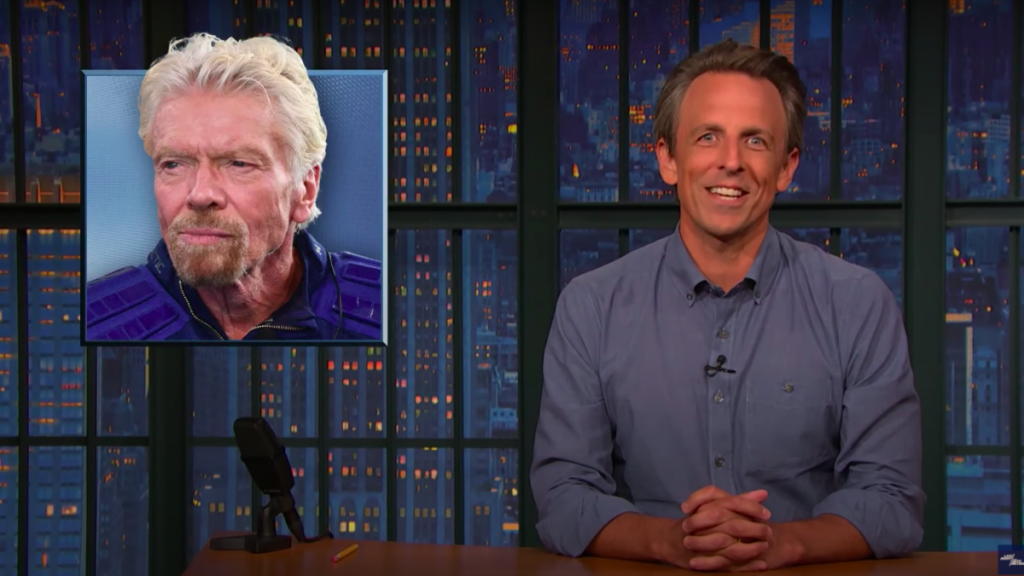 Seth Meyers on Richard Branson’s space journey: ‘That’s not a rocket, it’s just a plane that got cocky’

On Sunday, billionaire Sir Richard Branson, founder of Virgin Galactic, was successfully launched into space and back with a small crew on the Unity 22 mission.

Virgin Galactic’s spaceplane SpaceShipTwo flew about 80 kilometres (50 miles) into the upper atmosphere, the U.S. boundary of space, but seeing as there’s no internationally agreed limit for this (the closest thing is the Kármán line, 100 kilometres or 62 miles up, widely regarded as the beginning of space), it’s caused some conversation around whether the mission actually counts as going to space or not.

Late Night‘s Seth Meyers sat on the “not” side on Monday, making quips about the Virgin Galactic mission. “Sir Richard Branson yesterday became the first billionaire to travel to space. OK, did he though? I watched that launch and I would not call that space. Space is dark and has stars in it.”

Meyers showed a graph comparing the Virgin Galactic flight to SpaceX’s projected orbit for space tourism — which will notably cost a lot more for tickets.

“That’s not a rocket. It’s just a plane that got cocky. Just ’cause you touch net doesn’t mean you can say you dunked,” continued Meyers. “Branson’s like one of those guys who say, ‘Yeah, I’ve been to Texas,’ and then you find out he changed planes once at Dallas–Fort Worth. Call me when you’re on the moon, Richard.”

Well, space or not, Elon Musk’s bought a ticket.