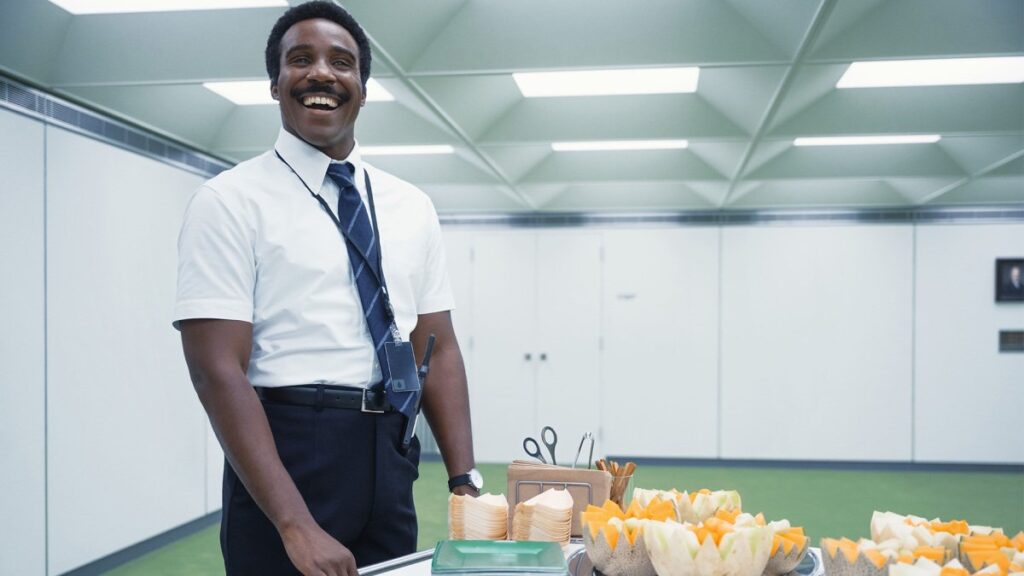 Since the “Innies” working on the severed floor of Lumon Industries had the severance procedure — which separates their work memories from their home memories — they don’t technically go home after work and eat dinner. Their “Outies,” or the versions of themselves with all the home memories, do.

The “Innies” reportedly get daily lunches, but the only foods we’ve seen them eat are sad breakfast buffets and snacks. Since severed employees spend their entire existence at work, Lumon makes sure to present all edible items — from vending machine edamame to sacred stacks of waffles — as major office perks. It’s a tragic reality, and it’s time we talk about the show’s cursed cuisine.

While we anxiously await the Severance Season 1 finale, we decided to rank the food seen at Lumon and beyond, from the least gag-worthy to most edible. If you’re Mrs. Selvig or Harmony Cobell, please stop reading this article right now. Everyone else, please enjoy.

Do NOT accept these cookies, Mark!
Credit: SCREENSHOT: APPLE TV+

Normally, I’m all for accepting cookies. But not cookies that were presumably baked by a conniving boss who quite literally has two identities. If Mrs. Selvig was Mark’s severed neighbor, then sure. Chow down on those chamomile cookies. But she’s not. She’s Lumon’s own Harmony Cobell, and she goes to work every day and toys with Mark and his colleagues, then comes home at night with all of her memories intact and poses as some innocent lady next door. She can’t be trusted, so neither can her cookies. Especially after she says, “I’m experimenting with chamomile, so no hard feelings if you gag.” In Episode 2, “Half Loop,” Mr. Milchick rolls into MRD with a special melon spread to celebrate Helly. The melons have been halved, carved into decorative bowls, filled with melon balls, and placed on silver platters. It’s a nice touch aesthetically, and I certainly appreciate the effort, but when you look past the presentation, this is just bland-ass honeydew and cantaloupe. Blech. (Sorry to IRL cantaloupe fan, Tramell Tillman, who plays Mr. Milchick.)

At one point Milchick says, “That melon isn’t getting any tastier,” and he’s absolutely right. Y’all have money for brain surgery but can’t throw together a better “welcome to the company” snack? Nah. Do better.

They cut open the good melon when you retire.
Credit: SCREENSHOT: APPLE TV+

Oh, OK. It looks like you have to retire — which may or may not mean die, we still don’t know yet! — to get the good fruit. Makes sense! In Episode 7, the melon-loving Milchick throws Burt a retirement party that features his famous honeydew and cantaloupe, along with watermelon, pineapple, punch, and some fancy-looking fruit kabobs. Extra points for presentation and variety, but to paraphrase the dad in My Big Fat Greek Wedding, “They’re all different, but in the end, they’re all fruit.” Give us the real goods.

Though I’m not a fan of Lumon’s bizarre melon agenda, I will say that the everyday snacks in the office aren’t too bad. In fact, they’re good. So good that I almost certainly would have ranked them higher than the egg bar based on personal preference alone, had Dylan not declared the egg bar “coveted as fuck.” (Severance stars Adam Scott, Patricia Arquette, and Zach Cherry seem to be vending machine fans as well.)

As noted earlier, per Dylan, “the egg bar is coveted as fuck.” In Episode 8, “What’s for Dinner?” Milchick leaves his melon balls behind and throws the MDR team a pre-Waffle Party Egg Bar Social. The event includes platters of deviled eggs — both regular and some that appear to be beet-pickled — several soft-boiled eggs in cups, a bowl of punch, and several random brown lumps that I originally thought were potatoes but are more likely Scotch eggs, because eggs.

After her first bite of a Lumon deviled egg, Helly says, “Jesus. This is actually…good.” That praise alone is promising, but we also stan the egg bar because deviled eggs are a perfect food to smash in the “no workplace romances” section of the handbook.

It’s also worth noting that in a Twitter Q&A, Severance director Ben Stiller expressed his abhorrence of eggs, but noted that they’re “necessary for the story.” HMM…

Episode 8 also invites viewers to their first Waffle Party. We’ve heard rumblings about the ultimate perk, which goes to the refiner of the quarter, since the start of the season. But I’m sure many imagined it would look like every other celebration at Lumon: Milchick rolling a cart of waffles into the office. A waffle party is definitely not that. Instead, one lucky (?) employee heads to the exact replica of Kier Eagan’s house and sits down to a sacred stack of three waffles. There’s syrup, extra butter, and a glass of milk on the table as well. And honestly? It looks appetizing. Unfortunately, the meal takes a turn when you hit the bottom of the plate, which bears the cryptic message, “Go now to the founder’s bed.” Yikes.

In conclusion: Waffles? Yes. Waffle party? No thanks! We’re good.

Severance‘s relationship with food is so strange that Outtie Mark was actually invited to a dinnerless dinner party in the pilot. Yep, no food. Just glasses of water and conversation.

“What a lot of people overlook I think is that life is not food,” a guest says. “Food is what? FUEL! Calories! It’s not the same thing.”

At one point, Mark’s brother-in-law, Ricken, says, “I would say, ‘Dig in.’ But in a way I think the lack of food has allowed us to do so on a much deeper level.” That’s bullshit, bud! Mark is hungry! He already gets subpar eats at work. He doesn’t need dinnerless dinner parties on the outside.

Thankfully, when the party ends, Mark’s sister Devon makes him a spectacularly gorgeous sandwich, featuring meat, a slice of cheese, and some crisp lettuce. The crust of the bread has seeds, there might be a little mayo on there, and Devon even cuts the sandwich in half and plates it for her brother. Most importantly, this sandwich has no connection to Lumon (that we know of), and thus, it’s the safest food on this show to eat. Top spot on the list. No brainer.