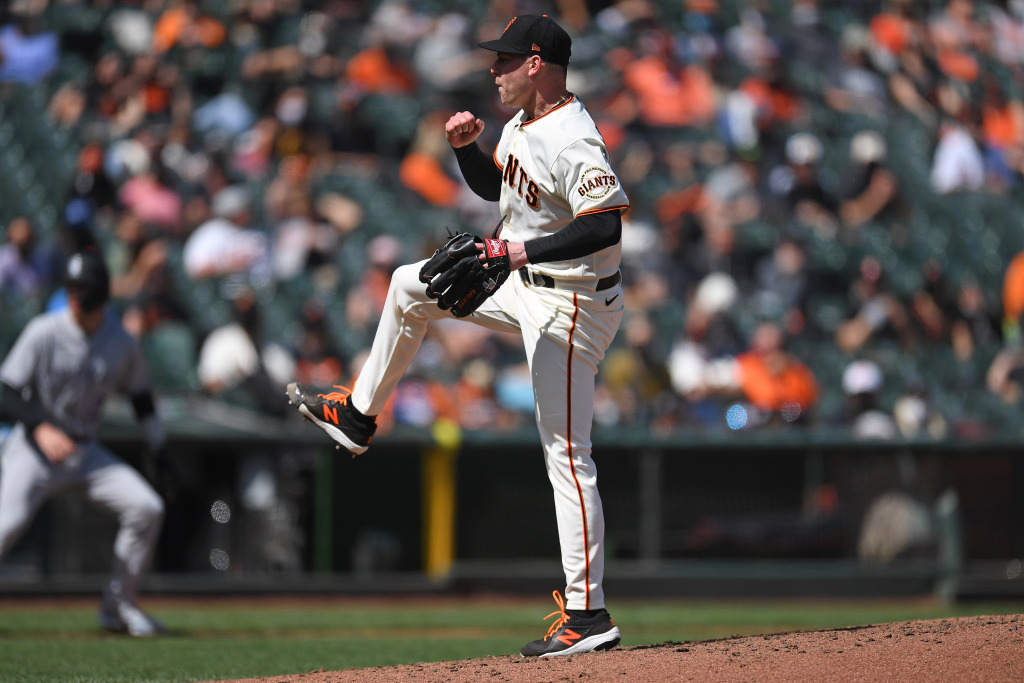 SAN FRANCISCO — Led by a lights-out starting rotation and an offense that’s blasting timely home runs, the 6-3 Giants cruised to a sweep of the Rockies at Oracle Park and have now won four straight games.

After going 29-31 in an abbreviated 60-game season last summer, the Giants are back over .500 in the Gabe Kapler era (35-34) and built off a series win over the Padres by limiting the Rockies to four runs in this weekend’s three-game set.

Behind six shutout innings from right-hander Anthony DeSclafani, the Giants won 4-0 Sunday and recorded the team’s first shutout since September 13, 2019, when Tyler Beede tossed eight scoreless frames in a 1-0 win over the Marlins.

A stellar outing from DeSclafani dropped the Giants’ rotation ERA to 2.24 on the season as the club has now had their starters log at least five innings in nine consecutive games to open the season. That streak is the third-longest in franchise history, trailing only the 2002 club (12 starts) and the 1937 team (10 starts).

“They’ve been outstanding,” first baseman Brandon Belt said of the starters. “We know from back in the day when we were winning championships that pitching and defense wins you a lot of baseball games. We’ve seen that early on here and they’ve really picked up our offense.”

A Giants lineup that has yet to break a game wide open gave DeSclafani an early lead to protect as left fielder Alex Dickerson launched a solo home run over the right center field wall before Evan Longoria drove in Brandon Belt from second on a single up the middle.

“I think we’re still not where we can be offensively, I think that’s one thing that has a chance to be exciting if that starts to click,” Kapler said. “Belt mentioned that before he went up for an at-bat, he just said, ‘I think we’re really close.’”

The Giants immediately forced Rockies righty Germán Márquez into a high-stress situation as he needed 36 pitches to complete the first, but they also took advantage of a defensive lapse from the Colorado starter and his infielders. With the count 3-2 on Longoria and the Rockies electing not to hold him close to the bag, Belt took an extended lead off first base and ran to second safely before Márquez realized what was happening.

“Eventually I looked up and I felt like I was halfway there so I went ahead and took off,” Belt explained. “The middle infielders were playing way off the bag, so it was one of those opportunities that worked out.”

Longoria sent the next pitch from Márquez into center field for a single, allowing Belt to race home for the second run of the inning.

Five innings later, Belt gave Márquez a parting gift as he launched a hanging slider over the right field wall to give the Giants a 3-0 lead. Belt’s first home run of the season left the bat with a 108.7 mile per hour exit velocity, which is his third-hardest hit ball since Statcast began tracking batted ball data in 2015.

After throwing five innings of one-run ball against the Padres on Monday, DeSclafani continued his impressive start to the season against a Rockies lineup that swung and missed on 17 of his 94 pitches Sunday. Of the six hits DeSclafani allowed, only one –a sixth inning leadoff double from Trevor Story– went for extra bases.

Right fielder Charlie Blackmon followed Story’s double with an infield hit, but DeSclafani still managed to keep the Rockies off the board by inducing a long flyout followed by a pair of key strikeouts.

With catcher Curt Casali sacrificing his body to block a handful of pitches in the dirt, DeSclafani was able to effectively change sightlines against Josh Fuentes and Sam Hilliard, who swung and missed at a 94-mile per hour sinker to end the top of the sixth. DeSclafani didn’t show much emotion on the mound Sunday, but he yelled and pumped his fist when he saw Hilliard’s bat miss his sinker, squandering Colorado’s best scoring opportunity against him.

“I would have been just as fired up if he would have popped up or grounded out,” DeSclafani said. “A strikeout is definitely a little bit sweeter, but getting out of that inning and not giving up a run, putting any rally they thought they might have had to rest and setting the tone for the rest of the game by stopping any momentum in that moment was huge.”

The 17 whiffs the Giants righty racked up matched the 17 Johnny Cueto generated in 118 pitches on Friday against the Rockies for the most by a Giants starter this season.

Prior to Sunday’s game, the Giants placed reliever Reyes Moronta on the 10-day injured list with a right flexor strain and recalled outfielder LaMonte Wade Jr. from the team’s alternate site roster. Wade started in center field and enjoyed the fifth multi-hit game of his career by finishing 2-for-3 with a double and a walk.

“I found out at 12-something that I was going to be activated,” Wade, who drove in from Sacramento on Sunday morning said. “So it’s been a crazy day, but it was a good day. Got to come here and then we got a win today.”

It’s not clear if Wade will stick around for Monday’s series opener against the Reds or if the Giants will add another reliever to a bullpen that’s down to two right-handers, but the team knows it will face a much tougher test against a Cincinnati Reds club that leads the National League Central.