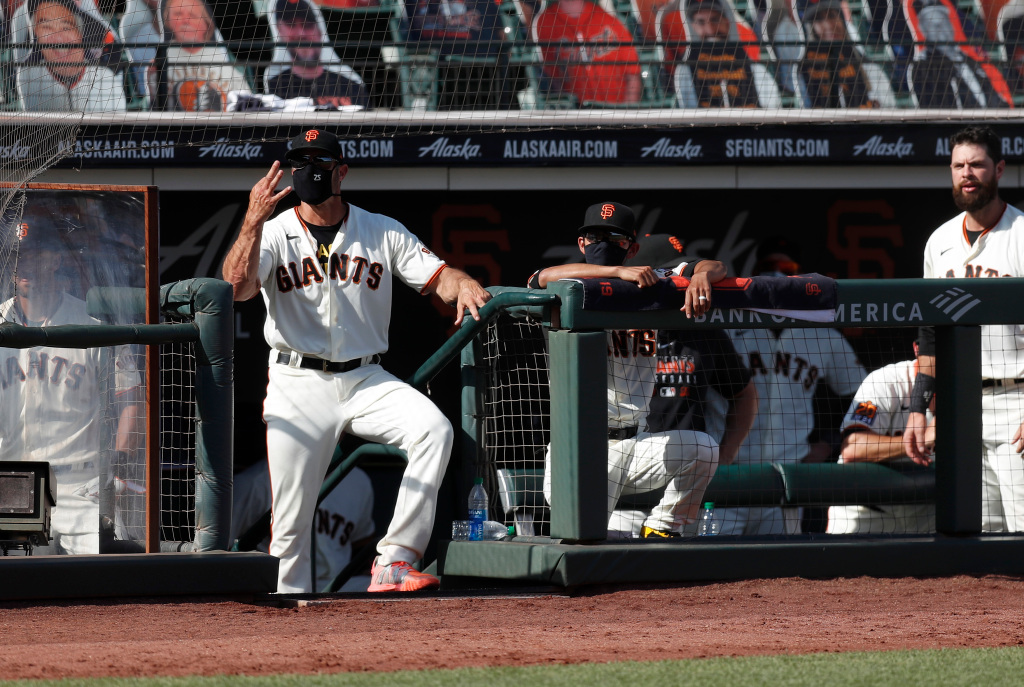 When the Giants overcame a four-run deficit to beat the Reds 7-6 on Tuesday at Oracle Park, their side of the box score looked more like a spring training game than a regular season matchup.

Giants manager Gabe Kapler used all six position players on his bench, subbing out his starting second baseman, left fielder, first baseman and center fielder in the middle innings and also sending up two other pinch-hitters to the plate.

“We kind of made a little line change there,” Kapler explained postgame. “Mid-game as you guys saw, our right-handed bats came through in a pretty big way.”

The Giants made up an early 4-0 deficit against Reds right-hander Luis Castillo with a pair of first-inning home runs, but took control of the game by creating favorable matchups against the arms who emerged from the Cincinnati bullpen. Two southpaws, Sean Doolittle and Cionel Pérez, were charged with earned runs as Kapler brought right-handed hitters such as Donovan Solano, Wilmer Flores and Austin Slater off the bench to gain platoon advantages.

One of the biggest moments of Tuesday’s win took place when Kapler sent Slater to pinch-hit for left-handed hitting center fielder LaMonte Wade Jr. against Doolittle. Reds manager David Bell countered the move by bringing in righty Carson Fulmer, but Slater redirected a 2-2 fastball into the right center field gap anyway for a go-ahead triple.

“At Oracle (Park), it’s tough to stay loose and hot when you’re not moving around for three or four innings,” Slater admitted. “To try to get up, try to hit in the cage and get stretched out when it’s freezing out, there’s some peculiar challenges to this ballpark but it’s something you get better with in time.”

Tuesday’s win was hardly the first time Kapler channeled a hockey coach and changed lines at a critical juncture of a game. When the Giants face left-handed starters, the manager will often leave Brandon Belt, Tommy La Stella and Alex Dickerson on the bench and send them to the plate as subs as soon as the first right-handed reliever appears.

Gaining an edge on offense is the goal, but not every team can plug and play most of their roster. With 14 position players and a bench typically filled with accomplished major league players thanks to Farhan Zaidi’s roster construction, the Giants have that luxury.

“It’s really impressive that we have the ability to do that and it’s a credit to our bench because everybody should be playing every day,” Mike Yastrzemski said. “That’s the crazy thing about our lineup is our guys are that talented, and for them to be ready at all times says more mentally about them than it does physically.”

A key component of the Giants’ strategy is Kapler’s willingness to make difficult and potentially unpopular decisions like the one he faced with second baseman Tommy La Stella on Tuesday night. La Stella started the game 3-for-3 with a double into deep right center field, but when Bell sent Perez, a lefty, in to replace Fulmer in the seventh inning, Kapler pulled his second baseman anyway.

The move to sub Solano, a reigning Silver Slugger Award winner, would have been criticized if the Giants lost, but Solano drew a leadoff walk and ended up scoring the deciding run later in the inning on a sacrifice fly hit by Flores, who entered against Doolittle in the sixth.

“That’s not the easiest thing to do,” Kapler explained. “That move is not about La Stella and his inability to continue to have great at-bats. It’s much more about Donovan Solano and he’s just been one of our best hitters for the last calendar year.”

Earning the trust of veteran players with this type of approach may have been a difficult task at first for Kapler, but the Giants appear completely bought in with a strategy that’s helped them to an 8-4 start through 12 games. The foundation was set when Kapler first began seeking platoon advantages in the middle innings during a 60-game season in which the Giants boasted a top-10 offense, so the combination of last year’s production and this year’s early wins have helped convince players the club is better off with regular line changes.

“I think it just proves how deep we are,” Slater said. “Our lineup, 1-14, with position players, we’ve got a ton of trust in those guys to get it done. I just think we have a super deep bench every night no matter who’s there.”