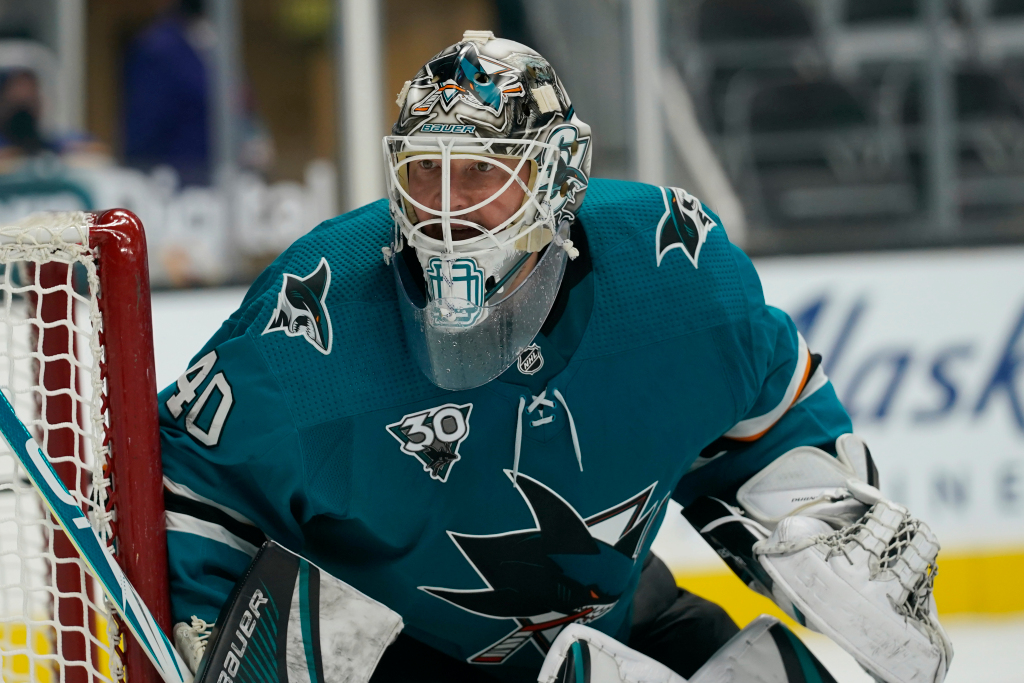 SAN JOSE — The Sharks dealt goalie Devan Dubnyk to the Colorado Avalanche on Saturday for defenseman Greg Pateryn and a fifth round selection in this year’s NHL draft, the first move made by general manager Doug Wilson in his reset of the team ahead of Monday’s trade deadline.

“We’ll be talking to everybody,” said Wilson, whose phone rang as he spoke with reporters, of the next two days. “We have cap space we’ve talked about using that.”

The Sharks still have other players like Dubnyk, 34, who are set to become unrestricted free agents this summer. Included in that group are forwards Marcus Sorensen, Matt Nieto and Patrick Marleau.

Nieto has a lower-body injury and does not have a specified timeline for a return, likely hampering any efforts to trade him for futures. Sorensen, though, has proven to be an effective penalty killer and remains one of the fastest skaters on the Sharks’ roster.

The Sharks, per CapFriendly, are also projected to have $11.3 million in deadline cap space, enough to act as a third party to absorb salary and help facilitate a trade between two other teams — with the caveat that it comes with a sweetener in the form of a draft pick or prospect.

“You’re always trying to add assets when you’re doing a reset like we’re going through,” Wilson said. “But make no mistake: We’re trying to compete to make the playoffs this year and compete every night.

“We know that we’ll be a good team come next September. But it’s nice to add the fifth round pick today. It helps us. If I can grab some more picks through using cap space, I certainly will. If there’s something that makes sense on the hockey side, you’re always listening to explore those deals.”

Dubnyk, 34, had a 3-9-2 record with a .898 save percentage in 17 games for San Jose but had not started a game since March 27 in Arizona, as Martin Jones has been in net for San Jose’s last six games.

With the move, Dubnyk goes from a Sharks team that is fighting just to get into the playoffs to a Stanley Cup contender in the Avalanche, who lead the West Division with a 27-9-4 record.

The Avalanche were looking for a veteran goalie to back up starter Philipp Grubauer for their playoff run, and Dubnyk certainly qualifies. For his NHL career, Dubnyk has a 250-204-54 record, 2.60 goals-against average, .914 save percentage and 33 shutouts.

With the Sharks eyeing the future and having two prospect goalies in Alexei Melnichuk and Josef Kořenář, who they believe are ready to take the next step, Wilson worked with Dubnyk and his agent Mike Liut to find a fit elsewhere.

Wilson and coach Bob Boughner both praised Dubnyk for his professionalism with the Sharks.

“That’s one of the reasons why we wanted to make sure that we got him to a place that fit well for him,” Wilson said. “He deserves that.”

Pateryn, 30, is a right shot defenseman and is set to become an UFA this summer. Originally selected in the fifth round in 2008 by Toronto, Pateryn has 41 points (four goals, 37 assists) and 166 penalty minutes in 278 NHL games with Montreal, Dallas, Minnesota and Colorado.

Pateryn’s contract carries a $1,175,000 cap hit for this season. The Sharks did not retain any of Dubnyk’s salary, as they were carrying half of his original cap hit of $4,333,333 million for this season, part of the deal they made with Minnesota when they acquired the veteran goalie in October for a 2022 fifth round draft pick.

It’s unclear when Pateryn will join the Sharks. Wilson said he was in Southern California to be with his wife for the birth of their child, and he was leaving the hospital with her Saturday morning.

“He’s a quality defenseman,” Wilson said of Pateryn, who is 6-foot-3 and 220 pounds. “We know him, he’s a big right shot d-man that’s played on some very good hockey teams.”

Jones will start again Saturday night as the Sharks (18-17-4) look to sweep their two-game series with the Los Angeles Kings at SAP Center. He made 32 saves Friday in the Sharks’ 5-2 win, which moved them to within three points of the Arizona Coyotes for the fourth and final playoff spot in the division.

Kořenář, 23, will backup Jones on Saturday. He had a 5-1-2 record with the Barracuda this season with an .898 save percentage and a 3.22 goals against average. A Czech Republic native, Kořenář is in his third season in the Sharks organization after he was signed as a 19-year-old in July 2017.

Considering their hectic schedule over the last month of the regular season, the Sharks are going to need their backup goalie, whether it’s Kořenář or Melnichuk, to play at least a few games. Starting with Monday’s game against the Anaheim Ducks, the Sharks play 16 games in 27 days, which includes four back-to-back situations.

Asked if he’s concerned about the message he’s sending to his players by replacing a veteran with inexperienced goalies while the Sharks are still in the hunt, Wilson said, “If we (thought) these two goalies weren’t ready for this challenge, we probably wouldn’t have done it. But we feel very comfortable in them coming in, being prepared. They’ve played enough hockey.”

Both Kořenář or Melnichuk have spent time this season with Sharks goalie coach Evgeni Nabokov when they’ve been on the taxi squad. This move, from the Sharks’ perspective, also gives them a chance to evaluate both goalies at this level to see if one of them is ready to make the full-time jump to the NHL next season.

“I talked to a couple of our players and they’re excited for (Dubnyk) getting the opportunity,” Wilson said, “but they’re also excited to see Josef and Alex get this opportunity also.”