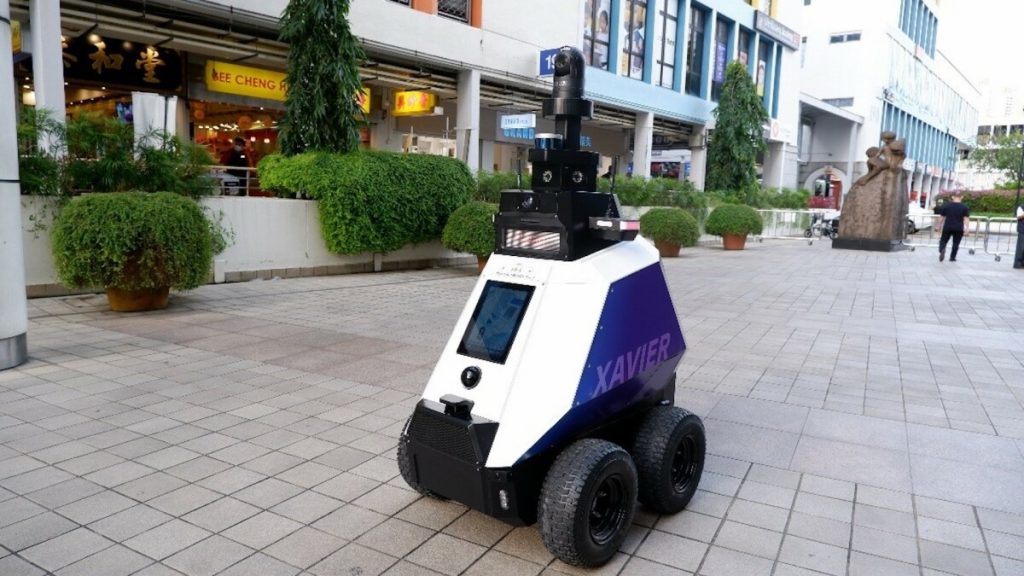 Singapore has patrol robots now! This should be fine.

Some robots were made to be your best friend. Some to unload 1600 boxes an hour. Some to do backflips, paint masterpieces. Some to inspect crime scenes. Others will tell you to quit smoking in prohibited areas and stop riding your motorbike on the footpath.

Singapore has started testing patrol robots that survey pedestrian areas in the city-state, where surveillance is a top and often controversial priority.

Named Xavier, the mall-cop robots will be autonomously rolling through the Toa Payoh Central district for three weeks from Sept. 5, scanning for “undesirable social behaviours” according to a press release (via Engadget) from the government’s Home Team Science and Technology Agency (HTX).

It’s a joint project involving five Singapore government agencies, including HTX, the National Environment Agency, the Land Transport Authority, the Singapore Food Agency, and the Housing and Development Board. The robots themselves have been built by HTX and the Agency for Science, Technology and Research (A*STAR).

The “undesirable social behaviours” Xavier will be on the lookout for include congregation of more than five people (as per the government’s COVID-19 measures), smoking in prohibited areas, illegal hawking, improperly parked bicycles within the Housing and Development Board’s Hub, and riding motorised active mobility devices and motorcycles on footpaths.

If you’re partaking in any of these activities while a Xavier rolls past, the robot will alert the project’s command centre and display a message corresponding to your offence.

The autonomous robot is fitted with sensors to avoid both moving and stationary obstacles including pedestrians, cameras (including low light cameras) to provide a 360-degree video feed, and a dashboard to show details like the robot’s battery and vitals. Its route will be determined in advance by officers, and government officers can respond to incidents in real time with a two-way intercom built into the dashboard.

So, where’s the data from Xavier’s cameras going, exactly? In its press release, HTX said the data will be “streamed to a video analytics system with artificial intelligence capability” where public officers can analyse it for insights over time or to deploy additional resources if necessary.

According to the agency, the project is aimed at reducing the human resources required for police foot patrols.

“The deployment of ground robots will help to augment our surveillance and enforcement resources,” said Lily Ling, the Singapore Food Agency’s director of East Regional Office, in a press statement. “For instance, the surveillance of illegal hawkers can be manpower intensive as officers need to be deployed at various areas across the island. The adoption of robotics technology can be used to enhance such operations, and reduce the need for our officers to do physical patrols.”

It’s not the first security robot Singapore’s rolled out for this reported reason. Local security services company Ademco launched a rentable robot security guard service in 2017 after a personnel shortage. Singapore has also tested drones for surveillance in the last few years, citing a lack of people to do the job.

It’s also not the first time a robot very much like Xavier has been used for security by Singapore police. It’s a similar robot to the Multi-purpose All-Terrain Autonomous Robot (M.A.T.A.R.), built by HTX and A*STAR I2R, that has been used as a patrol robot at major events like National Day and Chingay parades.

Security robots are an unsettling and impending reality across the globe, including the U.S. where companies like Knightscope have been offering up their K5 security robots for years (yes, it’s the company whose robot drowned itself; yes, the robot humans built an actual shrine for). As recently as 2020, Spot the robot dog from Boston Dynamics was used by NYPD at a crime scene. China has had police robots for years, equipped with facial recognition software.

We’re curious to hear how the RoboCop test goes in Singapore, though as a government surveillance project, we’re probably unlikely to know.