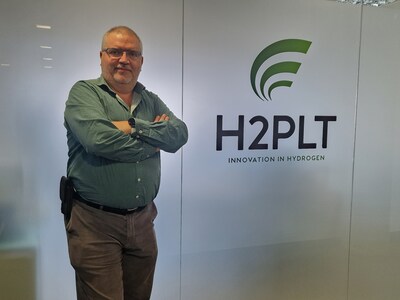 Founded and promoted by the entrepreneur Sisco Sapena, president and founder of the public company Lleida.net, H2PLT has developed a proprietary model that allows innovative uses of hydrogen in underdeveloped applications, such as its use as a vector for reelectrification and application in electro-power stations or hydro generators.

Its headquarters are in the city of Lleida.

The company seeks to promote electrified mobility and its innovative uses through “H2aX” applications and the development of small photovoltaic power plants dedicated exclusively to the generation of green hydrogen, through a model that can be replicated in a modular way in different parts of Spain and Europe.

To this end, it uses small photovoltaic farms and surplus solar electricity to manufacture green hydrogen by electrolysis. The hydrogen is stored and converted into electricity when needed by a fuel cell.

Its business model is based on the sale of hydrogen created by solar energy, its conversion into electricity during the night and sale to the wholesale market or through the network of own gas stations and hydrogenerators that will be created.

H2PLT WILL BE ABLE TO GENERATE ELECTRICITY FOR 160,000 PEOPLE PER YEAR.

H2PLT already has 80 hectares in the El Pedernoso Solar Park (Cuenca, Spain) and from next year will have the potential to generate 2.5 tons of hydrogen per day and a capacity of up to 40 MW.

At total capacity, according to a Power-to-Power model, which allows converting green hydrogen into electricity through fuel cells, the plant can supply renewable electricity to the equivalent of a population of 160,000 people per year.

The company plans to go public on Euronext in the second half of 2023, and is considering dual-listing in the United States at a later date.

Founded in February 2022 with an initial capital of 210,000 euros, its current team amounts to six people, including international reference specialists in the fuel cell industry.

THE FOUNDER OF H2PLT IS SISCO SAPENA

The founder and CEO of the project is Sisco Sapena, known for having founded in 1995 the listed Lleida.net, European leader in the industry of certified electronic signature, notification and contracting.

Lleida.net is listed on Euronext Growth in Paris, OTC Markets in New York and BME Growth in Madrid. It has subsidiaries in 19 countries and some 200 employees. It was the company that rose the most on the stock market in Europe in 2020, with a valuation of around 300 million euros, and has more than 3,000 shareholders.

The company plans to file at least 15 patents on new applications and processes linked to hydrogen generation.

Sisco Sapena is already a signatory of more than 220 patents on the subject, and his profile has been picked up by global media such as Financial Times, Bloomberg or Reuters.

Green hydrogen is produced using renewable energy sources, such as wind or solar power, to split water molecules into hydrogen and oxygen. It is a clean, renewable fuel for transportation, electricity generation and other applications.

At the moment, there is undoubted geopolitical interest on the part of the European Union to accelerate the adoption of hydrogen generation networks.

Recently, the European Commission announced the launch of the European Clean Hydrogen Alliance, in the absence of an ecosystem to address the energy needs required in the next 15 years.