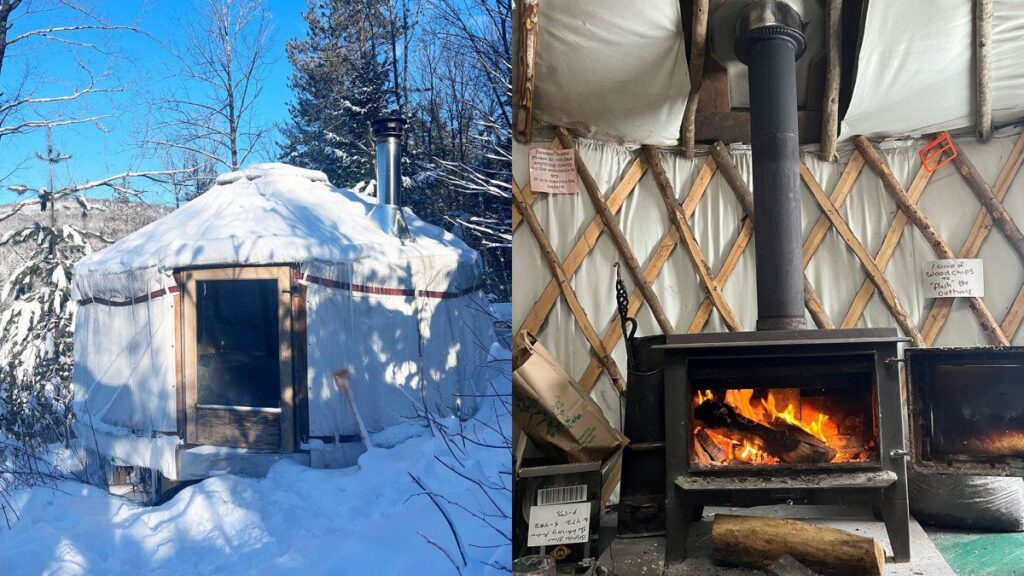 After weeks of enduring dark news stories and the heaviness that comes of feeling lost in a cycle that won’t let up, stepping onto the crunchy snow of rural Vermont for a weekend gave me an instant feeling of relief.

It’s not that I love the cold, or being in a remote part of an unfamiliar state that is very, very far north. In fact, my Arizona blood rejects the first sight of a snowflake, and I have watched enough horror movies to be wary of any secluded, wooded experience that involves my partner and me getting there via a small car with no 4-wheel drive.

I didn’t know we were also signing up for a weekend without service, because I tend to not think critically about any adventure in front of me — something I consider both a flaw and a strength. But once there, the inability to contact anyone outside of the confines of our AirBnb yurt, glance at a single news alert, or receive any emails or Slack notifications sent me into such an overwhelming state of joy that I’m still harboring its reverberations days after returning to the city.

I’m not the first person feeling the need for a digital detox or the bliss, if temporary, that can ensue. According to a report by the Pew Research Center, the majority of American adults have their phones on them all day long, disrupting their lives with an unprecedented presence of incoming notifications. Having that connectedness completely revoked, cold-turkey, was as shocking as the storm that swept over our yurt the first night. Over the weekend, despite returning to my phone multiple times throughout the day expecting to see notifications (thanks, muscle memory), I was met by nothing but silence and a dark screen. At first this was weird. Then it started to be … nice.

Then there’s the sleep. I am, at my core, afraid of most things. With wind whipping around our yurt, a fire blazing in our wood stove, and leaves crunching and snow sneaking down around us, I assumed sleep would be thoroughly out of the question. As more snow fell, the roof of our yurt grew heavy and bloated with it; eventually the snow became so heavy that avalanches of ice flushed down the sides of our building. All those unfamiliar sounds couldn’t possibly result in a restful slumber, I thought. But I was wrong. I hadn’t considered what it would mean not to have the physiological effects of the blue light of my screen glowing at me at all times, and the truth was, despite the very real fear I experienced that we could be featured as the main characters of a bad true crime podcast, I slept better than I have most nights in my own technology-filled home.

At first this was weird. Then it started to be … nice.

When I got back to the city, where my sleep was not nearly as restful, I found one study about how people who read a print book instead of an e-reader at night experienced better melatonin release, fell asleep faster, and felt more rested the following day. That was part of it, sure. But also, I realized that the technology break had allowed me to deepen my connection not only with my partner, but also with myself.

According to multiple studies, people feel more connected to others and also find others more empathically attuned when cell phones aren’t around during the conversation. While I cooked, I paid close attention to how the garlic on the stove simmered flavor into the beans. I felt the fire in the wood stove heat up the room, listened to my partner recount the intimate details of cutting firewood for said wood stove in the snow, and felt the sting of the cold wooden floor under my feet. I’m fairly certain I’d be unable to be so present if I was waiting on a text or a call or streaming Love Is Blind — or doing all three at once.

This was a temporary digital detox for me, a momentary break from the world of perpetual connection. As soon as we hit the road and got better service, I posted on Instagram, and I’ve spent hours since on TikTok. But the time away was an opportunity for me to check in with my own connection to technology and how it affects my relationships and experiences in the real world. By participating in a screen-free weekend that was completely out of my control, I’ve decided to take some of it into my life in Brooklyn. I’ll be turning my phone off for larger chunks of my day as a way to use real effort to reclaim my time.

Related Video: Let’s talk about meditation. For starters, what is it, actually?