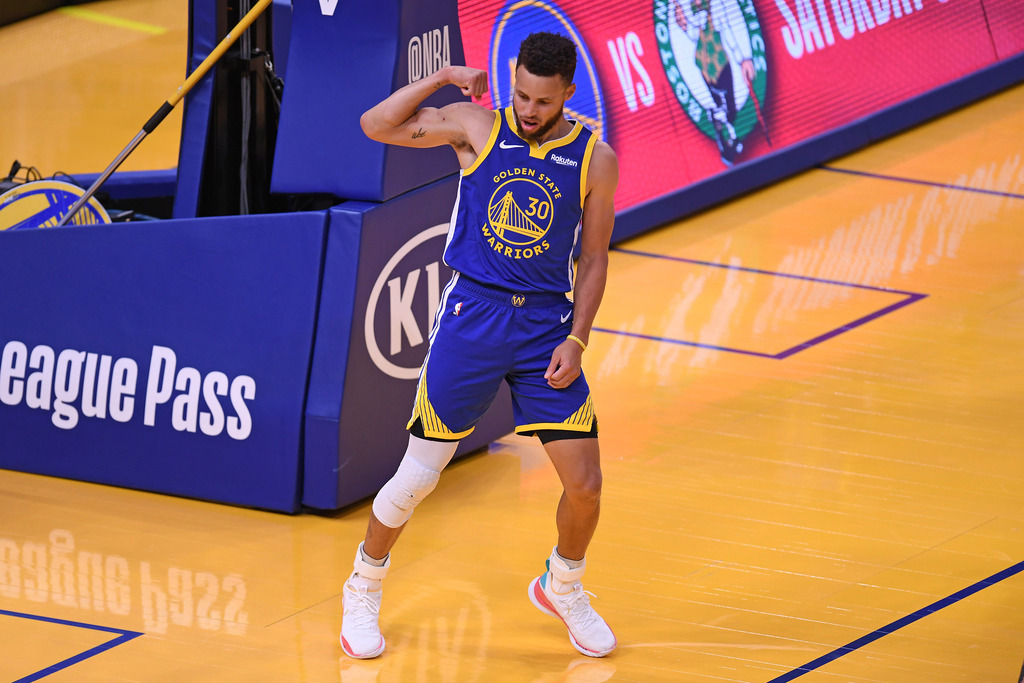 A week after overtaking Wilt Chamberlain as the Warriors’ all-time leading scorer, Stephen Curry is hotter than ever.

“I’ve seen Kobe Bryant early in his career, had a stretch where he went nuts,” head coach Steve Kerr said. “Michael Jordan had some stretches where he just scored like crazy, but nobody’s ever shot the ball like this … Even by Steph’s own lofty standards, this is above and beyond.”

As Curry slices through defenses and observers try to put his historic run into context, few want to stand in his way and more wild stats are summoned.

Curry is on pace to join Bryant (three times), James Harden, Elgin Baylor and Chamberlain (11 times) as the only players to average 40 points in a month.

“I don’t know if I’ve ever seen anything like the run that he’s been on,” said 76ers head coach Doc Rivers, who has coached against Curry for years. “There are guys I guess that have scored the points in the stretch that he has. But I guarantee you there is no one that has scored them the way he has. It’s been an art watching him play as of late. It’s just been a beautiful thing to watch.”

Added center Kevon Looney: “Steph is a one of a kind. I don’t think anybody in the league can do what he’s doing.”

This singular way of dominating a game is the reason Curry, 33, has won two league MVPs and powered a dynastic run of five straight Finals appearances.

“The things he can do on the court is special,” forward Andrew Wiggins said. “He’s one of a kind. When I was on a different team (in Minnesota), you could see it from afar, you see what he’s doing, you see all the creative things he’s doing. But being on his team, it’s totally different. Totally different. Watching it in person, every day, every game. Just the dominance of his presence on and off the ball. It’s crazy.”

What teammates, coaches and opponents are seeing is a new stage of Curry’s career, one in which he can dominate in old ways and new. No longer surrounded by high-level playmakers, Curry has had to call his own number more often. Perhaps the best offensive basketball player in the world, it hasn’t slowed him down. He runs more than 2.5 miles per game to get open, per Second Spectrum tracking data, indicating he still stretches the defense without the ball as well.

Without another All-Star on the roster, Curry had carried an offense that plummets to the league’s worst offensive rating when he’s not on the floor. The Warriors offense, which ranked near the bottom of the league through March, has ranked 15th in the league since the start of April and Golden State is 6-2 in its last eight games.

“It’s about being aggressive, obviously, but also letting the game come to you,” Curry said. “For me, that looks a certain type of way. I’m having a blast out there just playing basketball.”

It’s too late for Curry to get in on the MVP conversation. The Warriors are 29-29 and a fringe playoff team at best, and Denver Nuggets center Nikola Jokic and Philadelphia center Joel Embiid are in a two-man race as they lead teams near the top of the standings.

That said, no one in the league right now is more imposing than Curry, who outplayed both Jokic and Embiid in Warriors wins during this heated stretch. Come playoff time, there’s not a team that will want to be on the opposite side of Curry, who has the Warriors rolling and positioned to play postseason spoiler.