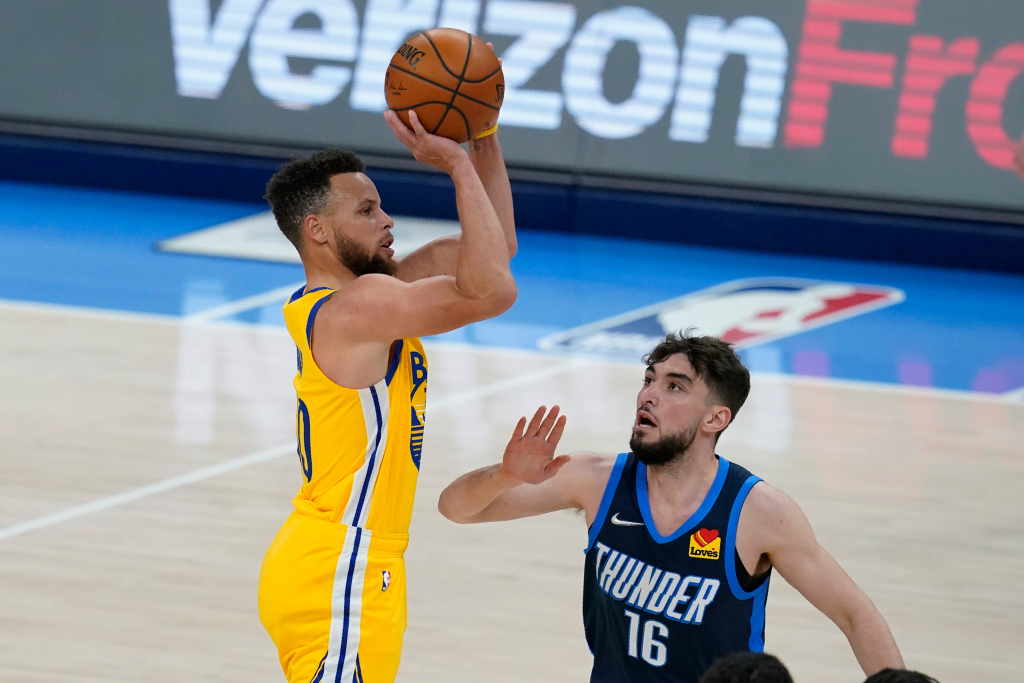 For weeks, Warriors head coach Steve Kerr has been predicting his team would string together multiple wins during this playoff push.

The Warriors (27-28) used another all-pro scoring effort from Curry, who has now scored 30 or more points in seven-straight games, a superlative performance from Green and blistering shooting night from 3-point range to cruise to an easy win over the Thunder (20-35).

Curry’s 25-point third quarter and Green’s 12 points, 10 rebounds and 16 assists in 30 minutes helped Golden State open up a 44-point lead before the final frame. The Warriors’ decisive 50-point third quarter was the largest scoring quarter for a team this season.

This was another stellar shooting performance from Curry, who poured in shots from all over the court, going 14-for-20 overall and 11-for-16 from beyond the arc. He’s now made 10 or more 3-pointers in two straight games — something only he and James Harden have ever done.

“It’s a man at the peak of his powers,” head coach Steve Kerr said. “He’s functioning at a level that very few human beings have ever functioned at in their particular field. It’s just beautiful to watch.”

Curry set the tone for his team, which shot 51.1% from beyond the arc and made 24 3-pointers in the game — one shy of setting a new franchise record. Kent Bazemore, filling in for Kelly Oubre Jr. (out with a wrist injury) as the starting guard made 3-of-4 from 3-point range and totaled 15 points.

With 17 games left of what has been a frustrating season, the Warriors have now won three straight games for just the second time all season and the first time since Feb. 26. Yes, this one came against a bottom-dwelling Thunder team in the midst of a rebuild, but the Warriors have notched quality wins over the Milwaukee Bucks and Denver Nuggets during a stretch in which they’ve won four of their last five.

Is this the breakthrough Kerr has predicted? Only time will tell, but with Curry playing as well as he ever has, Green shooting confidently, Andrew Wiggins (16 points on 6-for-12 shooting) and Jordan Poole (17 points and four assists) providing scoring contributions and the defense giving renewed effort, the ingredients are there for Golden State to extend this run as they go into Thursday’s game in Cleveland.

“When we play high-level defense like we did the past few games, the offense kind of takes care of itself,” said Kevon Looney, who started at center for the injured James Wiseman. “I think everyone’s comfortable in their roles. Now, it’s just time to go out there and put some wins together.”

Gary Payton II gets a look

Playing the most minutes since arriving in Golden State on a 10-day contract, Payton II finished with 10 points and four steals in nine garbage-time minutes. Kerr was impressed with Payton II’s defensive effort.

“My assistant coaches have been telling me when we put him in, we’re not going to want to take him out because of his defense,” Kerr said of Payton II, whose 10-day contract expires April 17. If the Warriors decide to extend his try-out, they can sign him to a second 10-day deal.