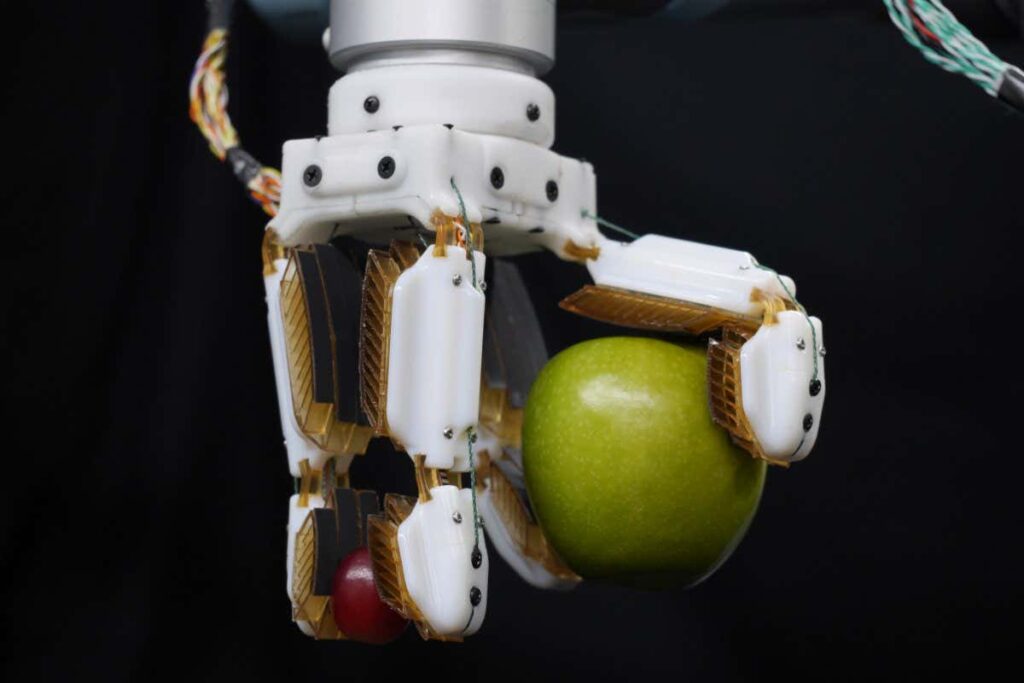 Robotic hands often trade strength for adaptability, but a sticky coating inspired by gecko feet has given this artificial hand a delicate touch

Mechanical hands with human-like fingers are more adaptable than the simple two-pronged clamps found on industrial robots, but they struggle to match their strength. Now a robotic hand with sticky rubber skin inspired by gecko feet combined the features of both: it can delicately pick up a grape and also lift heavy objects.

Geckos’ feet are covered in tiny hairs that split into even smaller strands that each create a molecular attraction to the material the animal is climbing on.

Mark Cutkosky at Stanford University in California and his colleagues have previously created materials that mimic the way a gecko’s foot sticks to smooth surfaces and then used them in robots, some of which are designed to latch on to a satellite’s smooth surface in space.

Now, Cutkosky and his team have improved the design of their latest gecko-inspired material and applied it to a robot hand. The material evenly spreads the load associated with the object being manipulated, which prevents the object’s edges peeling away from the robot hand, which can undermine adhesion. The hand is also programmed to grip objects in a way that maximises contact area, using the pad of the fingers rather than the fingertips.

The hand has four fingers, each powered by two motors and equipped with force sensors, and is able to pick up and manipulate heavy objects many times its own size. But it is also able to carry out delicate motions like lifting eggs from a box without cracking them, or picking grapes from the vine without squashing them.

Cutkosky says that the adhesive is inspired by geckos, but it has now surpassed them in performance. “[Geckos] do a good job, but not a fantastic job,” he says.

If you attach to an object in the way geckos do, “you sacrifice a fair bit of the potential performance”, says Cutkosky. “Gecko [feet] are actually quite fussy about how they’re loaded.”