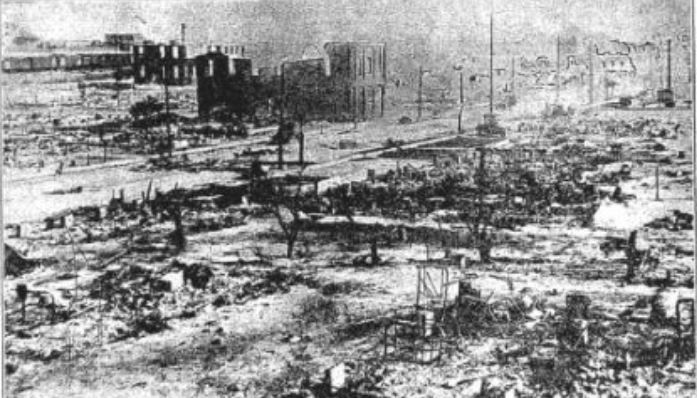 “In 2021, we will observe the 100th anniversary of the Tulsa Race Massacre – the deadliest and most destructive massacre in our country’s history,” wrote Oklahoma State Sen. Kevin Matthews (D-District 11), who chairs the 1921 Tulsa Race Massacre Centennial Commission.

While reports of the time said 36 people were killed in the Race Massacre, modern reports show that on those bloody, late spring days in 1921, a series of events took place that led to the death of at least 100 to 300 of Tulsa’s, mostly African American, residents.

Beginning with an elevator ride of a Black man- Dick Rowland- and White woman on May 30, 1921, to gossip gone wrong, to arresting Rowland, to tensions rising at the courthouse due to concern about potential lynchings, to White Tulsans being armed with weapons and burning Greenwood down, to the arrest and days-long detainment of most of Greenwood’s residents, the Tulsa Race Massacre is a dark part of American history that many say must come to light and be addressed.

“It takes courage to be transparent about our history, including both famous and infamous events. We must address and discuss the facts as they have happened so we can ultimately stand together across racial, geographical, political and cultural lines. The call for unity can facilitate education and enable greater understanding for future relations among competing and complementary interests,” Sen. Matthews said.

The 1921 Tulsa Race Massacre Centennial Commission was birthed from Oklahomans working to face their bloody truth by educating the masses about the racist history of those late spring days 100 years ago and honoring  the legacy of Black Wall Street.

“The projects of the 1921 Tulsa Race Massacre Centennial Commission will educate Oklahomans and Americans about the Race Massacre and its impact on the state and Nation; remember its victims and survivors; and create an environment conducive to fostering sustainable entrepreneurship and heritage tourism within the Greenwood District specifically, and North Tulsa generally,” according to the Commission’s website.

With only a century passing since the race massacre, there are living Tulsans who remember the incident or are descendants of victims.  Survivors and descendants of the 1921 Massacre are hosting a Black Wall Street Legacy Festival May 28-30 to commemorate the horrors of May 31 and June 1 100 years ago.

“The Black Wall Street Legacy Festival is the Greenwood community’s tribute to the massacre victims who are no longer with us. It’s a love letter to those who have held on for dear life, and a chance to inspire the next generation to take the baton,”  said Dr. Tiffany Crutcher, one of Festival’s lead organizers who is a descendant of the massacre.

The Festival will include panels about current community needs, the aftermath of the massacre and the status and hopes for the future of Black Wall Street, as well as musical performances curated by Steph Simon, founder of World Culture Music Festival.  Performances include Gospel singer John P. Kee and the Hip-Hop collective Fire in Little Africa.

Crutcher, who created and serves as executive director of the Terence Crutcher Foundation after a Tulsa police officer fatally shot her twin brother in 2016, emphasized the importance of uplifting the survivors and descendants of victims of the massacre.

“Each day that we have with the massacre survivors is a gift. It’s important to remember that folks have clawed through pain, trauma, and erasure to arrive at this Centennial,” Crutcher said.