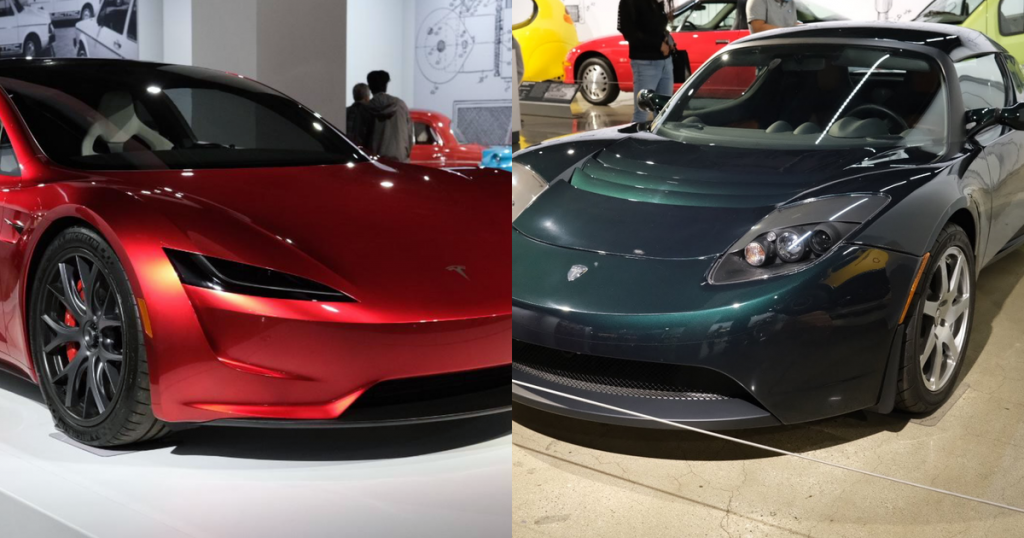 Tesla Roadster Gen 2 vs. Gen 1: See how much has changed for Musk’s elusive first car

The first time Tommy Nguyen saw a second-generation Tesla Roadster in person was four years after he put down a $50,000 deposit for the car — and he had to drive over four hours to check it out in a museum.

Security guards wouldn’t let him inside or even lean slightly over protective ropes to get a better look earlier this week at the Petersen Automotive Museum in Los Angeles, where a bright red prototype of the all-electric car is on display through June 2.

Famously, Tesla doesn’t have car dealerships so when the Las Vegas resident decided to reserve what was promised to be the fastest production car in the world, he had to put down that chunk of cash sight unseen in 2017. Then the production timeline for the speed demon got pushed back, from starting in 2020 to 2022.

“They keep delaying and delaying. I’ve been waiting for this for a very long time,” Nguyen, who also owns a Model Y, said as he ogled the car.

Musk made a splash in 2017 when he surprised an audience awaiting his new semi truck with a prototype of a revamped Roadster. He topped that reveal in 2018 when he shot an original Roadster convertible into space with an astronaut dummy in the front seat, while blasting David Bowie’s “Space Oddity” on the livestream. Then earlier this year he joked (maybe?) that he wanted to turn the Roadster into a hover car, even as he kept extending production start times.

Although it’s a reimagining of Tesla’s first car, the prototype of the second-gen Roadster is a far cry from the original 2008 model also on display at the Petersen. The shiny new sports car sits on a pedestal, playing backdrop for drooling selfie takers. Meanwhile, the dark green original looks sad and lonely, tucked away from its popular offspring on a corner wall. On Thursday, Musk tweeted that when the Roadster comes off assembly lines, it’ll look different than the prototype. How different, he didn’t say, only hinting that it will be “better.”

The 2017 prototype doesn’t have side mirrors or door handles. Nor does it have the promised speed-juicing rocket thrusters that Musk mused would maybe even let the car fly. Those will supposedly be available with a “Space X package” that can get from 0 to 60 mph in 1.1 seconds, according to a plaque at the museum spotted by Electrek that wasn’t installed when Mashable visited. Tesla’s website says the car can go 0 to 60 mph in 1.9 seconds, but that’s noted under “base specs.” Musk’s “world’s fastest car” claims have yet to be publicly put to the test.

The new Roadster is Tesla’s own through and through, while the first was built on a Lotus Elise chassis, a choice Musk would later regret. The prototype for what will eventually be the 2022 Roadster has four seats, compared to the two in the 2008 model. Although it doesn’t look like there’s much legroom in the back row. A Tesla rep wouldn’t provide interior photos, and there was no way to get a good shot due to the museum setup.

The prototype’s steering wheel looks like it’d fit right in at an arcade; it’s nothing like the original’s helm, but it’s similar to the steering wheel in the 2021 Model S and Model X. The speedster also has a humongous vertical tablet on the dash between the front seats, where some HVAC vents are in the 2008 car. Back then, the iPad hadn’t even been invented yet. Unfortunately, Tesla hasn’t shared any details about what its infotainment system in the new Roadster will offer, nor whether its display will stay vertical, but in its other cars, the tablet provides maps, web browsing, Netflix, YouTube, and Twitch streaming, video games, karaoke, charging information, and fart sounds.

In 2008, the Roadster was an anomaly. Now, you hear about a new EV all the time, made for a variety of consumers from truck and SUV lovers to luxury buyers. Several automakers have also pledged to go all electric by 2030. Despite increased competition, Musk is skilled at keeping the Tesla hype alive and when it comes to electric performance cars, the new Roadster’s specs still stand out, especially so if that 0-to-60 in 1.1 seconds package pans out.

“When you drive this car, people look at you,” said Nguyen, a retired real estate developer, as he explained why he reserved a 2022 Roadster. “This car is for fun driving and to show off to your friends.”

As Nguyen and other Tesla fans eagerly wait for the 2022 Roadster to hit the road, here are some more photos of the 2008 Roadster and its progeny.

To see the Roadster prototype, you must purchase tickets to the Petersen Automotive Museum in advance. Tickets are $16. Also on display are a variety of vintage race cars, motorcycles, and off-roaders, as well as movie-famous vehicles like the 1989 Batmobile and a 1981 DeLorean from Back to the Future.