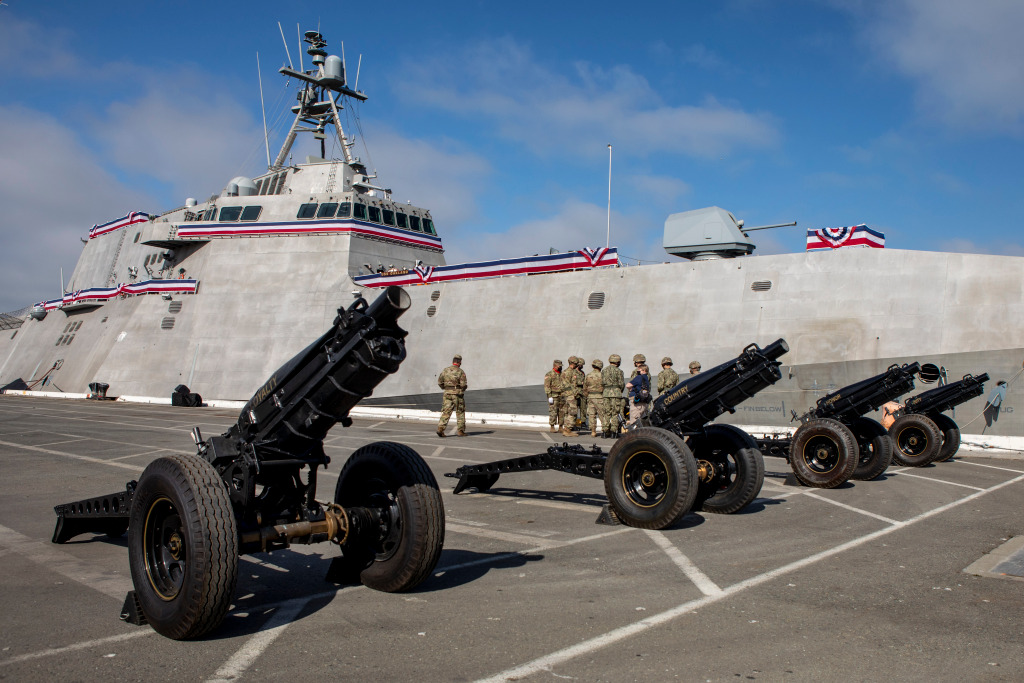 OAKLAND — The USS Oakland was commissioned in its namesake port Saturday morning in a ceremony steeped in centuries of naval tradition, with some uniquely 2021 spins.

The ceremony was attended by military veterans, Oakland Mayor Libby Schaaf, Acting Secretary of the Navy Thomas W. Harker and several guests watching from their cars for the U.S. Navy’s first-ever drive-in commissioning ceremony, an adjustment necessitated by the COVID-19 pandemic. Other guests watched a live broadcast of the ceremony online.

“She’s a marvel of engineering that will extend our capability for any mission across the blue water, from shoreline to shoreline,” Harker said, before officially commissioning it on behalf of the president.

The ship, an Independence-variant Littoral Combat Ship, was built and christened in Alabama and will be heading to its home port of San Diego. It is the third ship named after Oakland. The most recent was a light cruiser built in San Francisco in 1943 and which engaged in nine battles during World War II before being decommissioned in 1951. Robert Almquist, one of the last remaining sailors in that USS Oakland joined in via a video message, sending the sailors his best wishes.

“I would love to be there with you all,” he said.

The commissioning ceremony began with a 19-gun salute from four M1N1 Howitzers — named Loyalty, Country, Honor and Duty — courtesy of the U.S. Army National Guard and included a helicopter flyover and water cannons from U.S. Coast Guard vessels. It was the culmination of a years-long journey that included a grueling training and certification process, Commander Francisco X. Garza, captain of the new ship, told the crowd. It also included several difficult storms, including a reverse storm surge — “don’t ask,” Garza cautioned.

“We seem to be a magnet for hurricanes,” he quipped. “In fact, I was half expecting storm clouds overheard this morning, but it turned out to be a nice day.”

Praising the ship’s sailors, known as plankowners because they form the crew during its original commissioning, Garza also pledged to do the ship’s namesake city proud.

“Please know that these sailors have laid a rock-solid foundation that will be the roots for this ship’s success in the years ahead,” he said. “These sailors will represent Oakland, our Navy and our nation well and will make you all proud.”

Most of the crew watched the commissioning from land, as the ship’s pennant and colors, as well as the flag of the secretary of the Navy and the city of Oakland’s flag, a green oak tree over a field of yellow, were hoisted. Behind it was the Bay Bridge and the San Francisco skyline.

There are no official deployment orders for the USS Oakland, but it could eventually be headed to the South China Sea, a geopolitical hotspot where the similar USS Gabrielle Giffords was deployed until recently, said Matthew Collette, professor of naval architecture and marine engineering at the University of Michigan.

Littoral Combat Ships — littoral meaning areas along a shore — were intended to be lower-cost and smaller-crewed ships that could be quickly adapted to many different near-shore missions with specialized crews joining depending on the task at hand, for example to search for submarines and mines or patrol for small crafts.

“That didn’t really work out,” he said.

It’s hard to have a crew that isn’t always together, and the swappable modules have been in a protracted development, Collette said. The issues have been particularly severe on the Freedom-variant Littoral Combat Vessels, while the Independence-variant ships such as the Oakland have been far more reliable. But the ship excels at speed, another of the original goals for the new class of vessels.

“The Oakland is a trimaran, it’s a very unusual design, it has three hulls joined together and it gives you a really high speed and it also gives you a ton of room to store things,” Collette said. The Oakland can reach speeds of 40 knots, equivalent to about 46 miles per hour.

The Littoral Combat Ships cost $588 million each to build, according to USNI News, and about $70 million annually to operate, according to Defense News.

Wherever the Oakland is deployed, it takes with it the invocation from retired Navy captain, Bishop Michael Barber.

“May her presence on the high seas be a testament of peace and freedom,” he said. “May her guns never have to be fired in anger.”