Out of its world premiere at the Cannes Film Festival this summer, Wes Anderson’s latest film was condemned by some critics who decried it as his most indulgent work yet. They’re not wrong. Rich in twee details, a nostalgic soundtrack, and a sprawling cast full of the writer/director’s favored troupe (plus many, many more), The French Dispatch is dripping in Anderson’s signature style. Of course it’s indulgent. It’s a love letter after all.

Named for a fictional magazine, The French Dispatch brings to life the pages of its final issue. A rapid yet hushed voiceover swiftly introduces audiences to eccentric editor-in-chief Arthur Howitzer, Jr. (Bill Murray), a Kansas boy who became an American ex-pat, encouraging misfit writers within a humble office in a charmingly tawdry French town. Almost as swiftly as we meet him, we’re informed he has died, and what follows will be the last issue of the magazine, which will serve as his obituary. It’s a grim beginning, perhaps. But Anderson’s characters have never shied away from the agonies and indignities of life. So, they soldier on with their stories in tidy defiance of the inevitable.

A series of vignettes roll out. In one, Owen Wilson plays a bicycle-riding reporter, who finds wonder in the corruption of a town called Ennui (because of course it is). With her hair teased into an auburn bit of abstract sculpture, Tilda Swinton delivers a history lesson on how an unrepentantly violent but lovestruck prisoner (Benicio Del Toro) became the toast of the modern art scene. With a masterfully clipped delivery that reflects a heavy world-weariness, Frances McDormand portrays a political writer, who loses herself in a youth revolution that’s relatable but clumsy slogan is “The children are grumpy!” Lastly, Jeffrey Wright, whose rumbling voiceover sounds like he’s savoring every syllable, shares an outrageous restaurant review that involves gunfire, a chase scene, and the kidnapping of a precocious child obsessed with crime-fighting.

In each section, the “writer” overtakes the voiceover, which coats every scene with Anderson’s verbal fireworks of barbed wit and sour egos. Sometimes the words come in such a flurry that you might miss a few. But the context is clear through the wonderfully illustrated world realized in an enchanting production design. Rejecting any attempt at realism, Anderson’s settings all look like they’ve been plucked out of a storybook or perhaps a New Yorker cartoon. Buildings boast impractical staircases. Offices bloom in bright yellows, pinks, and playful wallpaper prints. Even a jail is rich with texture, thanks to padded walls, gridded-fences, and cell blocks that layer the boxy design over and over to reflect the depths of imprisonment within the depth of field. 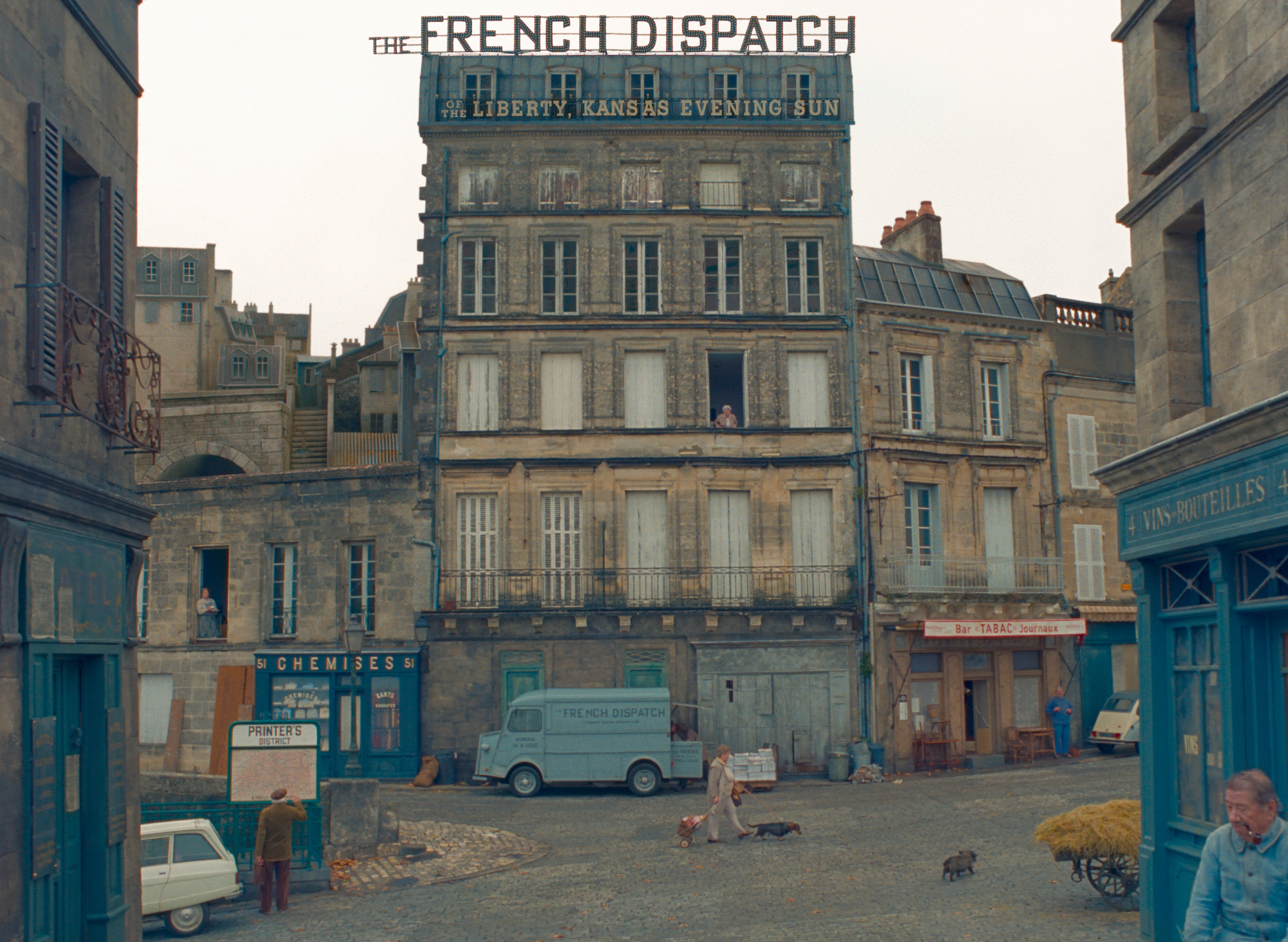 Displaying Anderson’s fondness for the imagined finesse of the 1960s, the costumes are sharply cut suits, boldly vivid gowns, uniforms precise and noble. The wilder characters might boast unkempt curls, or a collision of hard and soft, a leather jacket paired with a school girl’s skirt and a petite make-up compact. Even the madman has a sense of style, his straightjacket paired with flashy splashes of paint. Then, to all this canvas and characters, Anderson leaps from full-color to black-and-white and back again with little warning or perhaps even apparent cause. (Some scenes are clearly using color as a revelation, others feel more matter-of-fact.)

Then, on top of all this, there is a parade of characters, some heroes (Timothée Chalamet, Steve Park), some villains (Edward Norton, Saoirse Ronan), many just bit roles (including Anderson alums Jason Schwartzman and Willem Dafoe). It could be a gleeful game pointing out all the heralded performers and beloved character actors who swan across the screen, keenly falling into step with Anderson’s willfully stilted performance style. But just because these performances are not emoting doesn’t mean they’re not emotional.

In one prison-set scene, Del Toro is outwardly stoic as he details past pain and hopelessness for the future. But the words versus the performance underlines just how numb this poor painter has become to his own ache. So when he concludes with a shrug, “That’s why I signed up for clay pottery and weaving,” it’s hilarious but also painfully humane. When facing the darkness of ennui and depression, any diversion, any escape can sound ludicrous on its face. And yet it might the very thing that saves us.

Finding your peace and purpose through craft is the core of The French Dispatch. It tells the stories of a painter, a poet, a chef, a motley band of writers, and their thoughtful editor. But within each story, no artist is an island. The painter has his muse. The poet has his sparring partner. The writers have their editor. So, each vignette concludes with Murray giving notes, a trim there, a tweak here, and in the most moving scene a plea to add back in a cut paragraph that feels so personal it’s almost obscene. Such nakedness is also celebrated in the film, sometimes literally — as is the case with prison guard/nude model Simone (Léa Seydoux). Repeatedly, these writers have to combat with what it means to report what they’ve seen. Should they choose a side? Should they get involved? How can you ever be truly objective? Is cutting who you are — flaws and all — out of the piece a noble choice or a cowardly one?

In their stories, perhaps we are meant to see our own. I certainly did, which made every scene between writer and editor feel joltingly personal. Beyond us though, The French Dispatch is Anderson’s unabashedly gushing love letter to writing, to writers, to collaboration, to editors, and to those who give their lives painting, cooking, drafting, and otherwise chiseling out a piece of art for the world to see and pick apart. Creation is a sloppy process. So perhaps the meandering nature and the “indulgent’ design is a knowing part of the message. Maybe Anderson is challenging us not just to sit back and enjoy, but to be an editor, reading and re-reading his text until we feel we truly know it’s every nook and cranny. Then, it’s not just his piece, it’s ours too. This is what makes the film’s final moment, one of silence that bustles into conversation, simply magnificent. Because in the end, The French Dispatch is not just about the craft we pour ourselves into, but also the legacy we leave behind.

The French Dispatch opens in theaters on Oct. 22.