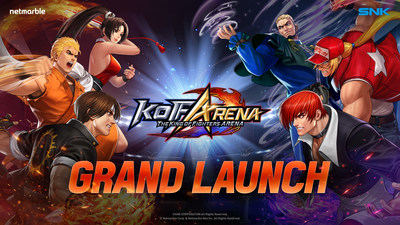 Fans can download THE KING OF FIGHTERS ARENA via iOS, Android and PC starting today
More than 2 million anticipated fans pre-registered around the world

LOS ANGELES, Nov. 14, 2022 /PRNewswire/ — Netmarble, a leading developer and publisher of high-quality mobile games, has launched its all-new real-time fighting PVP game THE KING OF FIGHTERS ARENA. This follow up to THE KING OF FIGHTERS ALL STAR game, features the return of the fast-paced fighting gameplay players love with simple controls for arcade style combat and is now available on Google Play, App Store as well as a PC version.

THE KING OF FIGHTERS ARENA will feature blockchain integration that allows players to purchase their own NFT controller, enabling faster growth, and experience of the world of Tokenomics in this Cryptobattle. The controller can be purchased through MARBLEX NFT Launchpad or the in-game store for a limited time, with more details available on the official game page.

Rewards feature the Fighter Illust Collection and Fighter Background Collection, including the characters of Iori or Leona, which can be used to decorate the player’s game lobby, as well as a limited version of the Special Title and Title Panel.

Netmarble is also excited to announce that THE KING OF FIGHTERS ARENA has surpassed two million pre-registrations around the globe. It is now available on Google Play, App Store as well as a PC version globally. Players will experience fast paced PVP battles across the globe in optimized environments provided by Netmarble’s stable management.The title will support English, Traditional Chinese, Indonesian, Thai, Spanish, Italian, French, Portuguese, Russian, and German.

Established in Korea in 2000, Netmarble Corporation is a top developer and publisher pushing the boundaries of the mobile gaming experience with highly innovative games including Seven Knights 2, Ni no Kuni: Cross Worlds, MARVEL Future Revolution, Lineage 2: Revolution, The Seven Deadly Sins: Grand Cross, Blade & Soul Revolution and MARVEL Future Fight. As a parent company of Kabam and SpinX Games, and a major shareholder of Jam City and HYBE (formerly Big Hit Entertainment), Netmarble strives to entertain audiences around the world with a variety of mobile games based on its powerful franchises and collaborations with IP holders worldwide. More information can be found at http://company.netmarble.com