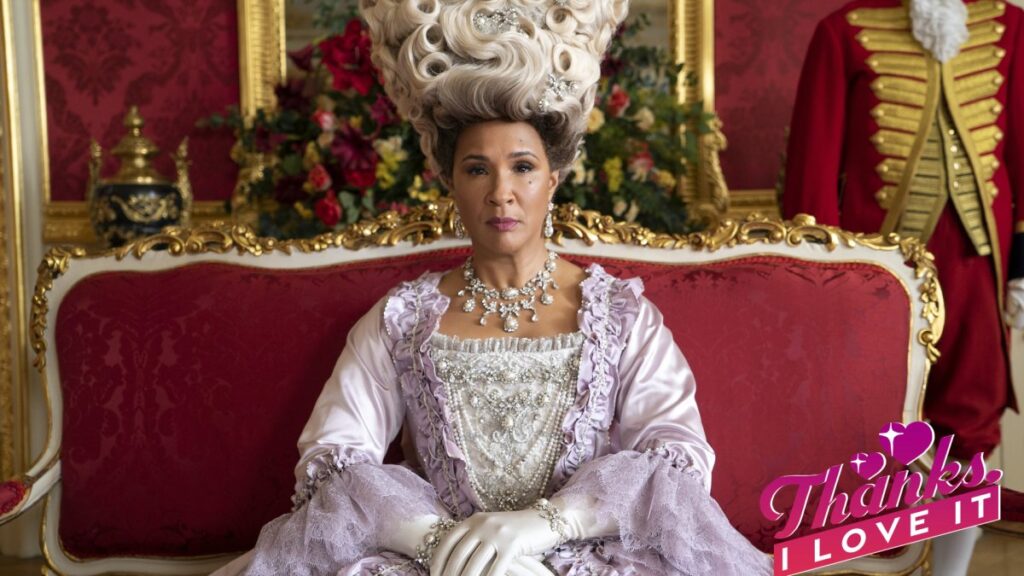 Bridgerton is an easy show to love. It’s romantic and sexy, with great costumes and plots that zip along until each season ends with a happily ever after. Its popularity isn’t difficult to understand, but augmenting its appeal as fun streaming entertainment is the massive amount of work by the Bridgerton teams that carefully weaves historical fact into dreamy fiction.

Bridgerton takes place in the Regency period, a point in English history ingrained in popular culture through the works of Jane Austen, the end of the Napoleonic wars, and the eponymous regency of the “mad” King George III (yes, the one in Hamilton). The show embellishes the society and fashion of the era to provide viewers with a feast for the senses, even if the gowns, balls, and plots are occasionally anachronistic. But one character’s odd fashion sense comes wholesale from the annals of history, leading to some of the show’s most impressive costume, makeup, and hairstyling moments.

We speak, of course, of Queen Charlotte. Played by Golda Rosheuvel, Charlotte rules the ton with a diamond fist, appearing most often in a series of towering wigs and massive, hoop-skirted gowns that exude the wealth and privilege of her royal status. She’s consistently exquisite, and yet dressed entirely differently from the rest of the cast — for a very good reason.

By the early 1800s, stylish members of the upper class had moved on from the hoops and ruffled sleeves of the queen’s older, Georgian fashions. The new look was inspired by classical statuary, with high-waisted gowns that showed little of a woman’s shape but could be accessorized to evoke the casual, dreamy vibe of a Greek goddess. These are the outfits often sported in white or light blue by Daphne in Season 1 and in pink, blue, and purple for the Sharma sisters in Season 2.

If flowy, high-waisted gowns were the fashion by 1813, why then does the Queen still dress like it’s 30 years in the past? The brilliant answer to that question comes from history itself, and the real-life Queen Charlotte upon whom the character is based. Namely, that she was considered an unfashionable, stuck-in-the-past grump even in her own time.

[Charlotte] was considered an unfashionable, stuck-in-the-past grump even in her own time.

The real Charlotte had a host of her own problems, only some of which have been explored in Bridgerton thus far. Aside from the declining mental health of her husband, she was not well educated despite growing up the daughter of a Duke. That lack of education was part of her appeal to the English court, as they assumed a woman with little interest in power would be a political nonentity. They were mostly right.

Everything to remember going into ‘Bridgerton’ Season 2

One area in which Charlotte did have influence is the mandate of courtly dress. She was strongly adherent to the tradition of hoop skirts in court, demanding that even her Regency-era ladies should wear them regardless of what was actually hip on the streets of London. Her rules lasted through most of her reign and chafed against common style so often that she was considered an actively unfashionable monarch.

Bridgerton‘s Queen Charlotte isn’t as hard on her visitors (at least when it comes to fashion), but her uniquely old-school dresses and huge wigs are a shout-out to the historical Queen’s refusal to move along with the times. Thankfully, her hoop skirts and lacy sleeves offer the costume designers the opportunity to design elaborate gowns for an entirely different era, and the Bridgerton audience the opportunity to gawk at whatever massive dress Queen Charlotte decides to turn up in next.

Bridgerton Season 2 is streaming on Netflix.