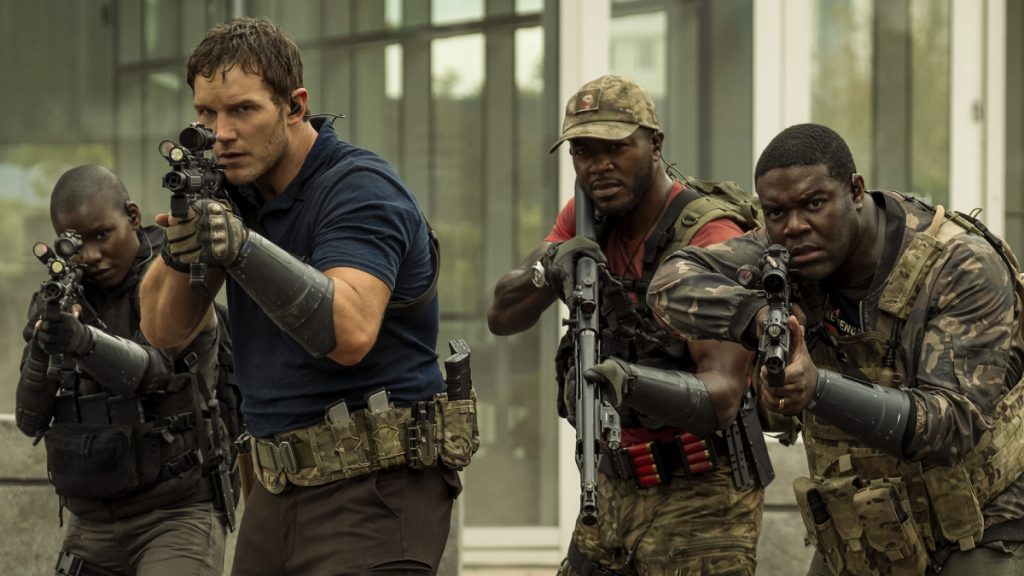 ‘The Tomorrow War’ fails to find a future worth fighting for

The premise of The Tomorrow War is that in the year 2022, time travelers come from the year 2051 to tell us of a war against invading aliens — one so catastrophic, humankind is on the verge of extinction. But that’s not the implausible part. Nor is it the desperate travelers’ plea, that the people of 2022 jump to 2051 to help replenish dwindling human forces.

No, what had me recreating the white guy blinking GIF was what comes next: The people of 2022 just agree to it immediately. Via a montage, we’re told that this message from the future was not just believed (they don’t have conspiracy theories or critical thinking a year from now?), but taken so seriously that all the governments of the world banded together to send their military forces into the future. Then, when too many of those soldiers died, this world government instituted a global draft to enlist civilians to send into the future.

By the time Dan Forester (Chris Pratt) — former U.S. soldier, current high school science teacher, and this film’s protagonist — is drafted, this has been going on for a year. Protests have only just begun around the world, led by folks tired of seeing only 30 percent of the conscripted come back alive, typically with life-altering injuries or intense PTSD.

It’s odd that people in this universe haven’t started pushing back sooner, considering what we see of the intake process. Dan is plucked from his everyday life with just a few hours’ notice, forced to undergo a painful procedure with no explanation, and told unceremoniously the exact time and date of his death in the future.

Dan’s conscription is such devastating news that his wife (a frustratingly underused Betty Gilpin) proposes they run away, consequences be damned. Dan himself entertains the idea of turning to his estranged father (J.K. Simmons, actually outdoing Pratt in the muscles department) for help. But there’s no good way out, so off Dan goes to report for duty in the moderately distant future.

In patches, The Tomorrow War can be serviceable. Zach Dean’s script grasps at poignancy in its exploration of parents, children, and the futures we fight for, and occasionally it even reaches it. There’s a bittersweet scene early on, where Dan’s teenage students bemoan the pointlessness of studying at all when they know they’re mostly going to be wiped out in a few decades. Later we see that dilemma played out in the character of Dan’s commanding officer (Yvonne Strahovski), who was just a kid when it all began.

Strahovski almost entirely shoulders the emotional weight of the movie. With a twitch of her lip, you see simultaneously the vulnerable girl who was robbed of a future, and the determined woman who’ll do anything to preserve what’s left of it.

There’s also some funny stuff involving Sam Richardson as Charlie, an affable but woefully underprepared scientist who’s drafted alongside Dan. Lines like “I’m just glad Will Smith wasn’t alive to see this” — in response to another, much tougher character growling “Welcome to Miami” at the sight of the destroyed city in 2051 — aren’t that incredible, but Richardson’s guileless, off-the-cuff delivery made me giggle out loud. Whenever he’s around, which is not nearly often enough, The Tomorrow War levels up into a surprisingly entertaining action-comedy.

Alas, The Tomorrow War is still mostly a movie that revolves around Dan doing heroic things like running from explosions and leaping from falling buildings and shooting aliens. (The aliens look just like the monsters from Cloverfield, and Stranger Things, and A Quiet Place and Underwater and oh my god can we please start designing some different monsters already.) The action calls to mind earlier films like Starship Troopers and Edge of Tomorrow and War of the Worlds, with no distinctive flair of its own.

And Pratt, who’s carved out a comfy niche playing wise-asses and goofballs in blockbuster movies, seems bland in the more intellectual and reserved character of Dan. It’s a disappointing reunion for Pratt and director Chris McKay, who last worked together on the bouncing ray of sunshine that was The Lego Movie.

That The Tomorrow War is trying to deliver more than just lizard-brain thrills only makes it more frustrating.

That The Tomorrow War is trying to deliver more than just lizard-brain thrills only makes it more frustrating. On one level, there’s something sweet about this wildly optimistic presumption that humankind would unite and rally in the face of dire warnings about future catastrophe. On the other hand: Really? It’s hard to look at the way we as a species have dealt with, say, COVID-19 or climate change, and not think we’ve proven ourselves to be godawful at reacting in the present to impending issues for the future.

It’s not that sci-fi action movies need to seem realistic. But The Tomorrow War‘s view of human nature feels so jarringly out of touch, it’s easy to get stuck in disbelief and hard to take anything else that happens all that seriously.

Underlying this rah-rah go-team attitude is an unexplored assumption that while humankind might be worth saving, individual human lives come cheap. The conscripted soldiers from 2022 are nothing more than cannon fodder. They’re deployed into battle with a few days’ training if they’re lucky, or a couple hours’ if they’re not, and armed with little more than machine guns they barely know how to use.

It’s no wonder the vast majority die during their weeklong deployments. But rather than question whether this is really and truly the best use of precious resources, present and future leaders can only think to throw more bodies at the problem.

That part, at least, fits with what we know of the real world: Powerful people ignoring the devastating consequences their decisions might have on the powerless. But the film itself doesn’t seem to notice this injustice, or consider any other way the people of Earth might go about this crisis. Or wonder how anyone other than Dan and his family — whose every tearjerking memory, painful decision, and cathartic heart-to-heart is excavated for emotional impact, while every other character gets a few lines of backstory at most — might be affected by it.

For a film so eagerly invested in the future, The Tomorrow War doesn’t seem to care all that much about the present.

The Tomorrow War is streaming on Amazon Prime.