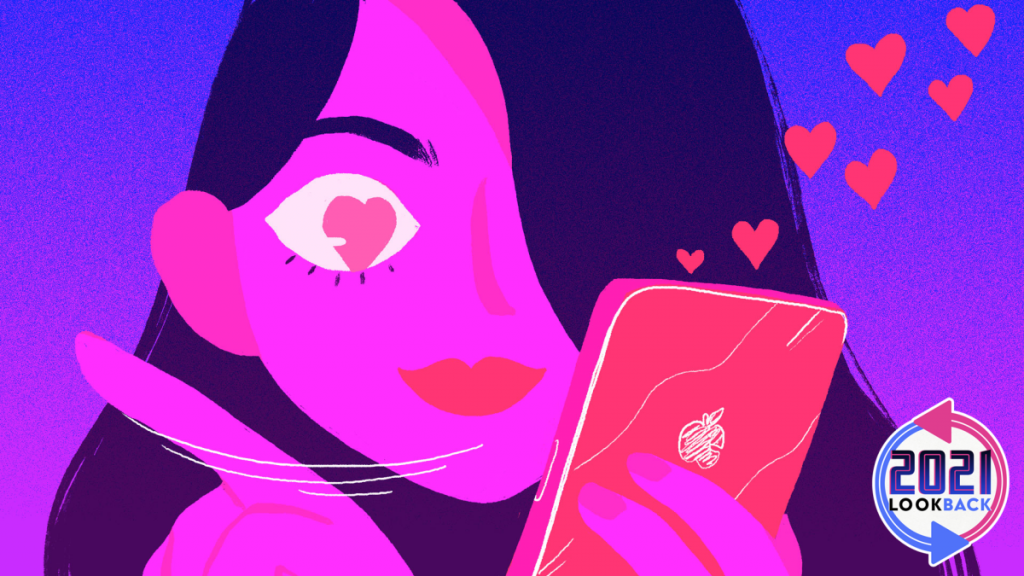 We’re halfway through 2021, a year that somehow has had more twists than 2020. While the world is still not out of the pandemic, many Americans are now fully vaccinated and out on the prowl.

2020 was rough when it came to looking for love, but we managed to find some actually good things in terms of dating. A lot has changed for the positive in the year since — not in spite of COVID, but because of it.

Multiple dating apps have reported that singles are more intentional in their usage going into a post-COVID mingling. Match’s 2020 Singles in America survey, for example, states that just over half of respondents (53 percent) shifted to more intentional dating.

Dating unsurprisingly slowed down last year as their only options (barring risking getting sick) were chatting over text or video, making the churn of message-to-meetup halt. This left us room to not only reflect on our dating patterns, but to also think about what we want out of dating moving forward.

People weren’t just talking about being more mindful when dating, either. They put it into practice with new behaviors. Most Match users (63 percent) now spend more time getting to know potential partners; are more honest with them (69 percent); focus less on physical attraction (61 percent of Gen Z, 49 percent of millennials); and consider a wider range of people as potential partners (59 percent).

Hinge, the dating app that’s “designed to be deleted,” is also seeing this trend manifest. Almost half of users (45 percent) said the pandemic spurred healthier dating habits such as no longer ghosting, which is down 27 percent on the app.

Singles are more honest coming out of the pandemic, too

Given the year and a half everyone had, daters are over games. In the Before Times, we may have gone out with someone we’re not really into just to have something to do on a Wednesday night, or ghost someone to avoid the discomfort of rejecting them.

But now? We don’t have time for that. For many of us, quarantine jarred us into the reality that we only have so much time in our one wild and precious life — why should we spend it not being true to ourselves?

In their Future of Dating report, Tinder predicted that daters will be more honest and authentic in 2021. Mentions of anxiety and “normalizing” grew exponentially on the app, hinting that people want to share who they really are — and what they go through — from the jump.

This means skipping the small talk, too. As Match’s Chief Scientific Advisor and biological anthropologist Dr. Helen Fisher said in the Singles in America press release last year, “Recent cataclysmic events have led singles to want more from dating: a desire for a relationship over casual dating; more meaningful conversations, and more honesty and transparency during a date.”

Related Video: We asked over 1,000 people about their post-COVID dating plans

We can date in-person again

This one is pretty self explanatory, right?

Never would I ever imagine being so grateful to meet a stranger at a dive bar. Thanks to COVID vaccinations, the United States has opened up again in time for dates in parks, patios, rooftops — and, yes, indoors if we choose.

Overpriced cocktails and sticky floors? Shut up and take my money!

But still date virtually if we want

Sometimes, however, you don’t feel like blowing cash on a fancy drink, even if there’s a tiny umbrella in it.

Quarantine brought the inundation of virtual dates, and a solid number of daters will bring them into post-pandemic life. Over half (52 percent) of Hinge daters say they’d probably continue video dating after they’re able to meet up safely, and 40 percent of Tinder users feel the same.

It makes sense: Video dating allows you to vibe check a match without having you leave your house. You can do a simple screening without spending the time and money a standard first date requires.

There are more options — possibly more than ever

Dating app usage spiked last year, meaning there are more users with which you can potentially match. That, coupled with the return of meeting people in person, means that we may actually have a wider dating pool than pre-pandemic.

According to a May 2021 survey from Tinder, more than half (54 percent) of respondents wanted to keep their options open this summer, with 20 percent looking forward to casually dating.

Flirting online and flirting in-person is now possible for the first time since the beginning of 2020, and that’s something to celebrate.

We’re anxious, but we’re not alone

FODA, or fear of dating again, is real. There’s also that pesky emotion of overall re-entry anxiety. We just endured — and are still in the midst of — a global crisis. It makes total sense if you’re nervous about exchanging particles with fellow humans again.

Seeing as the pandemic shrank social circles and made it impossible to socialize without screens, it’s also reasonable that doing so again is anxiety-inducing. You’re certainly not alone: In Mashable’s pandemic dating survey, respondents were the same amount of excited and nervous (around 39 percent). The fact that the term FODA even exists exemplifies that it’s not just a “you problem,” either.

While the knowledge that other people are hesitant to get back out there doesn’t do anything to absolve it, we at least have common ground.

Feel free to explore your desires

Sexcapades fell by the wayside over the pandemic, obviously, and many people had to play with just themselves and their sex toys. That’s thankfully changing now that more and more Americans are vaccinated, which means dormant desires can now come to the surface.

We’re already seeing it happen: More singles and couples want threesomes this summer, with mentions of them skyrocketing on sexual exploration app Feeld.

So go forth — with consent and protection, of course — and perform the acts you only dreamt about this time last year.

It may be easier to find a relationship

In that same Tinder survey from May, 52 percent of respondents said the pandemic caused them to get serious about dating much more quickly than usual.

This tracks with what some other dating apps are saying: 84 percent of OkCupid daters are looking for a steady partner now, with 27 percent having changed their minds about it due to last year’s experiences. Meanwhile, over half of Match daters (54 percent) are prioritizing their search for a relationship more now than pre-pandemic, according to Singles in America.

Further, Mashable’s post-pandemic dating survey found that people from ages 18 to 44 wanted a serious relationship over a casual one. If you plan on meeting someone special this summer, it may happen sooner than you think.

But you don’t have to have it all figured out

Don’t want a relationship? Not sure what you want? That’s cool, too.

According to Tinder, 48 percent of the recent survey respondents broke up with or stopped seeing their partner, significant other, or hookup since January — and that includes 53 percent of Gen Z. Mentions of the phrases “see where things go” and “open to” were used more than ever in 2020 according to Tinder’s Future of Dating, implying that some daters want to be more fluid in their approach moving forward.

Some people also came out during the pandemic and will be venturing into queer dating for the first time. Many people learned more about themselves and what they wanted through self-reflection and isolation the pandemic offered, and we’re all figuring out how to be that new version of ourselves in public.

And let’s be real: We’ve all been through a lot. We can and should give ourselves grace and do the same for the people we meet on apps (unless they’re being disrespectful — there’s no excuse for that).

As 2020 taught us, none of us can predict what’ll happen in the future. Hopefully, however, the rest of 2021 is full of in-person meet-ups, new relationships whether they’re serious or casual, and FODA slowly melting away.