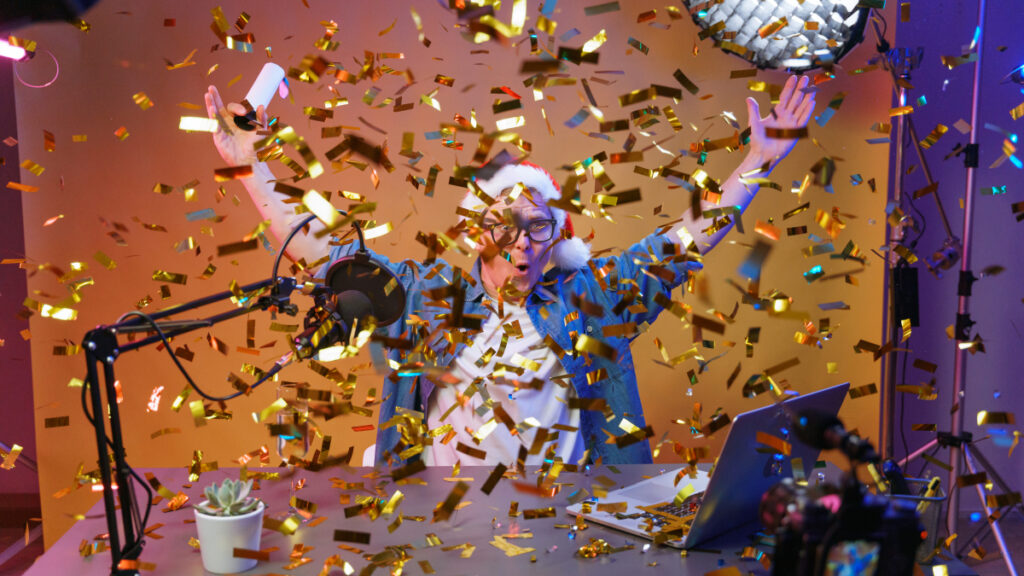 The ultimate guide to the best livestreaming gear of the year

Livestreaming has blown up over the past couple of years. YouTube, Twitch, Facebook, Instagram, TikTok, and even LinkedIn are all providing streamers with broadcasting platforms. Along with the livestreaming boom comes an abundance of livestreaming products.

But, which livestreaming gear is worth your hard-earned cash? As a livestreamer for over a decade now (remember Ustream and Justin.TV? I do!) I’m quite familiar with what’s good and what’s not.

So I decided to put together a breakdown of the best livestream products of the year so you can know what a veteran like me has come to trust. It’s worth noting that if you’re just looking for the best beginner gear to get your feet wet with, you can check out this starter guide. And since this list is gear-only, those who need software or app recommendations can check out this guide to apps, and this article about software best practices.

Often on these lists, you’ll find condenser microphones like the Blue Yeti, the Audio-Technica AT2020, or the Elgato Wave:3 at the top of the heap.

But better yet, skip the condenser mics and go with a dynamic mic, specifically the Shure MV7.

Looking for a quick plug-and-play option via USB? The Shure MV7 has you covered. Need an XLR microphone for when you get more professional and use a mixer? The Shure MV7 has an XLR input too. Worried about the size of your space and a possible echo? I can tell you from experience that a dynamic microphone like the Shure MV7 will eliminate the audio issues you’ll find with a condenser mic.

At $225, the Shure MV7 is certainly more pricey than those aforementioned condenser mics. But consider this: You’re future-proofing your setup. This will probably be the only mic you’ll ever need.

In the radio and professional podcasting world, the $400 Shure SM7B microphone has cemented itself as the gold standard for its audio quality. You’ll barely notice a difference between that mic and my recommendation, the Shure MV7.

Again, there are some popular choices that get recommended again and again. If you just need a low-cost, good quality webcam, the Logitech c922 is a very popular choice that will do the job.

However, if you’re looking to go beyond just a basic webcam and stream high-quality video content, you should invest in a DSLR or Mirrorless camera. That’s right, those cameras that professional photographers and indie filmmakers use are perfect for livestreamers looking for close to professional quality at prosumer price points.

There are a lot of options out there from Canon, Sony, and Panasonic, just to name a few, that can range from the mid-hundreds to thousands of dollars. I personally use the Panasonic Lumix G7 ($599). 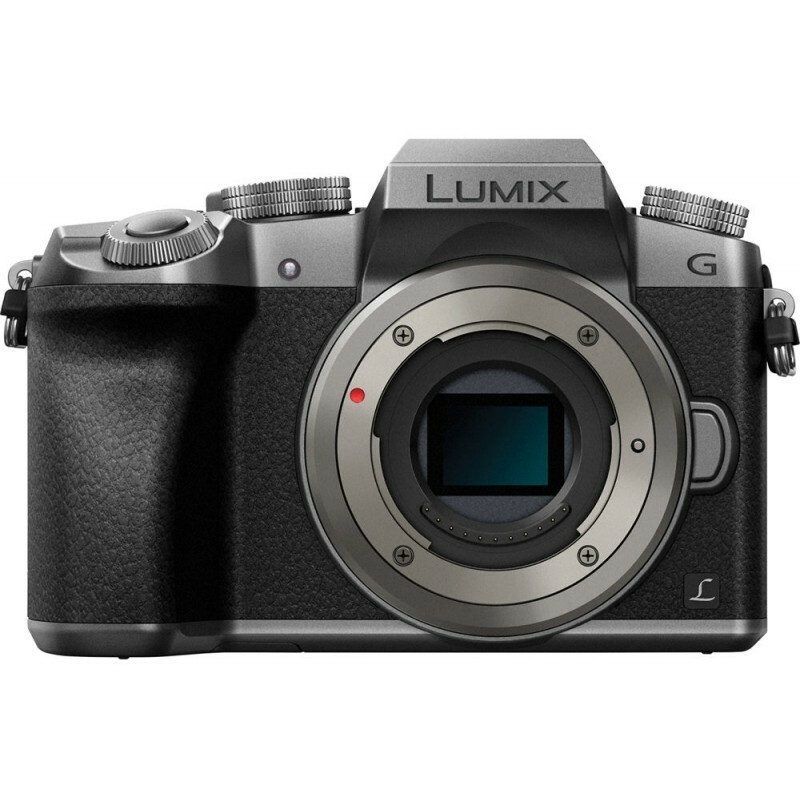 Before deciding on a DSLR or mirrorless camera, there are a few things you need to check for. For one, make sure the camera provides a clean HDMI output, meaning that the video you see on your computer screen removes all the viewfinder layouts, options, statuses, and icons.

It’s also important to make sure that the camera doesn’t have a built-in timer that shuts off the camera after prolonged idling. You won’t generally be recording when you’re livestreaming, and some DSLR and mirrorless camera models are programmed to automatically shut down after a while if you use them in this way.

You’ll also likely need at least two additional pieces of hardware: the Elgato Cam Link ($130), to connect your camera to your computer, and a camera power adaptor, which will allow you to constantly power your camera from an outlet instead of a chargeable battery.

It sounds more complicated than just a plug-and-play USB webcam, but the upgrade in video quality makes it worthwhile.

I’m not looking to get into a PC vs. Mac debate! If you’re looking to primarily livestream video games, you know what to go for. You need a gaming PC.

However, gamers aside, I have to recommend the latest Apple Mac Mini for everyone else. I’ve gone into detail about why before, even going so far as calling the Mac Mini M1 “made for livestreamers.” 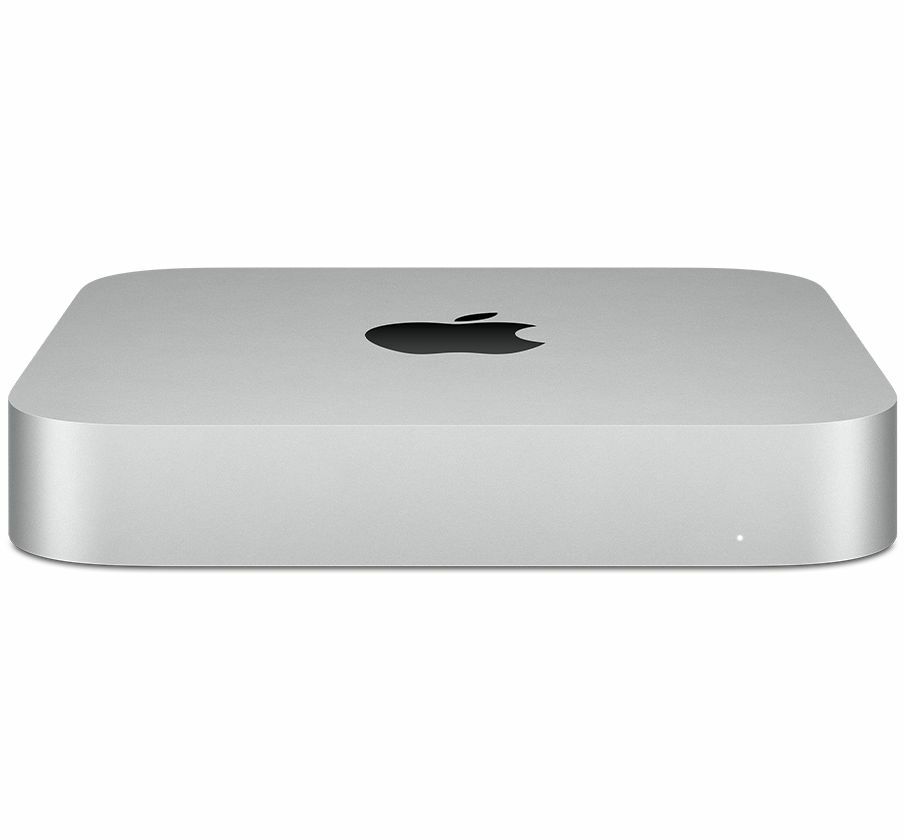 For the past year, I’ve used a Mac Mini M1 and it’s a powerhouse. I highly recommend buying the 16GB model (starting at $899) so you’re set for years to come. There’s no need to worry about the size of the internal SSD because you can easily add on super fast external SSDs like the Sandisk Extreme (starting at $75) and lower your costs.

Forget the ring light, Elgato’s Key Lights give you the lighting setup you need. 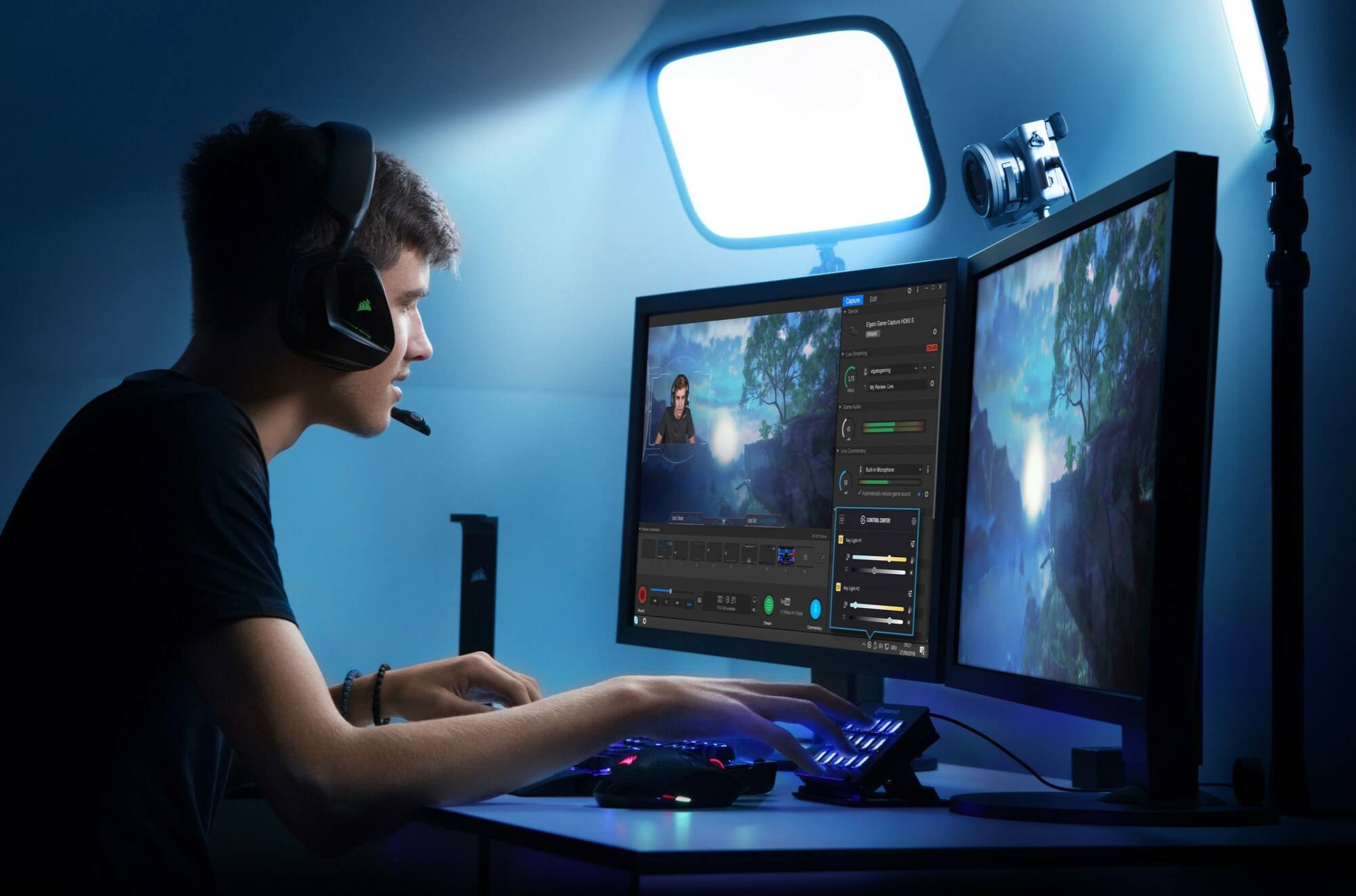 These high-powered 2800 lumens studio LED lights are perfect for livestream setups in even the smallest of spaces. Plus each light comes with a stand that’s honestly more stable than most standalone desk tripods. The light has a flat design which means it can work with desks that are even flush up against a wall without problem. Also, these lights don’t give off any heat. Plus there’s a mobile app that allows you to not only turn the lights on and off, but also gives you full control over the light’s brightness and color temperature.

The one issue is that they are kind of pricey ($199 each) and I would highly recommend buying two of them to deal with shadows, especially if you’re using a green screen.

The Rodecaster Pro is known in the podcast world as pretty much a near-perfect all-in-one audio recording solution. You don’t even need a computer to produce your podcast with the Rodecaster Pro if you’re just looking to record audio. 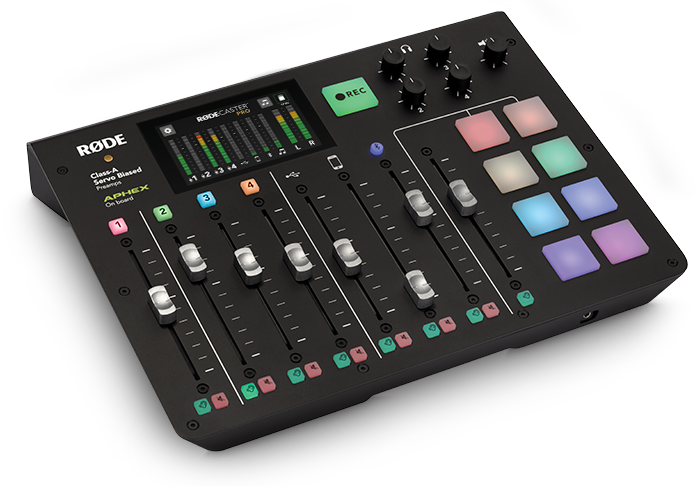 But, why would you want it for livestreaming?

If you’re ready to take your livestream to the next level, you’re going to want to use a mixer so you can have full control over every aspect of your mic audio, and also balance it with any external sound inputs.

In fact, you’re going to need a mixer if you have an in-studio co-host or in-person guests. (There are workarounds to use multiple USB mics on one computer but I wouldn’t recommend them.)

Most high quality, professional sounding microphones require XLR inputs, which is where the Rodecaster Pro comes in. You connect your mic to the mixer and then the mixer to your computer.

At $599, the Rodecaster Pro isn’t cheap. But, if you bought my microphone of choice, the Shure MV7, you already have one XLR microphone, so at least there’s no need to spend money ensuring compatibility.

Automated background removal where your arm disappears every few minutes may be fine for a quick Zoom meeting for work, but you don’t want that happening throughout an hours-long livestream.

You may also want to superimpose video of yourself over the video game you’re playing or the clip you’re watching on your stream. A green screen will help you do that too.

However, most cloth green screens take time to set up. If you’re streaming regularly, that can be a pain. That’s why the Elgato Green Screen ($130) is so convenient. 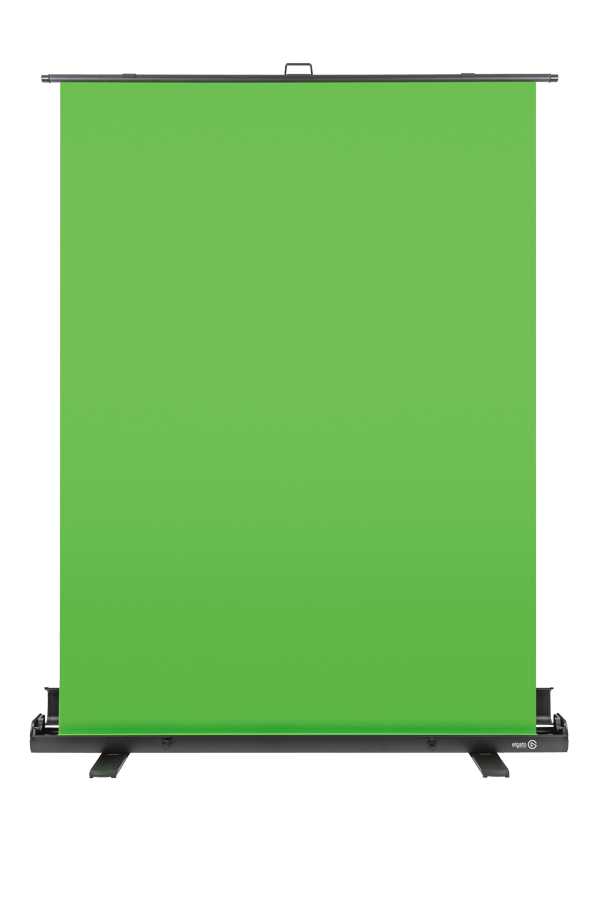 Simply flip open the lid, pull the retractable green screen up, and you’re ready to stream. When you’re done, just push the green screen back down into the case and close the lid. The green screen is fairly wide, so you do need a bit of floor space for the length of the case. But, it’s by far the easiest way to set up and tear down a green screen.

If you don’t have the floor space, there are also retractable green screens you can hang behind you on your wall. Elgato makes one, the Elgato Green Screen MT ($160) but you can also save money going with Neewer’s version of the same thing ($99).

But thanks to its portability, the floor model gets my recommendation.

I highly recommend livestreaming with two monitors. Producing a stream on a single screen can get quite annoying when you have to keep track of a lot of open windows and you’re running low on screen space.

Any good monitor will do when you’re at your desk. However, sometimes you may find yourself livestreaming on your laptop or Macbook and in need of a second screen. But, you’re not going to lug a full sized monitor around with you. 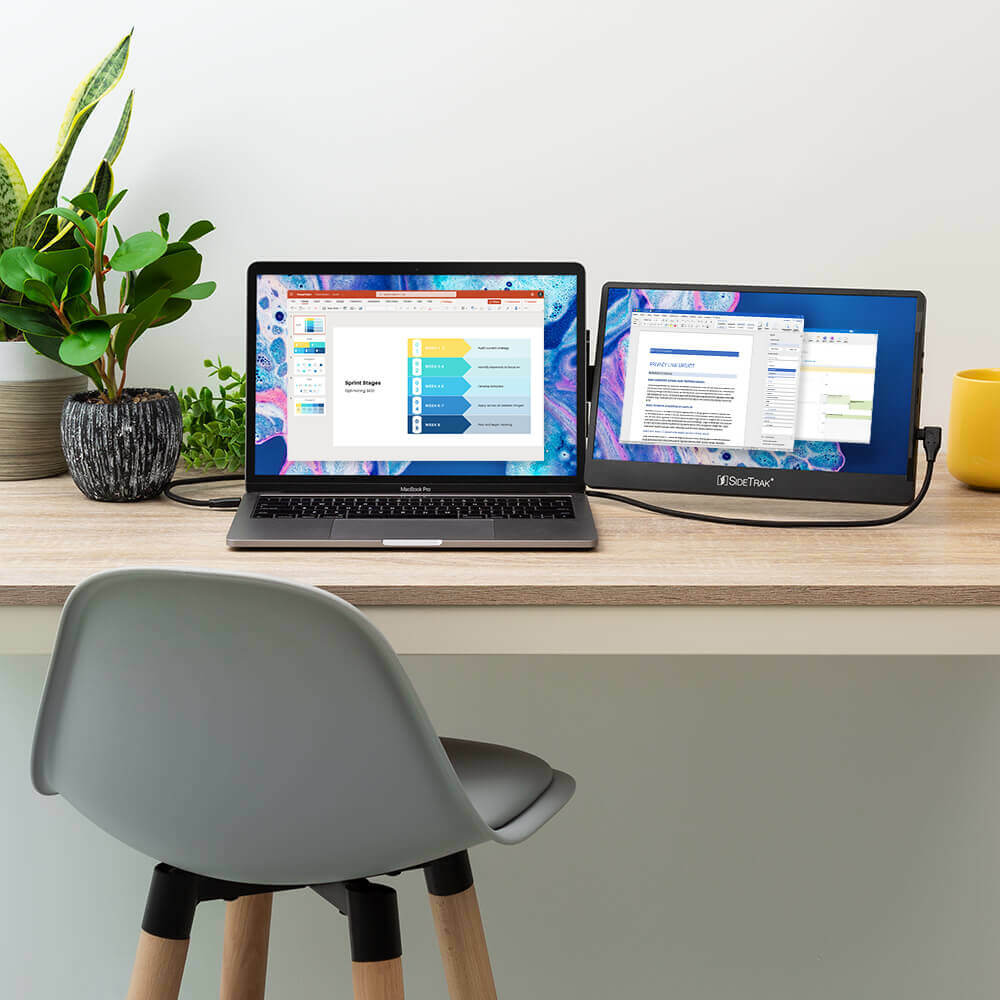 Sidetrak makes a series of portable second-screens for laptops, including the Swivel, which actually connects to the back of your laptop. When you open your computer, you simply pull the Sidetrak screen out and it hangs right off the side of your laptop, giving you extra screen space. These portable monitors are a bit expensive, starting at $299, but if you’re a laptop user in need of a second screen, they are very handy.

It can be a challenge to both host and produce a livestream at the same time.

Instead of having to click through a slew of menu options or remember different keystroke combinations, imagine being able to press a button and change your livestream scene? Or cue up music or sound clips? Or a myriad of other things, all with just the push of a single button? 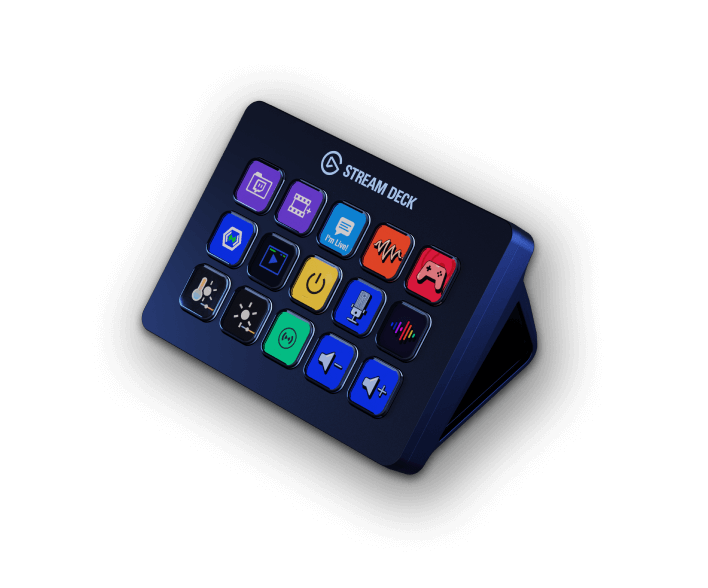 That’s what the Elgato Stream Deck line of products and the Loupedeck Live are for. Both stream decks provide a number of physical buttons which can be programmed to carry out a task with one press.

Now, which one to choose? Elgato’s Stream Deck comes in three size options: the Mini with 6 buttons, the Stream Deck with 15 buttons, and the XL with 32 button model. From my own use, I think the 15 button model at $149.99 is good for most streamers. 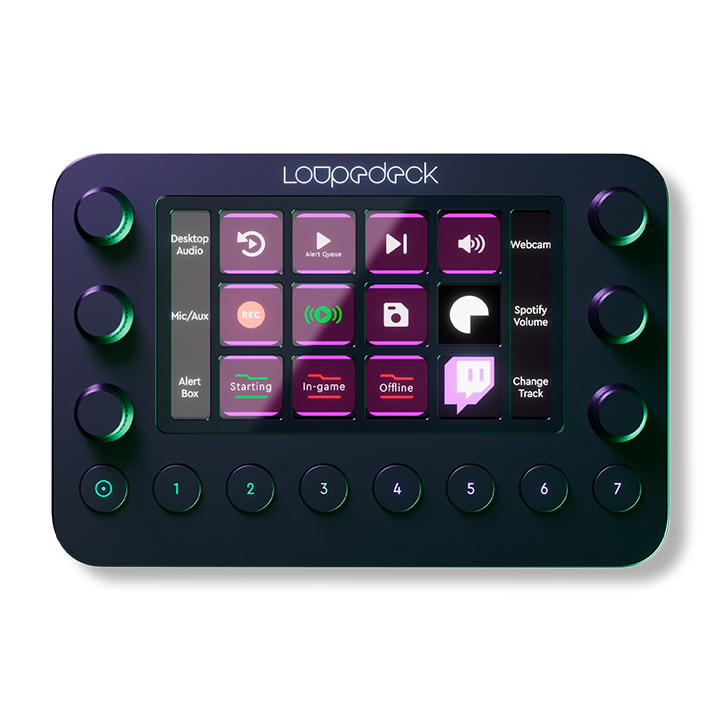 But you might also want to consider upgrading to a similar product with some impressive abilities beyond livestreaming. At $269.99, the Loupedeck Live is more expensive, but that’s because it’s also more than a livestream tool. The Loupedeck Live is also an audio/video editing console. The device doesn’t just come with programmable buttons, but also rotary dials, which make it perfect for adjusting sound levels and scrubbing through your timeline while editing footage. If you make a lot of shorter clips out of your long livestreams, the Loupedeck Live may come in handy.

Does your WiFi suck lately? These boosters can help.

Having used both, I will say they are both great devices that have many overlapping functionalities while also serving different purposes. Elgato does have the upper-hand with a number of third-party plugins created by their robust user community. But if you’re creating content outside of just live video, the Loupedeck Live will be useful there too.