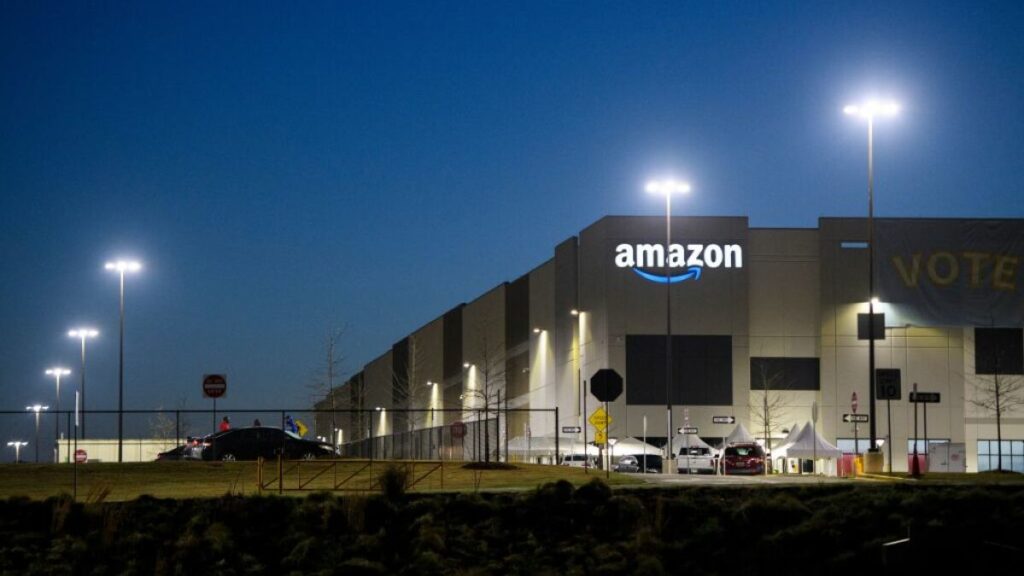 ‘There’s no moment of silence’: What happened after 2 Amazon employees reportedly died within hours of each other

Two Amazon workers from its Bessemer, Alabama facility died last month, one of them suffering a stroke not long after his request to go home was denied, said two of their co-workers. Speaking to workers’ rights organisation More Perfect Union, they claim that work continued as normal despite the deaths.

The Amazon workers reportedly died within hours of each other on Nov. 28 and 29, one at the facility and one after being transported away from work in an ambulance. In a video interview being widely shared on Twitter, Amazon day-shift worker Isaiah Thomas claimed that the man who suffered a stroke had been on the night shift in his department, and “had died on the job.”

“He had gone to HR and said, ‘I’m not feeling so well, can I please go home?'” said Thomas, explaining that many Amazon warehouse workers don’t have enough unpaid time off, and have a fear of being dismissed if they take time off beyond their allotted days. “And this dude, he didn’t have enough [unpaid time off] to go home… And so, they’re effectively telling him, you either go home and lose your job, or you just stay here and keep working through the pain. And that’s what he did.”

Amazon disputes what the workers shared in the video. “These claims are false and it’s really disappointing that anyone would spread misinformation about something like this to try and advance their own agenda,” said Kelly Nantel, an Amazon spokesperson. In its video, More Perfect Union noted Amazon did not respond to its request for comment.

Workers at Amazon’s Bessemer warehouse attempted to unionise in April under the Retail, Wholesale and Department Store Union (RWDSU), but the effort was defeated with 1798 votes against to 738 for. The RWDSU told Mashable that it worked with More Perfect Union to release the report, but declined to comment further, citing a desire for focus to remain on the workers’ stories.

The National Labor Relations Board found that Amazon illegally interfered with the union vote by intimidating workers, and ordered a revote on Nov. 29 — the same day one of the Bessemer warehouse workers allegedly died.

Amazon worker Perry Connelly told More Perfect Union that the worker who had a stroke was reportedly inside a trailer when he died. His body allegedly wasn’t found for approximately 20 minutes, when someone realised he hadn’t been seen for a while.

Neither Connelly, nor Thomas witnessed the actual deaths, however they were present for the aftermath. According to both, managers at Amazon instructed workers to continue working despite the deaths.

“They actually come around and tell people not to talk about it, and go back to work,” said Connelly, who has spoken before about his desire for unionization. “There’s no shutdown, there’s no moment of silence, there’s no time to sit and have a prayer. A couple of people that worked directly with him or knew him good was badly shaken up. A couple of them wanted to go home and were not allowed to go home….

“You’re a body. Once that body’s used up, they’ll just bring somebody else in and do the work.”

Amazon warehouse workers in Alabama get to re-vote on unionizing

Earlier this month, Amazon came under fire after six workers died in an Illinois warehouse collapse during a tornado. Amazon has also been repeatedly criticized for the high rate and harsh severity of injuries in its warehouses, boasting a rate of serious injuries almost 80 percent higher than at other warehouses.

“Amazon’s long history of putting their profits above their workers is exactly why their employees in Bessemer organized and tried to form a union,” said More Perfect Union’s executive director Faiz Shakir. “We’re seeing Amazon workers rise up around the country to fight against their abusive labor practices and we’re here to tell their stories despite Amazon’s desperate attempts to cover them up.”