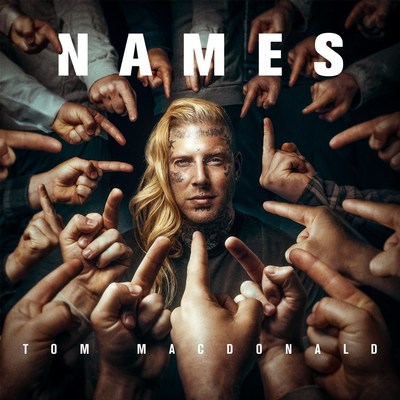 On the track, synths puncture a sparse bass-loaded beat as Tom rips bars laced with pure honesty. It culminates with what might be the truest statement of all, “You can call me what you want, because at the end of the day, they’re just names.“ Once more, his partner and creative cohort Nova Rockafeller helmed the inflammatory video. This clip finds Tom crucified on a billboard emblazoned with insults as he does the one thing no one else will do—speaks without fear…

He commented, “‘Names’ is a statement piece. It’s about all of the names that we call each other every day. The names you see plastered all over the internet and on social media. The names you hear on the news and see on the protest signs. The devastating names that people carelessly label each other with all the time. Stupid, racist, ugly, transphobic, loser, sexist, idiot…we’ve given these words so much power – so much power that a negative label can change a person’s life and affect them forever – often undeservingly. This song is about remembering these words for exactly what they are…they aren’t YOU…they’re noises that angry humans make. They’re just names.“

Despite being royally screwed by the mainstream “counting” apparatus, Tom still captured #1 on the Billboard Top Album Sales Chart with The Brave—his collaborative album with Adam Calhoun. Their tally recognized 16,000 units, but it was actually 48,000 (that’s a conversation reserved for a YouTube video and another YouTube video though). Not to mention, Billboard and Rolling Stone have given him ink.

By the numbers, he has officially surpassed 893 million YouTube views with just under 3 million subscribers. In 2021 alone, he moved over 200,000 physical albums, generated 100 million YouTube views, and racked up 200,000,000 million Spotify streams. “Fake Woke” captured multiple Billboard #1 spots and brought him mainstream on Fox News. Not to mention, Us Against The World exceeded physical sales of 70,000 copies.