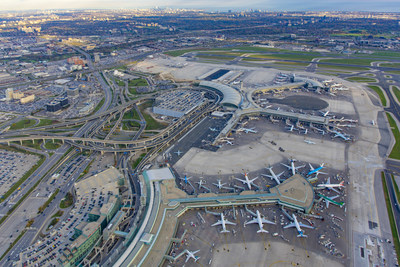 Airport is working towards net zero emissions by 2050

ACA is the only global, airport-specific carbon standard which relies on internationally recognized methodologies. It independently assesses and recognizes the efforts of airports to manage and reduce their carbon emissions through six levels of certification: Mapping, Reduction, Optimization, Neutrality, Transformation and Transition.

The GTAA has long been a leader in environmental sustainability, proactively putting in place a program to reduce greenhouse gas (GHG) emissions in 2009. That strategy resulted in significant GHG reductions by 2020, earning it an Environmental Award in the Environmental Management System category from ACI.

In 2021, the GTAA released an Environmental Policy that includes a commitment to achieve net zero Scope 1 & 2 emissions (GHGs from assets owned and operated by the GTAA) by 2050. To do this, the airport is incorporating environmental considerations into all airport operations and capital projects.

“This designation from ACA reinforces that we’re on the right path towards reducing GHG emissions,” says Pat Neville, Vice-President, Airport Development and Technical Services, GTAA. “We’re very proud of the hard work our teams are doing to find innovative ways to cut down on carbon emissions, but we know there is more that can be done. We’ll continue to find ways to decrease emissions and will work towards achieving the next designation from ACA.”

About the Greater Toronto Airports Authority

The Greater Toronto Airports Authority is the operator of Toronto – Lester B. Pearson International Airport, Canada’s largest airport and a vital connector of people, businesses and goods. Toronto Pearson has been named “Best Large Airport in North America serving more than 40 million passengers” for five years in a row by Airports Council International (ACI), the global trade representative of the world’s airports. In recognition of its Healthy Airport program, ACI has also awarded Toronto Pearson the “Best hygiene measures in North America” award for two years running, and Toronto Pearson was the first Canadian airport to receive ACI’s global health accreditation for its response to COVID-19.