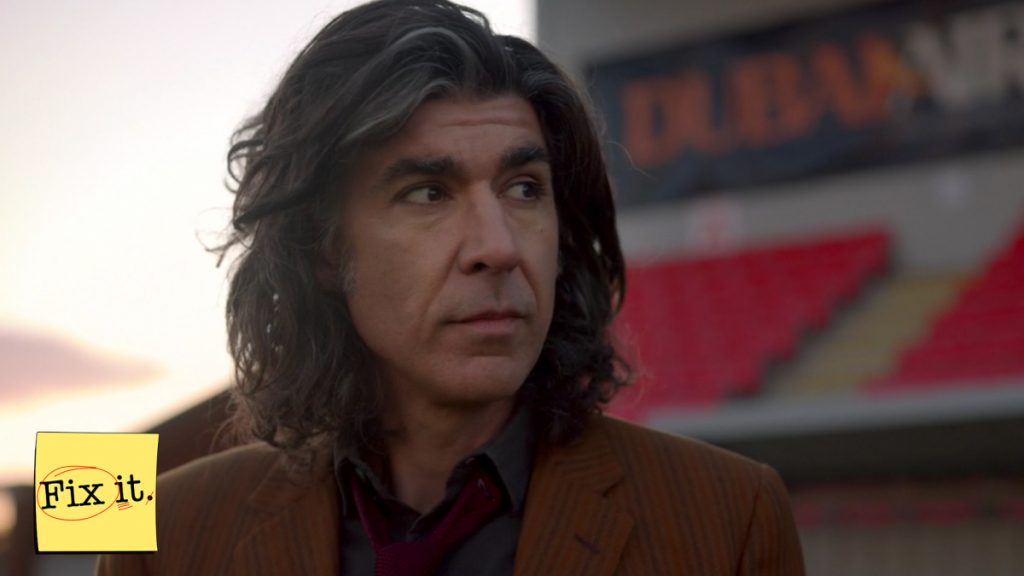 Trent Crimm of ‘Ted Lasso’ did a major journalism don’t

Welcome to Fix It, our series examining projects we love — save for one tiny change we wish we could make.

Between crafting relatable portrayals of anxiety, highlighting the importance of kindness to suicide loss survivors, and (mostly) appreciating British culture sans stereotypes, Ted Lasso gets a lot of things right.

But the Apple TV+ comedy got one thing wrong in the 11th episode of Season 2, “Midnight Train to Royston”: JOURNALISM!

Fans of Ted Lasso know, and in all likelihood love, the show’s most prominent journalist, Trent Crimm, The Independent (James Lance). He and his luxuriant head of hair are always ready with solid questions at Richmond’s press briefings, and though he makes no effort to hide his cynical side, he’s a fan of Coach Lasso (Jason Sudeikis).

Crimm is such a key member of the press that Rebecca arranged for him to spend a day with Ted and write an in-depth profile on him in Season 1. After spending the day together, Ted called Crimm a “darn good” writer — but be that as it may, the penultimate episode of Season 2 has us questioning whether or not Crimm is a darn good journalist as well.

In the sixth episode of Season 2, Ted walks off the field mid-game because of a panic attack. He tells everyone — including Crimm, who requested comment — that he had food poisoning. However, Ted later shares the truth with his fellow coaches.

In the final scene of “Midnight Train to Royston,” Trent Crimm texts Ted and reveals that an article exposing the panic attack is scheduled to run in the morning.

Trent Crimm: The Independent getting ready to blow it.
Credit: screenshot / apple tv+

Crimm includes a preview of the fully written piece, with a headline crediting an “anonymous source” for his scoop, and explains, “As a journalist, I had to write that.” Then, before requesting comment, Crimm royally besmirches his title as a journalist by texting, “But as someone who respects you… My source was Nate.”

I screamed “NO!” the second I saw the text, but only half of my shriek was in response to downtrodden junior coach Nate’s betrayal. The other half was in response to Trent Crimm committing a major journalism offense: He revealed his source.

As any good journalist knows, relationships with sources are sacred. Trust is a critical component in journalism, and it’s crucial that sources always feel safe when sharing information. Nate clearly gave comment for this piece under the promise of anonymity, so Crimm should have respected that by keeping Nate’s identity a secret — yes, even if Nate was being an insufferable little shit and Crimm wanted to do right by Ted. Sending the article preview was nice, but WHY couldn’t you have stopped there?
Credit: SCREENSHOT / APPLE TV+

Hollywood has a long history of unrealistically portraying journalists in film and television, but Ted Lasso’s writers made Crimm seem like a beacon of hope in the world of fictional journalists for nearly two full seasons, which is why it was so confusing and painful to see Crimm essentially say “to hell with ethics and anonymity.”

Ted Lasso’s kindness isn’t what you think it is

Do I totally understand why he would want to reveal his source to Ted? Of course. But with his profession he carries the responsibility not to, and I worry that people watching this scene who aren’t familiar with journalistic integrity will assume that it’s normal for journalists to out their anonymous sources via text whenever they feel like it.

Journalists have been fined and sent to jail for refusing to out their sources in the real world, and while an article about a football coach’s panic attack isn’t anywhere as serious as those cases, respecting source confidentiality remains a huge ethical issue in all reporting — one that Trent Crimm seems like he’d fully understand and never violate.

Revealing his anonymous source was bad, but we noticed a few other issues with Crimm’s journalism tactics:

It’s worth noting that we obviously have no idea what Crimm’s piece says, who else he reached out to, or if he’s reported on mental health in a sensitive manner, but there’s no doubt that journalists who admired Trent Crimm’s role in the series thus far found the scene a bit disheartening to watch.

Crimm coming right out and exposing Nate was likely a good move for the overall storyline time-wise, but Ted only told a few people about his panic attack, so I’m sure he could have figured out who leaked the information without writers having to ruin everyone’s favorite Ted Lasso journalist.

Crimm could have reached out to Ted professionally for comment and then reached out as a friend off the record to offer his support. But deciding to out his source was a real, and seemingly out-of-character, choice — one we’ll hopefully get clarity on in the Season 2 finale, which airs on Oct. 8.

If we’ve learned anything from this season of Ted Lasso, it’s that fans of the show get antsy when we can’t watch all the episodes at once.

We’ll have to watch the finale to find out.