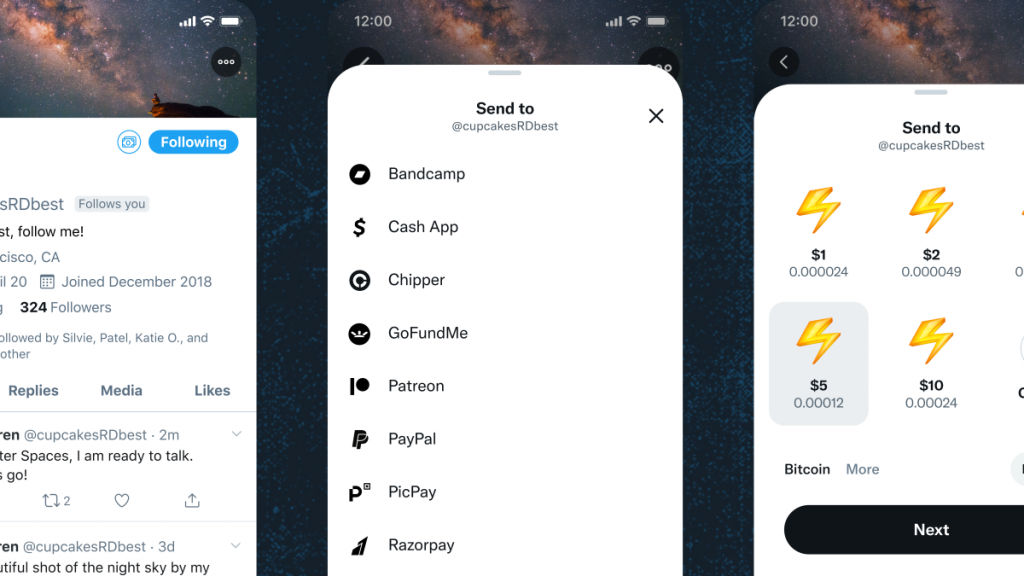 The social media giant announced Thursday that, starting immediately, users around the globe will be able to post their bitcoin wallet directly into their profile — while a more limited subset will be able to more directly integrate a bitcoin payment app. The addition of cryptocurrency payments to Twitter, via Tips (formerly dubbed Tip Jar), coincides with the larger rollout of Tips to all iOS users globally, with Android access promised in the near future.

“People will be able to add a bitcoin lightning wallet or their bitcoin address to send and receive bitcoin Tips beginning today,” explained Esther Crawford, Twitter’s product lead for creator monetization, on a Thursday press call.

According to a Twitter blog post, users in the U.S. (excluding residents of Hawaii and New York) and El Salvador will be able to use the third-party Strike app to send and receiving bitcoin over the lightning network. Users will also be able to add bitcoin addresses to their profile.

In other words, it doesn’t appear that Twitter is getting into the business of directly facilitating bitcoin transactions. Rather, Twitter is giving other services that do that work prominent real estate on its platform.

It’s worth noting that Square’s Cash App, which is a payment service founded by Twitter CEO Jack Dorsey, allows users to buy and sell bitcoin.

Crawford also spoke to Twitter’s interest in non-fungible tokens, and how they’re currently used on the platform. Many NFT owners use their NFTs as profile pics, and Twitter is looking into ways to formalize that practice.

“We’re excited to soon explore NFT authentication,” she explained. “It’s a way to support creators making this art with a stamp to demonstrate authenticity. By allowing people to directly connect their crypto wallets, they can track and showcase their NFT ownership on Twitter.”

What that means, exactly, is still unclear. Will verified NFT profile pics be designated as such, and, if so, how?

“We’re interested in basically just making it visually clear that this is an authenticated avatar and then give you some interesting info and insight about the provenance of that NFT,” elaborated Crawford.

In other words, Twitter knows NFTs and bitcoin aren’t going away any time soon, so decided to embrace what’s already organically happening on its platform.