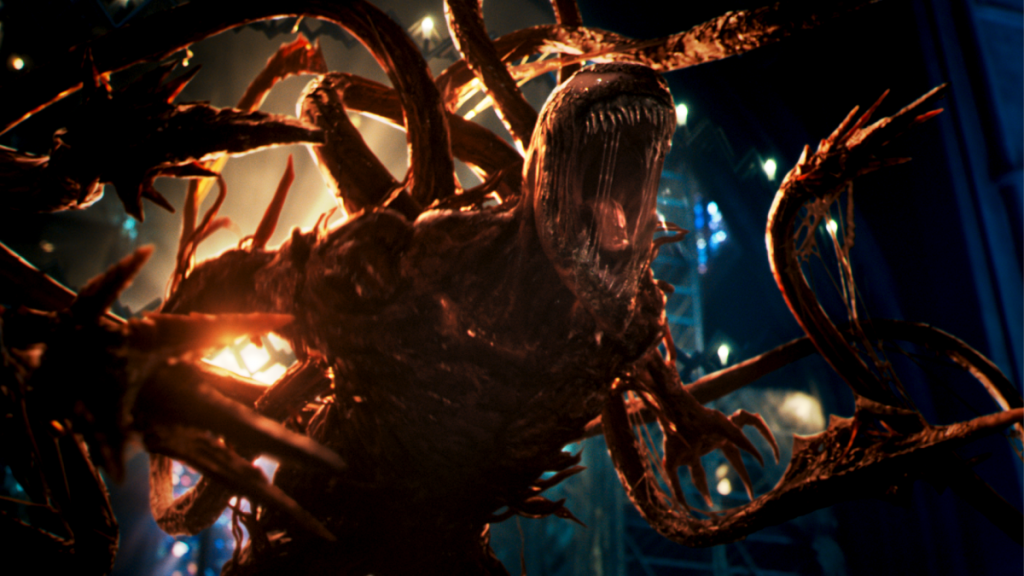 ‘Venom: Let There Be Carnage’ is the spectacularly stupid sequel fans craved

“Look at all these weirdos,” exclaims alien symbiote and certified sex symbol Venom, while walking into a party during Venom: Let There Be Carnage. “My kind of people!”

It’s a fitting thing to say in the moment — what with Venom’s hulking body camouflaged by a sea of partygoers in costumes that somehow let his slippery appendages and razor-sharp smile blend in. But, hearing the line in the context of a theater, it could just as well serve as a direct greeting to Venom’s many real, movie-going fans. Breaking the fourth wall, he might glance out across the silent auditoriums filled with Marvel misfits the world over, all eagerly waiting for him to say “dick” or whatever. “Look at all these weirdos,” he’d say, obviously correct in his observation.

Directed by Andy Serkis, Venom: Let There Be Carnage is the sort of film that comes with, let’s say, certain expectations. Like the snark-loving audiences who eagerly awaited a repeat performance from Ryan Reynolds in Deadpool 2, Let There Be Carnage ticket-holders should be anticipating a raucous, silly, not-for-everyone performance from lead Tom Hardy in this, his simultaneous sophomore stint as Eddie Brock and his parasitic partner Venom. (Suffice to say, if that doesn’t make sense to you, you’ll want to see 2018’s Venom before diving in here.)

This is a movie for people who like weird exactly the way Venom does weird, and if that’s not you, there’s just no way it’ll work. Yes, you’ll see the Mad Max: Fury Road star pull-off cool stunts and contend with goofy CGI graphics, like any hero does in a major action movie these days. But more importantly, you’ll watch Hardy attempt to once again stick the landing on a role that has him playing both parts in one of the most fantastically fucked up friendships ever put to film. The good news? He 100% kills it, even if the movie itself is just more of the (very good) same.

Making a sequel to a movie as unusual as the first Venom was always going to be tricky — something Hardy had to have known when taking it on. Of course, it’s not an issue of plot; Venom’s history in the Marvel comics offers plenty to work with, including the rival symbiote storyline we see Woody Harrelson lead here. Rather, the challenge lies in delivering something as ridiculous and entertaining as the original without devolving into self parody. Sure, you want to see Venom and Eddie squabble a bit; that’s what makes them lovable. But when does cute turn into cloying? And yes, you do wanna hear Venom say “dick”. Probably a lot. But how many dicks is too many dicks, y’know?

The solution conjured by Serkis, it seems, is to do whatever he feels fits the characters as fast as humanly possible — making it virtually impossible to keep any sort of cinematic scoreboard straight in your head. One second, Venom is raising pet chickens. The next he’s complaining about getting brain freeze from ice cream. And then oops, there goes some dude’s head. Before you know it, the 90-minute runtime is gone and you’re staring down the promise of post-credits scenes. That this frenetic approach works as well as it does is something of a miracle. While the story remains simple — you can probably guess 80% of Let There Be Carnage‘s plot line just by looking at the poster — Venom and Eddie fly through dirty jokes, biting insults, and high-stakes combat at a speed only seen in the first movie’s most climactic moments. Their characterizations are similarly complex, with each of half of Veddie revealing far more about themselves in this film than the first.

This goes on for nearly the entire movie, save the scenes dedicated to developing the generally mediocre characters of Harrelson’s Cletus Kasady and Kasady’s girlfriend Shriek, played by Naomie Harris. (It’s no fault of the actors that their story doesn’t really work. It’s just not what we’re here for.)

It’s a lot, both to watch and, presumably, to execute. To be sure, exhaustion is part of Eddie Brock‘s general demeanor. But it appears Hardy would be justified in saying this movie left him very, very tired. Scene to scene, he brings tremendous physicality and emotional presence to both of his roles with an appropriately unhinged intensity that rivals the performance of any major superhero performer on screen today, as well as his first go at Venom. Anne, I’m gonna need you to look less confused. We did this in the last movie.
Credit: sony pictures

The product of this inherently messy approach can be jarring, with Venom’s characteristically deep voice (and perhaps some shoddy speakers in the theater where this critic saw it) forcing you to lean in to catch the speediest dialogue. Many of the action sequences are similarly frantic, with the camera seemingly always on the verge of missing something important. Think falling down stairs while trying to watch a live car chase — but the driver of the car has two heads and they’re both talking shit. (In this metaphor, are we in the car or watching the chase? Who knows, and perhaps more importantly…who cares? That‘s Venom!)

Despite the chaos, Let There Be Carnage is supremely watchable. You’ll follow the main narrative with ease, find respite in the moments Michelle Williams’ Anne is forced to take control of her ex-boyfriend(s), and otherwise have an amazingly weird time. It’s breezy, yet bold; silly, yet compelling; a flurry of fuckery you won’t want to miss. If you liked the first Venom, you’ll enjoy his second outing just as much. After all, “we are Venom” and three years later, that’s still rad as hell.

Venom: Let There Be Carnage is in theaters Oct. 1.