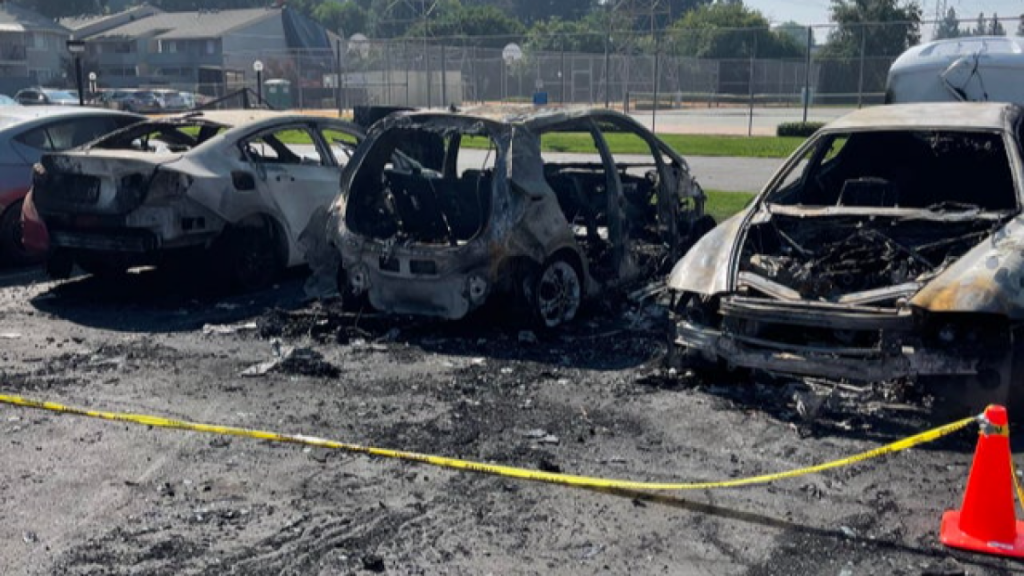 Early Monday morning, 20-year-old Jesus Damian’s 2017 Bolt EV burst into flames while sitting in a parking lot near his apartment in Sacramento, California. The all-electric vehicle was unplugged and off when the fire broke out. The fireball comes after Chevy expanded its recall of Bolts to include every model year earlier this month. The initial recall in November occurred after several reports of battery fires. GM blames battery-maker LG for manufacturing defects.

A neighbor who witnessed fire crews putting out the flames sent over a quick video to Damian. The video was taken at 2 a.m. Monday. He was asleep in an apartment far from the lot, but nearby residents told him they “heard a loud boom and then cracking sounds and the huge flame,” as he posted on Reddit. The cars parked around his Bolt, including a Maserati, a Chevy Cruze, and a Hyundai Elantra, were also damaged.

After posting photos of the destroyed car to Reddit, Damian wrote, “I more so [sic] made this post so people can understand and see that this is real and it is happening.”

The owner said he has since been in touch with Chevy and his car insurance company and plans to sue GM. Company spokesperson Dan Flores wrote in an email that Chevy is in contact with the car owner. Flores added, “We have begun an investigation to determine the potential cause of this fire.”

“At this point it is a waiting game with everyone,” Damian wrote in an email. He said he’s feeling a lot of frustration and anger.

The fire, which likely started from the battery beneath the floor, left the car unrecognizable. The Chevy Bolt had about 36,000 miles on it and included the more-expensive Premier package from the first year Chevy started making the Bolt.

The 2017 Chevy Bolt when it was brand new.
Credit: Jesus Damian 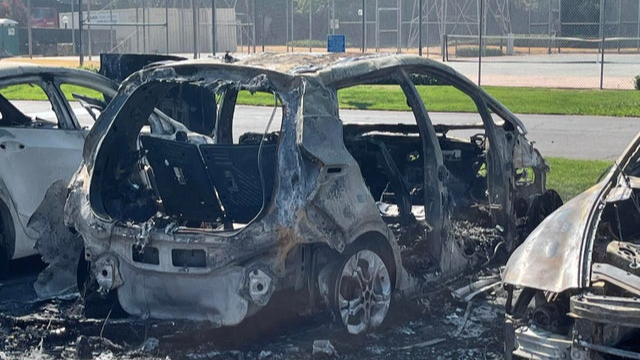 The Chevy Bolt after the battery fire.
Credit: Jesus Damian

When Chevy added its entire Bolt line, including the 2022 EUV, its first all-electric car that you can drive hands free, to its recall in August, General Motors said it could cost as much as $1.8 billion.

At the time, GM had offered to replace all the battery cells in recalled cars, but that effort has been paused as the company worries that its battery supplier, LG, can’t make “defect-free” products.

Prior to notifying customers that they’d get new battery cells with better range and an eight-year warranty, GM only offered a software fix in June. But then cars that got the software fix continued to catch fire.

The factory where Bolts are made is temporarily shut down until at least Sept. 6 as GM investigates the specific cause of the battery problem leading to the car fires.

Before the fiery scene in Sacramento, GM advised Bolt owners to charge their batters only to 90 percent and not let the charge fall below 70 miles of range. That limits drivers used to at least 238 miles of range to 144 miles, or about 60 percent of capacity. The burned-out Bolt from this new video clocked in at 34 miles of charge when it exploded.

The automaker also suggested parking outside after charging and avoiding indoor parking overnight. Damian posted on Reddit that he normally charges at a Level 2 ChargePoint plug at the mall where he works and only “fills” it to 85 percent about every five days. Level 2 charging is among the most common. It’s a step above plugging into a wall outlet and a step below so-called “fast-charging.”

Although the 2017 car was part of the original recall, Damian performed the software fix and continued using the vehicle since he didn’t have any indication that something was wrong before parking. On the morning of the fire, he wrote, “I woke up to my phone saying that my car needed attention from the myChevrolet app. I was walking to my car to go to work in the morning and found it like that.”

UPDATE: Sept. 1, 2021, 9:33 a.m. PDT This article has been updated to include comments from a General Motors spokesperson.