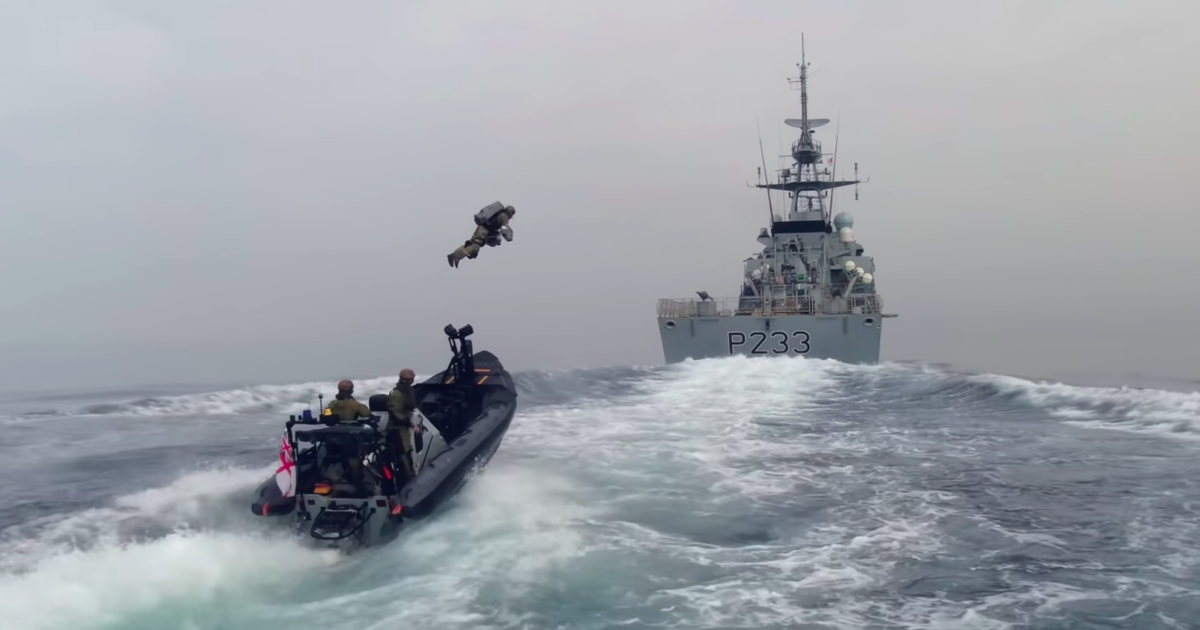 The future of military tactics just keeps getting more and more Tony Stark-like by the day.

Royal Marines have teamed up with British company Gravity Industries to successfully use a jetsuit to board an in-motion military ship off the south coast of the UK.

The jetsuit was flown multiple times in an exercise meant to test its capability to support maritime boarding operations. The tests were conducted over three days by the Gravity team, including founder and chief test pilot Richard Browning, along with 42 commando Royal Marines aboard HMS Tamar, an offshore patrol vessel of the Royal Navy.

In the video above, watch as the test pilot stands at the bow of the speeding rib boat, then lifts into the air using the suit, flies untethered toward the military ship, and easily touches down on the deck — here’s a handy video about how the suits actually work. The pilot then simply and quickly unlocks from the hand devices before throwing a ladder over the side for a waiting marine, who climbs up the side from the rib boat.

Maritime boarding operations, according to Gravity Industries, typically involve a fast rib boat moving closer and closer to a high-sided ship, and accessing it through a caving ladder thrown up and over the side. It’s a slow and shaky process, with the only alternative means of boarding involving the use of a helicopter. The use of the jetsuit would boost the speed of these operations, and enable access to any part of the ship, even letting pilots adjust where they have landed by simply taking off again — in a very Iron Man move.

The team conducted many training exercises before the test, and the video footage is the stuff of dreams (for anyone who dreams of flying around in the middle of the ocean with a few mates):

Gravity Industries have been testing the marine boarding ability for months, most recently completing a trial with the Netherlands Maritime Special Operations Force.

The company has also previously collaborated with the UK’s Great North Air Ambulance Service to test deploying airborne paramedics in search and rescue missions, enabling them to reach people in difficult terrain as quickly as 90 seconds — much faster and more specifically than a helicopter could.

Each Gravity jetsuit costs roughly $430,000 (£340,000), so it would be a significant chunk of military budget if the Royal Marines decide to incorporate these into their tactics.