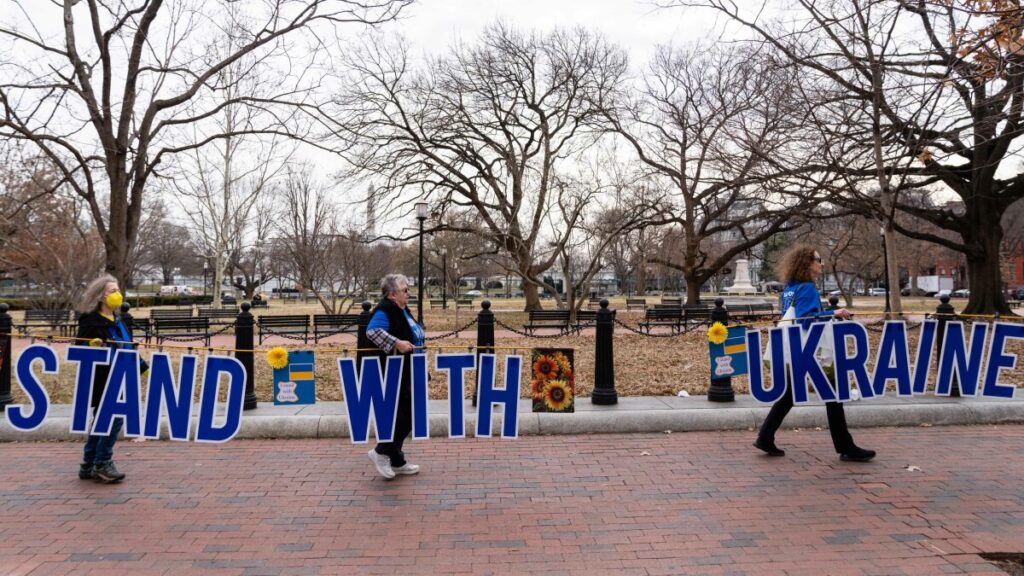 Watching footage from Ukraine? Here’s how to protect your mental health.

Without warning, there it was in my Twitter feed: video of a Russian missile exploding a Ukrainian administrative building in Kharkiv. Minutes earlier, I’d seen footage of Ukrainians rushing to flee the country’s capital via train. The reporter’s caption was more haunting than the imagery: “A mother was just briefly separated from her child on the platform and her scream was something I’m not sure I can find words to describe.”

This is what an invasion looks like when it unfolds on social media. It can be overwhelming. Research also tells us that media exposure to these scenes can lead to anxiety, acute stress, and post-traumatic stress symptoms — all reasons to consider watching fewer of them while finding other ways to stay informed about the conflict.

Otherwise, visceral dispatches from the frontlines arrive instantaneously, delivering chaos and violence, regardless of whether we’re prepared to cope with what we witness. Algorithms take cues from who we’ve followed and what content we’ve lingered on. Something incomprehensible unravels before us in disorienting fashion. Satellite imagery depicts a Russian convoy headed to Kyiv that stretches 40 miles. An expert casts the conflict as World War III. Another predicts the “heinous” things Russian president Vladimir Putin will do to prevail. Ukrainian President Volodymyr Zelenskyy, a former comedian and actor, grimly stares at a camera and declares: “Nobody is going to break us.”

“Nobody is going to break us.”

Bystanders watching all of this feel the pull of contradictory impulses. Drawn in by the urgency of an armed conflict over democracy, we want to know and see more, to perhaps help in whatever way possible. The constant flow of information is magnetizing. Yet as we wonder about the lives torn asunder by missile attacks or imagine the howl of the mother who’s lost her child, the sobbing or numbness becomes unbearable.

Alone with a device in our hands, or sitting in front of a screen, we might chide ourselves for what feels like self-indulgent anguish while Ukrainians flee or fight for their lives. Yet this is no imaginary or insignificant burden. Research on media exposure to violence and conflict indicates that being an observer comes at a real psychological cost, particularly the longer we watch, and when we have our own history of trauma.

Why small doses of media matter

When I ask Dr. E. Alison Holman, a researcher at the University of California at Irvine who studies the physical and mental health effects of exposure to collective trauma, about what to make of being an observer of the Russian invasion, she immediately recommends curtailing news consumption.

“My advice to anybody around this stuff is to titrate your doses of media,” says Holman, who is a professor of nursing and psychological science at U.C. Irvine. “Figure out a good source of information that isn’t full of lies and misinformation and get small doses to capture what it is that you need to understand about what is going on in the world, and then stop — don’t continue.” (Mashable’s Christianna Silva compiled a list of reputable sources.)

Holman’s conviction is based on studies she’s co-authored that found a link between media exposure and worse physical and mental health. In 2019, she published a study detailing how greater exposure to graphic, bloody images from the Boston Marathon bombing in 2013 was associated with higher acute stress, post-traumatic stress symptoms, fear of future terrorism, and as a result, difficulty working or participating in social activities.

Holman’s research suggests that past exposure to violence is associated with increased media engagement after a major traumatic event, as well as more post-traumatic stress symptoms and worry about the future. In turn, this appears to trigger a cycle in which the person is at greater risk for consuming media coverage of subsequent violent events and experiencing higher acute stress following those incidents.

How to help refugees fleeing Ukraine

Getting out of this loop means turning off the news or stepping away from social media. “I’m not saying become a hermit,” says Holman. “Just don’t overexpose yourself.”

Dr. Roxane Cohen Silver, a frequent collaborator of Holman’s and distinguished professor of psychological science, medicine, and public health at U.C. Irvine, says it’s very difficult to extricate oneself from the pattern of information-seeking that becomes common during times of crisis. On social media, posts point to new content, commentators, and often novel perspectives, including commentary and images from people on the frontlines. We click and scroll not knowing what we’ll find next. Still, since the invasion began, Silver has not viewed graphic footage or photos once even as she reads about the conflict, a conscious choice that stems from decades of her research findings.

Caring for ourselves and others

Drawing and holding this boundary isn’t just for self-preservation. Holman notes that when we maintain the ability to care for ourselves, we can be compassionate toward others. Importantly, strengthening bonds with loved ones and other people can increase our capacity for empathy and action, as well as improve our mental and physical health, says Holman. Though few outsiders will or can join Ukrainians as they battle Russian troops with Molotov cocktails, we may still animate a spirit of collective resistance when we remain capable of bearing witness and committed to the cause of fighting for democracy.

This is no easy feat given the unique dread that this conflict elicits. The real threat of nuclear escalation is one we’re contemplating in the midst of a years-long global pandemic, within days of receiving a dire warning about our dwindling chances to prevent the worst effects of climate change. What’s happening now in Ukraine is rupturing whatever fragile sense we had of living in an orderly world. “These are compounding, escalating stressors,” says Silver.

At times like these, when it’s too soon to make meaning of a tragedy that’s still underway, Silver says that we can attempt to regain control in other productive ways. As I wrote last year, practicing radical acceptance can be a first step toward coping with crisis, and one that offers important clarity about our values. Then, actions like donating to humanitarian organizations or signing petitions can reorient us away from despair and toward living with purpose and intention. Finding these levers is critical, says Silver, “even if you can’t stop the 40 miles of convoy.”

Silver notes that we’re less than a week into Russia’s invasion of Ukraine. We can imagine what’s to come but don’t know how it will end with any certainty, a type of limbo that human beings find unforgiving. As we endure the ambiguity, with the knowledge that fellow human beings are suffering, we can also hear and hold close the refrain Ukrainian President Volodymyr Zelenskyy has offered his people: “Nobody is going to break us.”

If you want to talk to someone or are experiencing suicidal thoughts, Crisis Text Line provides free, confidential support 24/7. Text CRISIS to 741741 to be connected to a crisis counselor. Contact the NAMI HelpLine at 1-800-950-NAMI, Monday through Friday from 10:00 a.m. – 10:00 p.m. ET, or email [email protected] You can also call the National Suicide Prevention Lifeline at 1-800-273-8255. Here is a list of international resources.

Related Video: How to recognize and avoid fake news