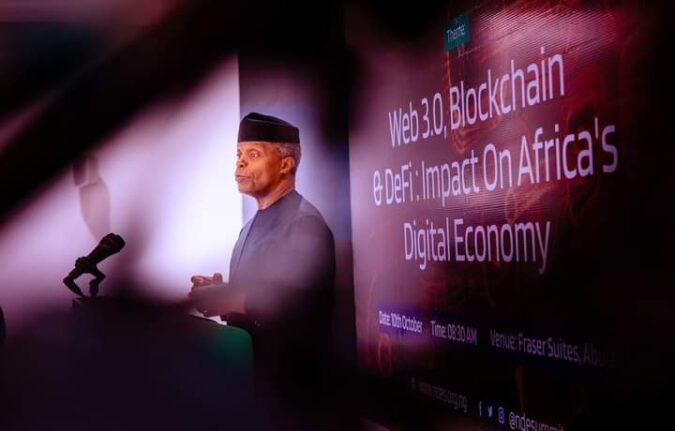 In a speech where he lucidly details the significant advancements already recorded in Web applications, Vice President Yemi Osinbajo, SAN, has submitted that Nigeria as a country has the requisite talents, creativity and acumen to become a world leader in the digital economy.

He stated this on Monday at this year’s Nigeria Digital Economy Summit (NDES) with the theme “Web 3.0, Blockchain & DeFi: Impact on Africa’s Digital Economy.”

He observed that with the right approach and policy, as well as the country’s human capital and potential, “we can actually become world leaders in digital technology in all its various ramifications.”

Delving into the different levels of progress recorded since the advent of the use of the Web on a large and global scale since Web 1 in 1989, Prof. Osinbajo who was the Special Guest of Honour and Keynote Speaker at the event, highlighted the future of technology, digital economy and what it means globally but especially for Nigeria.

“A whole new world is unfolding before our very eyes, unlike Web 1 and 2 where we were relatively disadvantaged,” he said.

He continued, “in 1989 we didn’t have mobile phones so we could not take advantage of the reach and depth that mobile telecoms gave digital innovation and financial inclusion. We are now better positioned to be significant players in Web 3.

The VP further noted that “we have already shown that we have the talent, creativity and acumen to build and grow major tech companies. At the last count, we have 6 unicorns and many more on the way. But we must spend time on the development of digital skills.”

Urging for more synergy between Government (public) and the private sector in driving the digital economy revolution in the country, the Vice President added that both sectors must find ways to ensure “policy is way ahead for development.”

According to him, “we must think through and develop appropriate policies and regulations that promote, rather than inhibit, innovation and commerce. We can be world leaders in the Web 3 revolution. The only limit is our vision,” he said.

Using examples such as the technology-driven Growth platform by the Bank of Industry, and the implementation of the Government Enterprise Empowerment Programme (GEEP), one of the schemes under the Federal Government’s Social Investment Programmes (SIPs), the Vice President observed that the technology platform deployed in the implementation of the microcredit schemes such as TraderMoni and MarketMoni was built by Eyowo, a local Nigerian tech company.

Then the Vice President spoke about digitisation in the public sector.

“Web 3 will also mean that the digitisation of government’s services will come with more options, government agencies can then be smarter, faster and more efficient in delivering their services.

“But I think most importantly, digitising government processes and services is a sleeping commercial giant. The whole range of government services will provide several opportunities for innovation,” Prof. Osinbajo observed.

Prof. Osinbajo also noted the category of licences created and made available to some FinTech companies by the Central Bank of Nigeria (CBN) in the past few years as a significant example of how government policy can drive innovation and economic growth.

This category of banking licences accessible to fintech companies are at a  far cheaper rate when compared to the cost of actual traditional banking licenses by the CBN, the VP disclosed.

He also emphasized that there must be an adequate regulatory framework to ensure ripple effects across the digital economy value chain.

“From a policy perspective here in Nigeria, we may need to again expand the range of banking licenses available to enable more players in the financial mediation value chain.

“We must also set clear rules to enable crypto markets and trading in other digital assets.  Identity in the Web 3 age is a key development. It means the user owns his or her own identity and personal data,” he said.

Highlighting the Web 3 revolution, Prof. Osinbajo added that “we are in the early days of Web 3.0. Its defining components, as we can already see, are blockchain technology, smart contracts, DEFIs (Decentralized Financing), tokens, both fungible and non-fungible tokens (NFTs); and the whole range of token economics; unlike Web 2.0 where data is mostly centrally stored. Web3.0 data will be interconnected in a decentralised way and will also be machine-readable.”

Continuing, he said: “decentralised protocols as you know are at the heart of blockchain, cryptocurrency technology and the whole range of DeFis. So, these systems will be effectively integrated and interoperable and automated through smart contracts.

“That data will be machine readable is very significant, which is why Web3 is sometimes described as the Semantic web. This means that users and machines using AI and Machine Learning will be able to creatively interact with data.

“Now these developments mean a whole lot. First is the increasing sovereignty of the user, the user will have more control over personal data. DeFi will mean cheaper and faster financial transactions, as the middle institutions will be retired. So, this means more room for FinTechs, and not just for banking services but insurance and consumer finance.

“Even central banks will have to rethink their roles since blockchain will challenge the centralization of monetary authority with its clear imperfections. Who knows, we might actually be in the last days of the central banking system as we know it.”

The Vice President then commended the organisers and their partners, noting that the annual summit was a testimony to the joint commitment of the government and the private sector to the rapid and value-driven development of Nigeria.

“The outcomes of past summits have contributed positively to an improved-policy environment and better governance in the areas of innovation and investment over the years. Amongst other things, the NDES has over the years, helped to foster better understanding between the public and private sector on the realities and opportunities in Nigeria’s present day,” he said.

Aside from the VP, the event also featured remarks from the Convener of the Summit and founder/CEO of the Foresight Group, Mr. Lanre Osinbona; a representative of Bank of Industry (BOI), Mr Seun Tubi, as well as Silicon Valley investor, Director, Plug & Play, Abu Dhabi & Middle East, Babak Ahmadzadeh.

In his remarks, Osibona, who was previously Senior Special Assistant for Information and Communications Technology in the Buhari Administration noted that collaboration was key to implementing successful digital transformation strategies.

“The key to achieving real change lies in actualising the true potential of our youth and preparing them to think and act for a future better than their past. They can learn from previous mistakes and build a better world for themselves and their children. Let us all work together towards using technology to build a sustainable Nigeria for future generations to come,” he stated.