What every gardener should know about daffodils, society garlic and ginger lilies 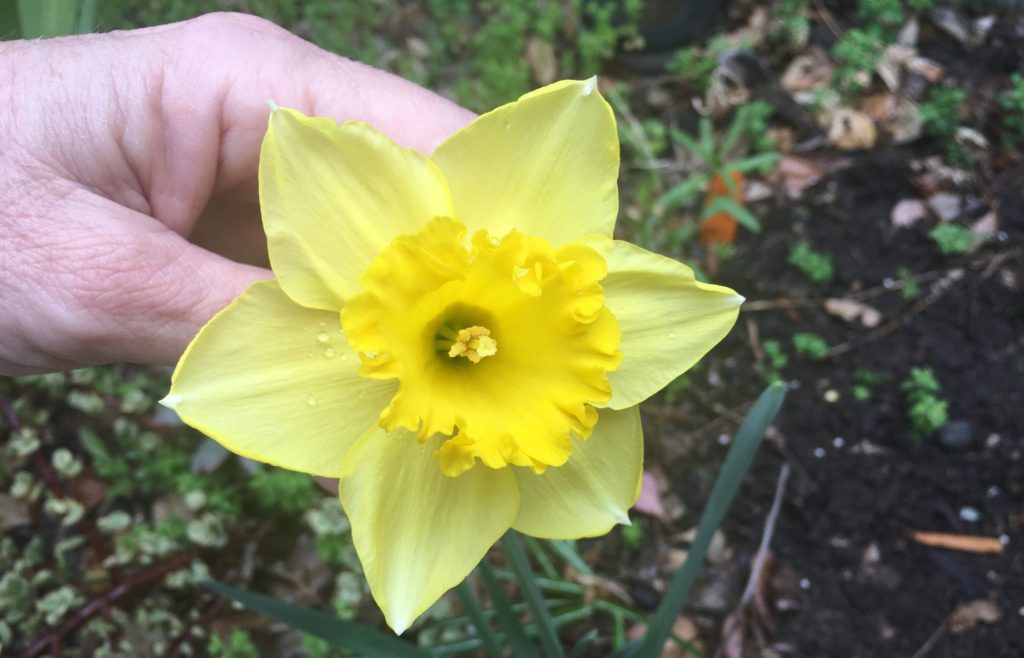 The famous trumpeting, cupped receptacle on daffodils is called a corona, and botanists are confounded as to its function. However, the presence of the corona does assist us in explaining why daffodil flowers nod as opposed to staying upright. Were the cupped corona to face the sky, rainwater would collect in it, causing the pollen on the anthers inside of it to rot, preventing pollination and seed formation from taking place.

It is worth noting that daffodil species that bloom in the fall have coronas that stay upright, the reason being that these species are native to the Mediterranean basin where rain arrives later, after their flowers have faded, in the winter. Moreover, through hybridization and selecting for corona orientation, there are now spring daffodils with upright flowers as well.

There are two explanations for the daffodil’s scientific name, which is Narcissus. One is that the nodding daffodil evokes Narcissus from ancient Greek mythology, the handsome youth who gazed with bent head into a pool of water and fell in love with his image. He became so infatuated with himself – the most extreme form of unrequited love – that he fell into despair, would neither eat nor drink and withered away. His dead body was transformed into the flowers that bear his name.

The other explanation for the name Narcissus comes from its etymological root, narke, a Greek word meaning numbness or intoxication. There does seem to be a connection between the two names since a narcissist is effectively numb to others. The fragrance of some Narcissus flowers – paperwhites are most notable in this regard — is also said to be intoxicating. Place a vase of paperwhites in the center of a room and the scent will find its way into every corner.

All parts of Narcissus species are poisonous, especially the bulbs, due to the presence of alkaloids. So keep small children and pets at a distance from your hill of daffodils. And do not combine the daffodils you put in a vase with other flowers since cut daffodil or Narcissus stems exude lycorine, a toxic alkaloid that will be taken up the stems of other species, causing their flowers to wilt.

Daffodils and paperwhites are among the easiest bulbs to grow since they spread in sun or dappled shade, are pest-free, and naturalize or spread throughout the garden with no effort on your part. And yes, you can still plant them now. K. van Bourgondien, a popular source for bulbs located in Ohio, ships pre-chilled daffodil bulbs until May 1st. You can access them at dutchbulbs.com or by calling 855-489-2538. Upon request, they will even mail you a free catalog with photos of a large variety of bulbs and other perennials in vivid color. Browsing through the catalog is a great way to bolster your confidence in plant identification.

And then, of course, there are summer and fall flowering bulbs and rhizomes as well. In Los Angeles, the most earnest flowering bulb plant is society garlic (Tulbaghia violacea), which may be planted from containers at any time of the year, blooms profusely and constantly, and is highly popular as a bulletproof ground cover. Two types are commonly planted, both with violet blooms. The standard type has shiny, slender green leaves and the variegated version has green-and-white striped foliage.

The downside of maintaining this plant is removal of the spent flowers which, unless they are painstakingly snipped off, remain attached for months in the form of floppy brown strands. There is an efficient way around this problem, however. When the quantity of faded flowers has given a stale look to the normally fresh-looking society garlic, simply shear the plant to the ground. It will be grateful for the brief rest you have given it before it regroups, releafs, and starts flowering again. There is, of course, the matter of the pungent garlicky odor you assume when working with society garlic, an ironic name considering its anti-social olfactory aspect.

And if you are in search of a non-garlicky society garlic, select sweet garlic (Tulbaghia fragrans) instead. Be aware that sweet garlic is less vigorous than society garlic and is more useful as one among many selections for an English garden, as opposed to being used by itself as a mass ground cover planting.

The ginger lily is a rhizomatous plant whose relative obscurity is matched only by its beauty and reliability in the garden. As is so often the case with plants, ginger lily is a misleading name; this species is not a lily and, although a member of the ginger family, has no vaunted culinary attributes.

Like other rhizomatous plants such as bearded iris and agapanthus, the ginger lily is famous for its cut flowers. The showiest ginger lily is kahili ginger (Hedychium garderanum), from the Himalayas, which has large yellow flower spikes with red stamens and an outstandingly sweet fragrance. The gold and green-leafed variety of shell ginger (Alpinia zerumbet) is as impressive as a variegated plant can be.

Ginger lilies are excellent companions to the banana-leaved and rhizomatous canna, requiring the same conditions for growth. I realize this may not be of much help, since the canna is somewhat finicky. Actually, it grows easily enough; the problem is that its leaves burn when exposed to full sun, yet it refuses to flower in the shade.

Sunset Western Garden Book recommends “light shade” for the ginger lily, a microclimate found directly under a tall tree whose branches allow a reasonable dose of sun to get through. But ginger lilies – and cannas too, for that matter – may also do well in two other microclimates. One is that found in the no man’s land between neighboring houses or buildings, and the other is up against an east- or west-facing wall. In both of these situations, the full sun that the plant receives does not dry out the soil around its roots, especially when the roots are covered in two to three inches of mulch. Between buildings, the sun cannot find an angle to reach the soil; when a plant is situated against a wall, its root hairs will cling to the always-moist soil next to the foundation. So yes, canna and ginger lilies do benefit from moist soil but that does not mean excessive watering is needed if the proper microclimate is found and a thick layer of mulch is in place.

The curvaceous bronze or rainbow-striped leaves of certain Canna cultivars, complemented by hot orange flowers, command attention. Or if green leaves are your preference, you can choose Cannas in flaming red or yellow or impetuous pink. The flowers of irises, which they resemble, are the only garden blooms that can compete with Cannas for sheer opulence.

Toward the front of such a planting, you might choose the smaller black calla (Calla palaestinum), quite similar to the more familiar white calla except for its dark purple spathe and spadix.

Finally, Italian arum ‘Pictum’ (Arum italicum) is a year-round eyecatcher thanks to its arrowhead, white-veined foliage and large clusters of orange fruit.

Tip of the Week: Amole (Beschorneria yuccoides) is a plant native to Mexico that no garden should be without. The flowers are unique in the plant kingdom and resemble those seen on Audrey, the carnivorous plant in the movie “Little Shop of Horrors,” although this species is rather benign. In fact, although related to yuccas and agaves, its foliage is soft and smooth. And although it produces pups like agaves do, it does not die in the manner of agaves after flowering but persists for years. In the language of the Aztecs, amole meant detergent or soap and referred to the fact that this plant’s roots, in the manner of agave and yucca roots generally, can be made into cleansing products.