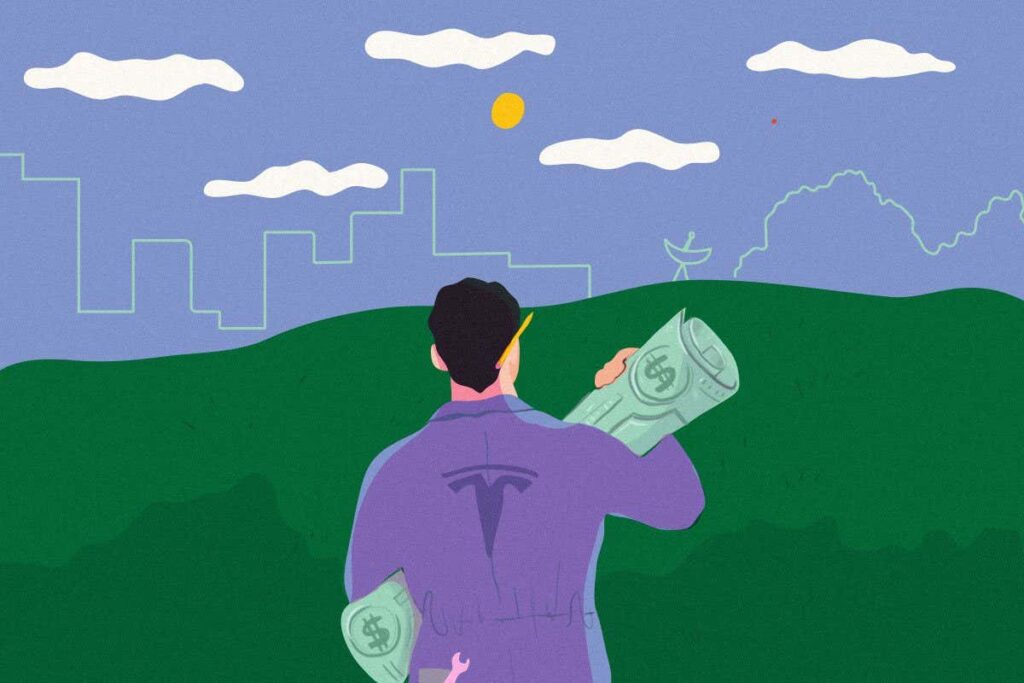 What’s next now Tesla is worth a trillion dollars?

Financially speaking, Tesla is a massive success. The question is what will it do with all that money, wonders Rowan Hooper

When Elon Musk joined the fledgling car firm Tesla in 2004, he put in $6.5 million to become majority shareholder and chair of the board. Seventeen years later, in October this year, the firm reached a market value of $1 trillion, only the sixth US company to do so, and the second-fastest, after Facebook.

While much talk in financial circles concerns the company’s balance sheet – it is the lowest-revenue business to achieve a $1 trillion valuation – I am more interested in what comes next and how it encourages rapid change towards a greener future.

Musk has long been clear that the ambition for Tesla is not just about building electric cars, but also about disrupting the entire economy.

Tesla is a major manufacturer and installer of photovoltaics in the US, with plans for expanded production of solar panels and roof tiles. You can imagine the corporate vision is one where every house has a Tesla solar roof feeding a Tesla electric vehicle parked outside. The company is already one of the largest manufacturers of batteries and energy storage systems at scales ranging from vehicles to homes to entire grids.

So what’s next? It would be great if Musk could make heat pumps sexy, though even he might struggle with that. Perhaps a different approach would be to wrap it all up as a net-zero housing offering. The TeslaHouse? I would live in it – if I could afford it.

I had an interaction with Musk that gives me a clue as to where else the company might go. Just before my book How to Spend a Trillion Dollars came out this year, I sent Musk a copy in the hope he might provide a blurb for the cover. He said he would read it. When I prodded him a bit later, he responded, “Is that the book with [Amazon founder Jeff] Bezos in it?” and then I heard nothing more. Well, he is a busy man. But then a few months later, something strange happened.

My book is about the global and scientific problems you could solve, or at least tackle, if you had huge funds at your disposal. In one chapter, I look at the problem of getting carbon dioxide out of the atmosphere and suggest that a good way to stimulate the development of technology to do this at scale would be to launch a lucrative competition. I suggest a prize of $100 million to the first group able to remove and bury 100,000 tonnes of CO₂ , or to remove 1 tonne of CO₂ for $200.

After being sent my book, Musk announced he was launching the XPrize Carbon Removal – with a prize of $100 million. Even if it isn’t strictly true, it is nice to say that I spent $100 million of Musk’s money.

So why is Musk so interested in CO₂ removal? Well, it currently costs about $600 to capture 1 tonne of CO₂. Once the price comes down, you can imagine the demand there will be from firms and individuals to pay to offset their carbon emissions. You can imagine the size of the future market. Scaling up production of carbon-capture units will be a multibillion-dollar industry.

We mustn’t forget Mars. A lot of what Musk does is directed towards the bigger goal of settling on that planet. The atmosphere of Mars is about 95 per cent CO₂ and a device that can efficiently remove it from the air will be useful for making food and fuel.

You might not agree that settling on Mars while our own planet is in such terrible shape is a worthy thing to do, and you might be uncomfortable or even repelled by claims of Musk’s behaviour or the terms of employment for his staff or the amount of tax he has or hasn’t paid. That isn’t the point here.

The point is that his strategy has worked. Musk now really has a lot of money at his disposal – a point made on October 31 when he tweeted about a comment made by David Beasley, director of the UN World Food Programme. Beasley had pointed out that just one-sixth of the recent increase in the value of Tesla, amounting to $6 billion, could help save 42 million people suffering from famine. Musk responded by tweeting that if Beasley could show how the $6 billion could achieve that, he’d sell Tesla stock and give him the money.

We shall see. I hope that Tesla’s trillion-dollar valuation spurs the company to roll out more green solutions on Earth and inspires new start-ups to do the same.