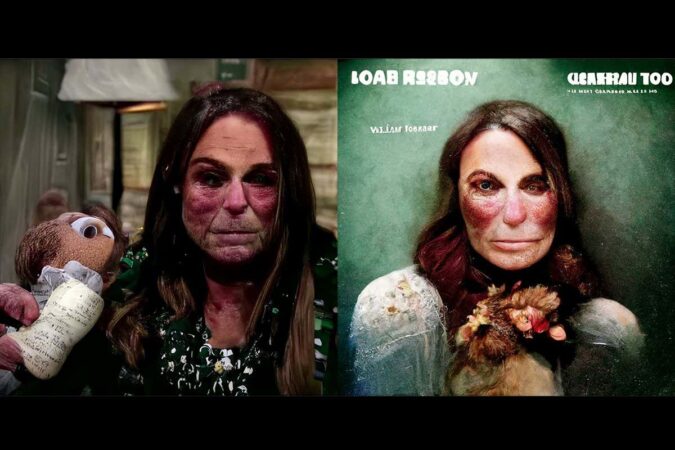 Some artificial intelligences can generate realistic images from nothing but a text prompt. These tools have been used to illustrate magazine covers and win art competitions, but they can also create some very strange results. Nightmarish images of strange creatures keep popping up, sometimes known as digital cryptids, named after animals that cryptozoologists, but not mainstream scientists, believe may exist somewhere. The phenomenon has garnered national headlines and caused murmuring on social media, so what’s going on?

What images are being generated?

One Twitter user asked an AI model called DALL-E mini, since renamed Craiyon, to generate images of the word “crungus”. They were surprised by the consistent theme of the outputs: image after image of a snarling, hairy, goat-like man.

Next came images of Loab, a woman with dark hair, red cheeks and absent or disfigured eyes. In a series of images generated by one artist, Loab evolved and cropped up in ever more disturbing scenarios, but remained recognisable.

Are these characters discovered, invented or copied?

Some people on social media have jokingly suggested that AI is simply revealing the existence of Crungus and Loab, and that the consistency of the images is proof they are real beings.

Mhairi Aitken at the Alan Turing Institute in London says nothing could be further from the truth. “Rather than something creepy, what this actually shows are some of the limitations of AI image-generator models,” she says. “Theories about creepy demons are likely to continue to spread via social media and fuel public imagination about the future of AI, while the real explanations may be a bit more boring.”

The origins of these images lie in the vast reams of text, photographs and other data created by humans, which is hoovered up by AIs in training, says Aitken.

Where did Crungus come from?

Comedian Guy Kelly, who generated the original images of Crungus, told New Scientist that he was simply trying to find made-up words that AI could somehow construct a clear image of.

“I’d seen people trying existing things in the bot – ‘three dogs riding a seagull’ etc. – but I couldn’t recall seeing anyone using plausible-sounding gibberish,” he says. “I thought it would be fun to plug a nonsense word into the AI bot to see if something that sounded like a concrete thing in my head gave consistent results. I had no idea what a Crungus would look like, just that it sounded a bit ‘goblinny’.”

Although the AI’s influences in creating Crungus will number in the hundreds or thousands, there are a few things that we can point to as likely culprits. There is a range of games that involve a character named Crungus and mentions of the word on Urban Dictionary dating back to 2018 relate to a monster that does “disgusting” things. The word is also not dissimilar to Krampus – a creature said to punish naughty children at Christmas in some parts of Europe – and the appearance of the two creatures is also similar.

Mark Lee at the University of Birmingham, UK, says Crungus is merely a composite of data that Craiyon has seen. “I think we could say that it’s producing things which are original,” he says. “But they are based on previous examples. It could be just a blended image that’s come from multiple sources. And it looks very scary, right?”

Where did Loab come from?

Loab is a slightly different, but equally fictional beast. The artist Supercomposite, who generated Loab and asked to remain anonymous, told New Scientist that Loab was a result of time spent trawling the outputs of an unnamed AI for quirky results.

“It says a lot about what accidents are happening inside these neural networks, which are kind of black boxes,” they say. “It’s all based on images people have created and how people have decided to collect and curate the training data set. So while it might seem like a ghost in the machine, it really just reflects our collective cultural output.”

Loab was created with a “negatively weighted prompt”, which, unlike a normal prompt, is an instruction to the AI to create an image that is conceptually as far away from the input as possible. The result of these negative inputs can be unpredictable.

Supercomposite asked the AI to create the opposite of “Brando”, which gave a logo with the text “DIGITA PNTICS”. They then asked for the opposite of that, and were given a series of images of Loab.

“Text prompts usually lead to a very wide set of outputs and greater flexibility,” says Aitken. “It may be that when a negative prompt is used, the resulting images are more constrained. So one theory is that negative prompts could be more likely to repeat certain images or aspects of them, and that may explain why Loab appears so persistent.”

What does this say about public understanding of AI?

Although we rely on AIs daily for everything from unlocking our phones with our face to talking to a voice assistant like Alexa or even for protecting our bank accounts from fraud, not even the researchers developing them truly understand how AIs work. This is because AIs learn how to do things without us knowing how they do them. We just see an input and an output, the rest is hidden. This can lead to misunderstandings, says Aitken.

“AI is discussed as though it is somehow magical or mysterious,” she says. “This is probably the first of many examples which may well give birth to conspiracy theories or myths about characters living in cyberspace. It’s really important that we address these misunderstandings and misconceptions about AI so that people understand that these are simply computer programs, which only do what they are programmed to do, and that what they produce is a result of human ingenuity and imagination.”

“The spooky thing, I think, is really that these urban legends are born,” says Lee. “And then children and other people take these things seriously. As scientists, we need to be very careful to say, ‘Look, this is all that’s really happening, and it’s not supernatural’.”