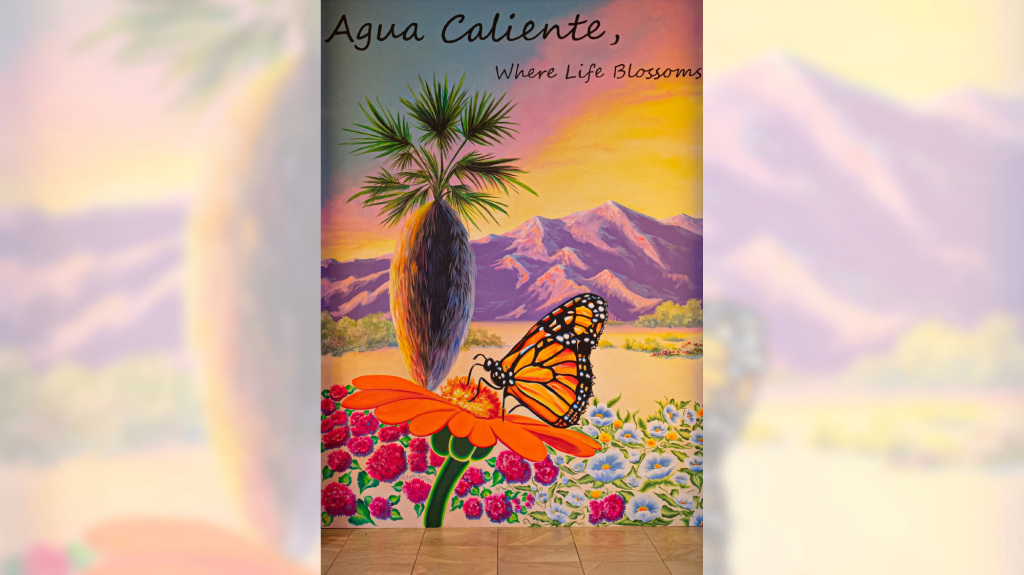 Look at the location tag for Agua Caliente Resort Casino Spa Rancho Mirage on Instagram and there are loads of recent pictures of people posing in front of a desert fan palm tree rising up from the desert landscape at sunset.

However, it’s not a real desert scene, but rather a new mural from artist Autumn Martino that sits next to one of the resort’s elevators near the hotel lobby.

The piece is one of several seasonal installations that have gone up as the resort seeks to use art as a way to not only celebrate artists, but also to draw in visitors. Other artists whose work has made it into the resort include Kelsey Montague and Jessica K. Haas. The art program is something the Rancho Mirage Resort has been doing for more than a year.

The pieces usually have an interactive component where people are encouraged to stand in front of them and have their pictures taken and inevitably those pictures end up on Facebook and Instagram, which is something the resort encourages.

Darrel Kammeyer, vice president of marketing for Agua Caliente Casinos, says part of the Coachella Valley experience is its art and the casinos wanted to have representations of that. They also wanted art to be an attraction point for visitors.

“It’s interactive, it’s memorable, it documents it and it also suggests to other people that may want that same type of experience to come and try us out as well,” he said.

Martino, a Palm Desert artist, said social media also plays a big role in the creation of her art. She says she looks to see what people are interacting with on her Instagram page.

“It also helps you know what people like by how many people like a certain painting,” she said. “You’re like, OK, that’s what we’re going for.”

“That’s how I was able to achieve this mural job is through Instagram, because someone was able to see my artwork and say, ‘hey would you be able to do this?’,” she said.  “It’s an amazing tool and I’m very thankful that I was born in this era to be a part of it.”

“I think it’s going to be something that we’re going to continue to grow and look for other ways to bring in other types of artists as well into our properties,” Kammeyer said.

Agua Caliente is not alone. Casino properties throughout Southern California have made more visible forays into social media marketing. Sometimes that comes in the form of attractions such as art installations or Morongo Casino, Resort & Spa’s MEBar and other times casinos will take a more active stance and invite social media influencers in to create content.

Martino’s artwork in Rancho Mirage is a springtime scene featuring a California fan palm with a skirt (an important symbol for the Agua Caliente Band of Cahuilla Indians) with mountains in the background and a field of flowers in the foreground. A monarch butterfly sits on a bright orange flower. A phrase above the painting reads “Agua Caliente, where life blooms”. The piece is expected to stay up several months.

It was important to have a springtime scene for this painting, Kammeyer said.

“To me it kind of celebrates a new beginning particularly since we’ve been through such a horrific time with the pandemic and it’s kind of a nod to a hopeful future for us,” he said.