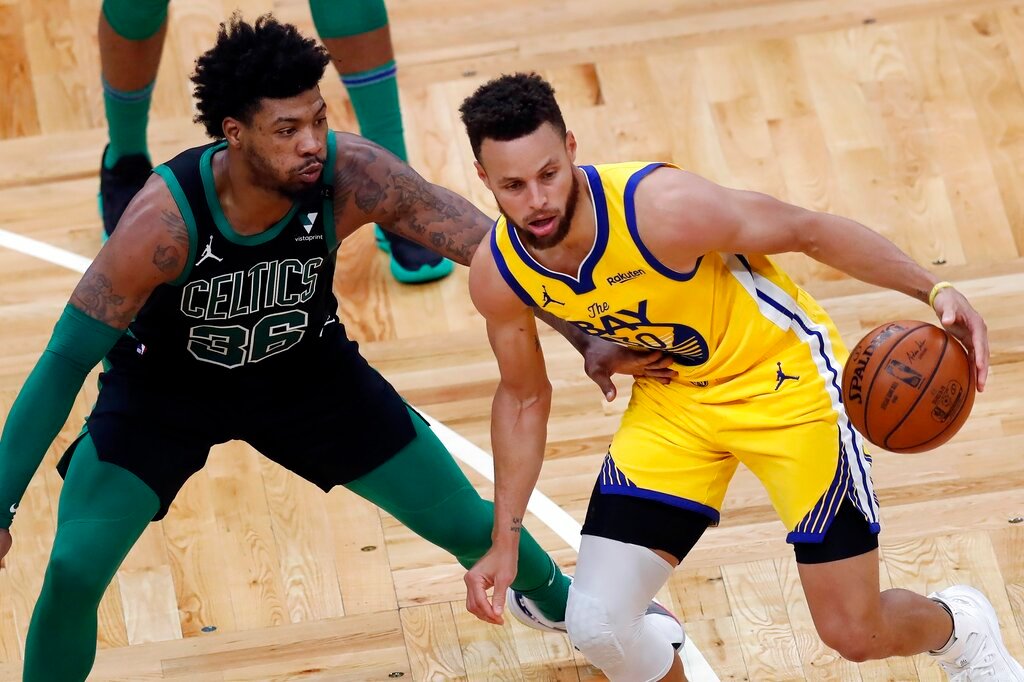 Midway through the fourth quarter of Saturday night’s loss in Boston, Stephen Curry curled off a screen, planted his foot, turned his left ankle and tumbled to the floor.

Although Curry finished the game and hit three 3-pointers on his way to 47 points and nearly carried the Warriors to the win, Curry’s availability for Monday night’s game in Philadelphia is yet to be determined.

“Kind of (like) the usual ones I’ve had in the past,” said Curry, who dealt with multiple ankle injuries early in his career. “I kept playing, so that’s a good sign in terms of where the pain was, but we’ll see how it responds tomorrow. It’s kind of a guessing game at this point.”

Warriors Stephen Curry on how his ankle feels after tweaking it during the game against the Celtics. #GSWvsBOS #DubNation #WarriorsGround pic.twitter.com/HObmyXawYY

Had they won, the Warriors would have extended their win streak to five games and moved a game ahead of the San Antonio Spurs for sole possession of the No. 9 seed in the Western Conference. Instead, the loss drops them back to below .500. Still, a loss to the Celtics may end up being the least of their worries if Curry misses games with the injury.

Losing Curry now would come at an awful time for the Warriors who have won five of their last seven and are playing the best basketball of the season during this playoff push.

Curry, meanwhile, is putting together one of the greatest statistical stretches of his career. After scoring 47 points and making 11 3-pointers at TD Garden, Curry over his last 10 games is averaging 39.1 points on 54.6% shooting overall, including 48.6% on 14 3-point attempts per game.

“I mean, statistically it is, for sure,” Curry said when asked if this is the best scoring run of his Hall of Fame career. “This season required something a little different. I’m trying to meet that moment.

“I’m trying to sustain that throughout the season,” he said, “because it’s required for us to get to get to where we want to go.”

Helping Curry’s scoring surge is the fact that the Warriors have committed to playing smaller lineups that ratchet up the tempo and space the floor. Because starting center James Wiseman has been ruled out for the season with a meniscus tear, playmaking forwards Draymond Green and Juan Toscano-Anderson fill minutes at center and Golden State has found a rhythm over the last few games.

“When we play small like we’re doing, it spreads the floor and he gets more opportunities,” head coach Steve Kerr said after Wednesday’s win against the Oklahoma City Thunder. “It’s really a comfortable game for Steph and Draymond when we play this way.”

With 15 games left in the regular season, a prolonged Curry absence could threaten Golden State’s playoff hopes. The Warriors are 1-7 in games without their leading scorer this season and, after Monday’s game against the Eastern Conference-leading 76ers, winnable games against the Washington Wizards, Denver Nuggets and Sacramento Kings look much more difficult without Curry.

“When we don’t (have him), it gets really hard,” Green said of Curry.

The Warriors are off Sunday, but Curry and the training staff will monitor the left ankle for soreness and swelling before making a decision on his availability for Monday.

“Honestly I have no idea,” Curry said when asked if he thinks he’ll play. “I’m hopeful, though.”

In addition to Curry, the team will keep an eye on guard Kelly Oubre Jr., who has missed the last five games with a wrist injury, and Toscano-Anderson, who on Saturday night was entered into the league’s concussion protocol. It’s possible the Warriors could go into Monday with just nine available rotation players.

But the Warriors have endured injuries to Curry’s supporting cast all season long because of his incredible play. With him, they have a chance. Without him, the Warriors’ breakthrough could come undone.