The dramatic increase, far above the national average of 5.7%, is expected largely because of a demand in Indiana for wind turbine technicians.

“Indiana will continue to see growth in green-related jobs, especially as we consider the transformation of Indiana’s electric generation portfolio,” Ryan Hadley, executive director of the Indiana Office of Energy Development, told WorkingNation in an interview for the “Green Jobs Now” project. “Over the last decade, Indiana has grown its wind generation output from virtually zero in 2008 to 6.5% percent in 2020.”

Lightcast, which collected and analyzed original data for WorkingNation’s multi-state Green Jobs Now project, estimates that there already are more than 11,678 workers in Indiana’s green economy, a moderate amount when compared to other states.

“Green Jobs Now: Indiana” identifies the state’s most in-demand green skills – “energy conservation,” “energy efficiency” and “renewable energy” knowledge, according to the data – and occupations where green skills matter. It suggests certain workers could get annual salary boosts of perhaps $800 or more by applying green skills, with boosts upwards of $8,000 for some positions. That demonstrates the value to workers of learning green skills and to local economies of having training available as the federal government begins to deploy a $1.2 trillion infrastructure investment that should boost green jobs nationwide.

In Indiana, Lightcast estimates 1,146,364 workers, if given access to training, could be reskilled into green jobs.

“Green Jobs Now: Indiana” is the latest state-focused installment of the WorkingNation/Lightcast “Green Jobs Now” series, a data-driven journalism project to define and identify green jobs and skills, pinpoint where workers can find them, and present a vivid snapshot of the green economy. Prior installments examined green jobs in Pennsylvania, Louisiana, Colorado, Arkansas, Illinois, Mississippi, Iowa and nationally.

The Indiana reporting, supported by a grant from the Walton Family Foundation, initially will include a WorkingNation.org overview article by Laura Aka and an in-depth report from Lightcast on the underlying data. Future elements will include an episode of the “Work Green, Earn Green” audio podcast and an “I Want That Job!” video offering an inside look at a green occupation in Indiana. 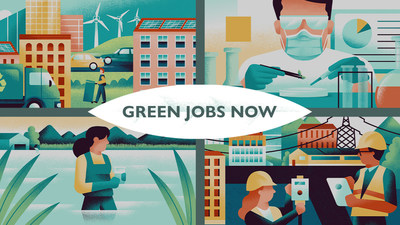