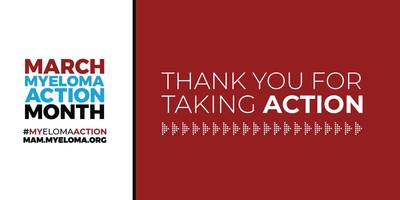 With Over 30 Million Reached Across 46 Countries, the International Myeloma Foundation (IMF) Makes a Global Impact for 2022 Myeloma Action Month

STUDIO CITY, Calif., April 7, 2022 /PRNewswire/ — As this year’s Myeloma Action Month came to a close, the International Myeloma Foundation (IMF) was unwavering in achieving its goals. By encouraging individuals and groups to take action for myeloma through a powerful social media campaign, the IMF succeeded in increasing awareness of the disease, and in inspiring a culture of hope and resilience among the members of the myeloma community.

46 countries joined the #MYelomaACTION movement and reached over 30 million people across the globe.

The IMF is proud to report that the myeloma community went above and beyond when it came to taking action and making a difference for myeloma. Despite the pandemic and an ongoing conflict in Ukraine, the global community came together to participate in the Myeloma Action Month movement— with over 30 million people in 46 countries reached across the globe.

IMF President & Chief Executive Officer and 26-year myeloma survivor Yelak Biru is truly elated at the success of this year’s Myeloma Action Month: “Throughout this year’s Myeloma Action Month, the IMF focused on encouraging engagement through the theme, #MYelomaACTION. Each of us has a role in advancing the art and science of cancer care in general, for better outcomes for myeloma in particular.”

In 2009, the IMF launched March as Myeloma Awareness Month to shed light on this little-known cancer. By 2016, the organization elevated the campaign to Myeloma Action Month, with the added purpose of encouraging individuals and groups to take actions that positively impact the myeloma community.

Forty-six countries joined the #MYelomaACTION movement this year, with Myeloma Action Month social badges and infographics translated into more than 12 international languages. Individuals and groups shared their actions, posts, and photos across the globe.

Some of the highlights of this year’s Myeloma Action Month include:

Thanks to the kind and generous contributions of individuals and groups, the IMF is delighted to announce that 2022 Myeloma Action Month made an enormous difference in building a powerful mosaic of activity for every myeloma patient, caregiver, nurse, doctor, and advocate — thus, fortifying the myeloma community’s collective hope, understanding, and resilience.

ABOUT MULTIPLE MYELOMA
Multiple myeloma is a cancer of the bone marrow plasma cells — white blood cells that make antibodies. A cancerous or malignant plasma cell is called a myeloma cell. Myeloma is called “multiple” because there are frequently multiple patches or areas in bone where it grows. It can appear as both a tumor and/or an area of bone loss, and it affects the places where bone marrow is active in an adult: the hollow area within the bones of the spine, skull, pelvis, rib cage, and the areas around the shoulders and hips.

ABOUT THE INTERNATIONAL MYELOMA FOUNDATION
Founded in 1990, the International Myeloma Foundation (IMF) is the first and largest global foundation focusing specifically on multiple myeloma. The Foundation’s reach extends to more than 525,000 members in 140 countries worldwide. The IMF is dedicated to improving the quality of life of myeloma patients while working toward prevention and a cure by focusing on four key areas: research, education, support, and advocacy. The IMF has conducted more than 250 educational seminars worldwide, maintains a world-renowned InfoLine, and in 2001, established the International Myeloma Working Group (IMWG), a collaborative research initiative focused on improving myeloma treatment options for patients. In 2012, the IMF launched the Black Swan Research Initiative®, a groundbreaking research project aimed at curing myeloma. The IMF can be reached at (800) 452-CURE (2873). The global website is www.myeloma.org.