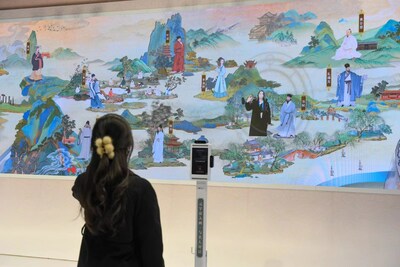 BEIJING, Jan. 3, 2023 /CNW/ — The ongoing 18th China(Shenzhen) International Industries Fair, which showcased achievements of the digitalization strategy for cultural industry, has attracted a number of high-tech enterprises in the fields of 5G, big data, cloud computing, and artificial intelligence to participate in.

The 14th Five-Year Plan for Cultural Development, released in 2022, proposes that China will strengthen its innovation drive, and promote the upgrading of its industrial base and the modernization of its industrial chain in the next five years.

In fact, digitalization has become a catalyst for China’s cultural industry, and a large number of cultural resources have been revitalized with the empowerment of digital technology.

For example, Chinese internet giant Tencent and Dunhuang Academy are working together to digitize the cultural relics in the Dunhuang caves. Liu Xiaolan, Tencent’s project leader, said that digital technology will move Dunhuang cultural relics online, and people can feel the cultural charm of thousands of years in the digital caves.

Besides, virtual reality (VR) technology is playing an increasing role in the digitalization of the cultural industry. SenseTime, an artificial intelligence unicorn company, has moved Hangzhou West Lake to the AR world, visitors only need to scan the real scene with their mobile phones to open the AR navigation guide mode and experience immersive real scene navigation and virtual and real fusion navigation.

Shenzhen’s cultural industry has maintained a rapid development momentum in the past ten years, with an average annual growth rate of more than 15 percent. Creative design, animation games, digital culture and other industries have showed strong competitiveness, and more than 25 percent of cultural enterprises above the scale have the qualification of national high-tech enterprises.

According to the Ministry of Culture and Tourism, digital technologies such as 5G, big data, AR/VR, artificial intelligence, and ultra-high definition have been widely used in the cultural industry, new formats such as cloud exhibitions, online broadcasts, digital art, and immersive experiences have developed rapidly, and a number of digital cultural boutiques with distinctive Chinese cultural characteristics have continued to emerge.