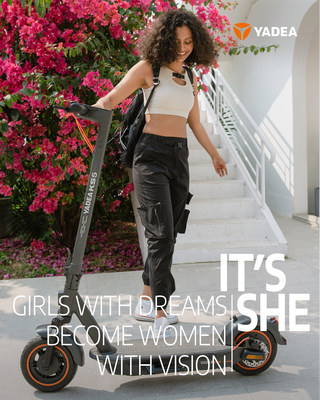 MUNICH, March 10, 2022 /PRNewswire/ — This International Women’s Day, Yadea (01585:HK), the world’s leading electric two-wheeler brand, is recognizing and lifting women up with the launch of its new “IT’S SHE” social media campaign. Taking place between March 6 and 11, “IT’S SHE” reinforces Yadea’s recognition of the values and achievements of women.

“We hope that through activities such as the “IT’S SHE” campaign to convey the concept to the world that a woman should never be defined. At the same time, our latest campaign embodies Yadea’s advocacy for diversity in female communities and conveys our appreciation for women and their ongoing contributions in the world,” said Aska Zeng, General Manager of Yadea.

In anticipation of the launch, Yadea released a teaser video across its social media platforms on March 6, which showcases diverse portraits of women in a 3×3 grid. Following this, the brand launched its official full-length video on March 8 for International Women’s Day.

Inspirational and uplifting, Yadea’s “IT’S SHE” video celebrates the individuality of women and demonstrates its commitment to accompany them as they grow, move forward, and forge their own paths. The video brings together women from multiple industries and walks of life, from artists and entrepreneurs to athletes, models, parents and leaders. Designed to showcase the boundless diversity of women, be they dynamic or tranquil, outgoing or introverted. Yadea’s video reinforces the idea that a woman should never be defined.

Additionally, Yadea has unveiled its new manifesto for women via a trio of posts on social media. The posts cast a close-up on various women’s expressions as they navigate through a variety of scenarios, emphasizing that they are a force that cannot be ignored and encouraging them to pursue their authentic selves — no matter their age, experiences, or situation.

Alongside each post, Yadea is encouraging users to comment and share their own experiences as a woman, as well as real inspirational stories of women they have encountered. By encouraging interaction between women in the community, Yadea hopes to build stronger bonds between netizens and strengthen support for equality in the future.

“Once again, we would like to wish a happy International Women’s Day to all women around the world. Yadea is proud to walk alongside you and accompany you to Electrify Your Life,” said Zeng.

Yadea is a global leader in developing and manufacturing electric two-wheel vehicles including electric motorcycles, electric mopeds, electric bicycles and electric kick scooters. To date, Yadea has sold products to 50 million users in over 80 countries, and has a network of 35,000+ retailers worldwide. With a mission to help people “Electrify Your Life”, Yadea continues to invest in R&D, production and global expansion to build a shared and sustainable future for humankind.