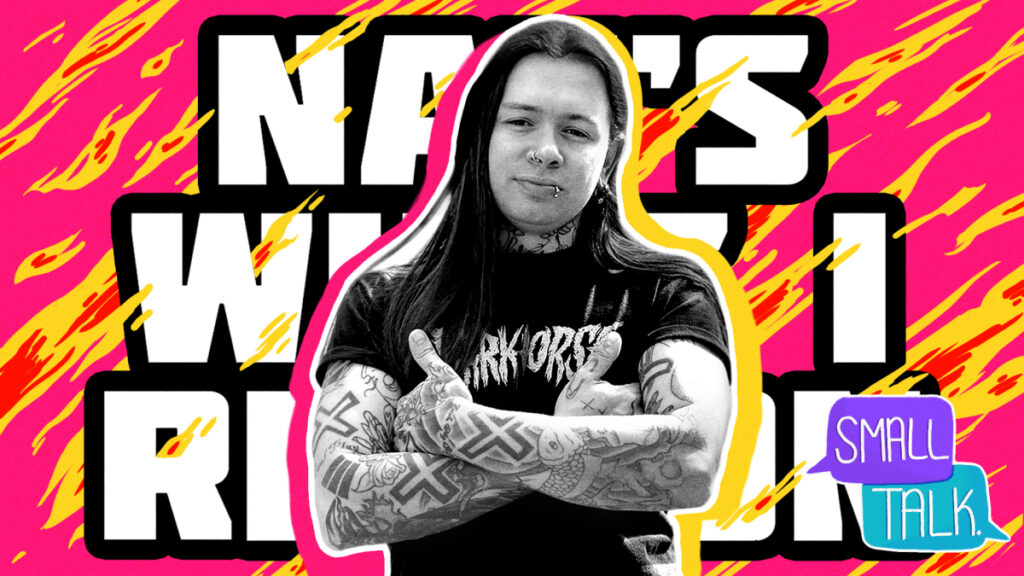 YouTuber, author, and cook Nat’s What I Reckon threw jar sauce in the bin to empower people

Welcome to Small Talk, a series where we catch up with the internet’s favorite Extremely Online individuals offline.

If you’re about to cook dinner, opening up your cupboard, taking a cheeky jar of Chicken Tonight from the shelf, you might take a second to check the dodgy amount of additives in that bad boy and swiftly chuck it in the bin. Then, Nat’s What I Reckon can help you cook the real deal.

The Australian comedian, author, musician, mental health advocate, and anti-jar sauce campaigner launched his YouTube channel in 2006, and since then he’s clocked up almost 23 million views over the years. Nat gained a huge amount of followers in 2020 when he used his skills during the pandemic to help people cook from scratch at home during lockdown, creating recipes like “Quarantine Sauce” when he noticed people were panic-buying not only toilet paper but pre-made jar sauce.

Now specialising in empowering viewers champions to cook their own homemade meals with actual ingredients instead of instant packet stuff, Nat has long been making videos (with his partner in crime, Jules, a fan favourite) that especially do not encourage using ’80s style methods relying on the “electrical sin bin” that is the microwave — his is lovingly named the “tucka fucka.” He’s had special guests like rapper Briggs and drag queen Courtney Act drop by, the editing is extremely swift, as are the mad bants — and the show’s new animated opening titles are straight-up fire.

Staunchly opposed to dodgy ingredients (mainly additives, powders, and flavourings with random factory numbers) and using actual, y’know, food, Nat creates recipes that are easily to follow, demonstrating them with his particularly Aussie brand of humour that’ll tell you it doesn’t bloody Parramatta if your dish or cooking setup isn’t 100 percent perfect.

One hell of a cover.
Credit: Penguin Random House

But there’s more to Nat’s channel than simply getting people to up their cooking game. A longtime mental health advocate, Nat’s shared his own experiences with anxiety and depression through standup, even reviewing them on his channel in a genuinely meaningful way. Nat examines and takes the piss out of outdated social norms and versions of success, and urges viewers not to be a dickhead to others or to themselves, instead promoting self-care, kindness, and celebrating “the little wins between the hard bits.” In 2020, Nat released his first book, Un-cook Yourself, a self-help guide to life filled with personal stories, with proceeds going to Australian mental health and wellbeing charity Beyond Blue.

We chatted to Nat about Death to Jar Sauce and why he does what he does — he even let us have a cheeky recipe from the book, for Honey Bastard Chicken, which you’ll find below.

Mashable: How different was it writing the cookbook (and your first book) to how you present your YouTube videos?

Nat: Both of them are a bit fucken off their head, my constant swearing and speaking in metaphor has made for some pretty hilarious illustrations in the book. I wanted to make sure, much like the channel, that people are having a solid laugh while reading the book and also hopefully getting a little inspired to cook some awesome shit.

How did you pick the recipes that went into the book?

I went for sure fire classic hits shit and of course a few of my all time fav “escape the packet” recipes. I have a lot of people message and comment their favourite stuff they wanna see me make on the channel, I’ve held out on making a few episodes so we can drop some heavily requested big bangers into the book  .

Why does empowering people to cook stuff at home themselves mean so much to you?

You can’t argue with a simple bit of joy in your day, and that’s what cooking does for me. I wanna share a bit of that with other people while not taking the shit too seriously. Life can get really heavy at times and garbage jar sauce doesn’t contribute to any of that joy in my opinion.

What was the biggest thing you learned during the pandemic while making your lockdown cooking videos?

As my best friend says “Party on John”…I think the thing I learnt is to have a little faith in myself and to keep partying on John with being creative. It takes fucken ages to find your audience sometimes, and it’s worth all the work. I am so desperate to make people laugh and cook them food all the time, I’m just so stoked I’ve managed to get the two together and kick a few between the posts.

Finally, what can hardcore fans of your YouTube channel expect to find in the book, any Easter eggs for them?

Me drawn as the Terminator making lasagne for a start, and a shitload of swearing and opinionated carry on. There’s also a few cameos from other channel characters that have muscled their way in. Thanks to my amazing artist mates we have created the most fucken out of control party time cookbook in town…well I hope so anyway. 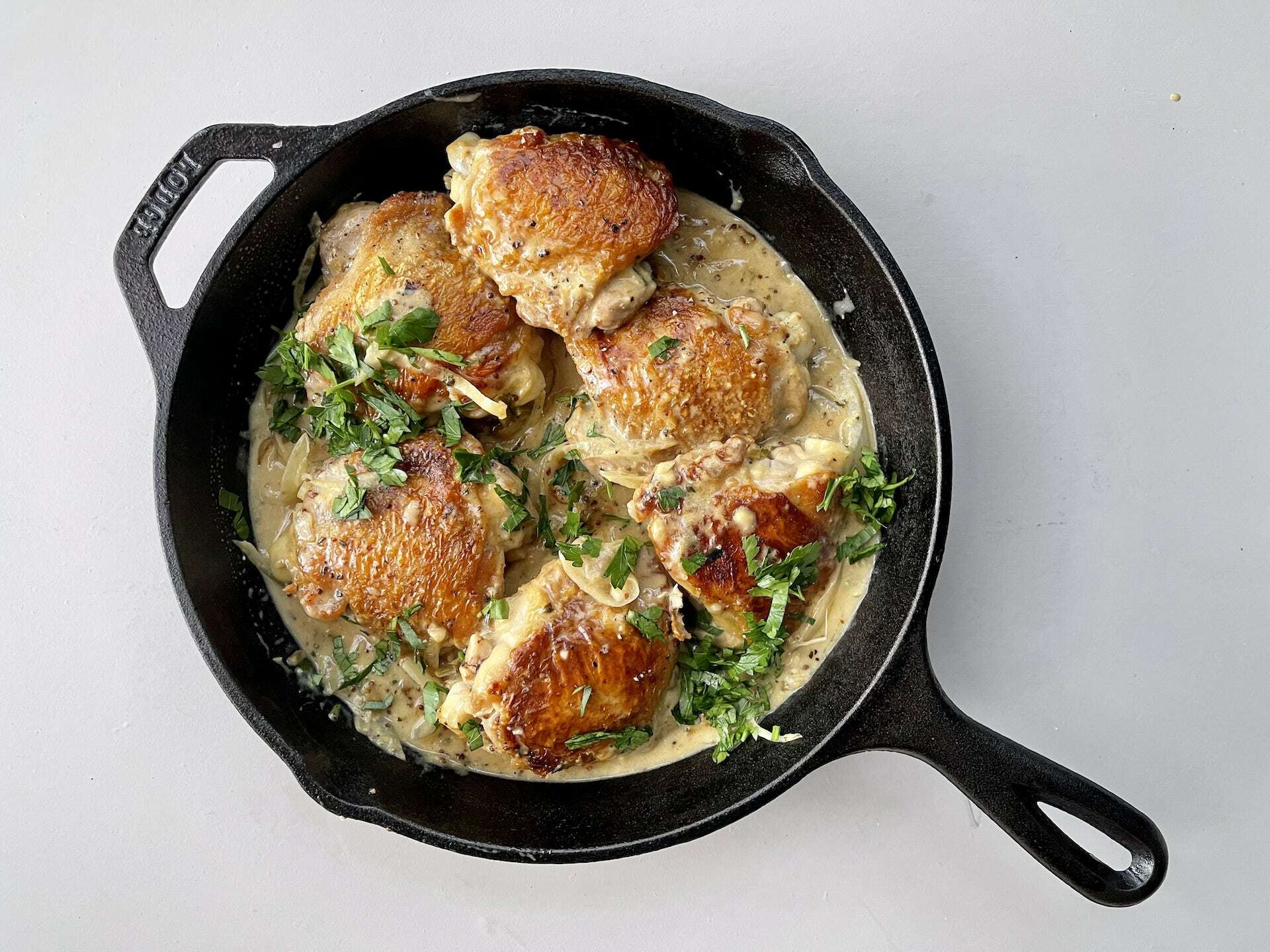 Honey mustard chicken is the most fucken relentlessly requested recipe on the channel and probably one of the most Defqon.1-level jar sauce abominations to ever hit the shelves. It’s such rotten garbage that I went totally off that bastard of a sickly-sweet dish for years, but I’M BACK CHAMPIONS AND WE’VE FIXED IT!

The idea is to help you escape any chance of having to eat that trash again. I’ve loved a bit of sweet and savoury action all the way back to an unhealthy obsession with Lemon Crisp biscuits as a kid. I actually did an advert for Pizza Shapes when I was eleven years old and I got paid in Lemon Crisp biscuits . . . Dad ate half of them, I think. Anyway, I’m getting a little off track here – this isn’t a freaken recipe for biscuits, but it is one for sweet and savoury chicken radness.

COOKING TIME: under an hour

Now you can of course do this with chicken breast but since making the shift to chicken thigh, life in general has become way better. Chicken breast is fine and all, but takes some work to stop it from tasting dry as a mouthful of fucken chalk. So let’s crack on with the skin-on thighs. Season them with salt and place skin-side down into a . . . wait for it . . . cold pan! Soz wot? Yeah that’s right champion, a cold pan with a tablespoon of oil in it. Turn on the stove to a medium heat but DON’T TOUCH the thighs. We want them to stay put face down rendering in the oil so they get super crispy pants. Keep the heat at medium until you hear it starting to sizzle me timbers, and from that point it’s 8 minutes until flip time. Once the skin side is golden brown town, use tongs to flip them over and give it a hard 5 on the other side (at the same heat).

Press the chicken thigh eject button and remove from the pan and rest on a plate while you crack on with the sauce. Into the recently vacated pan, add ya butter on medium heat again. Once that shit has melted fucken bang in ya onion and chopped-up parsley stalks sans leaves for 3-4 minutes until nice and soft. Then in we go with the garlic and thyme leaves and cook for another 2 minutes.

Mustard be about time to put ya bloody mustardzzz in the pan along with the honey, wine and stock as you bring it ever so awesomely to a simmer, champion.

In a bowl bung in your flour and spoon in a little of the pan juice then whisk together into a paste-like consistency. Now back into the pan with your magical chicken flour paste along with the crème fraîche or sour and cook for a few minutes.

OMG what the fuck is this chicken still doing on a fucken plate right now?’ All good, let’s fix that wagon and bung it back into the mustardy creamy non jar-ey goodness with the chicken skin facing up so the sauce doesn’t kill all that crispy hard work. Give it around 5 minutes in the sauce there boss; we wanna heat it up good. Undercooked chicken is a not-so-fun ride on a slippery slide to bad news, so make sure it’s heated through.

Now taste that and tell me you’d rather eat that fucking chat jar of yellow slime they call “honey mustard sauce”. Reckon ya won’t.

Scatter with parsley leaves if you like, they make it look super rad.

Serve with a scoop of ice cream…just kidding, maybe some veg, mash or rice… whatever you like, legend face.

Death to Jar Sauce by Nat’s What I Reckon is out now through Penguin Random House.