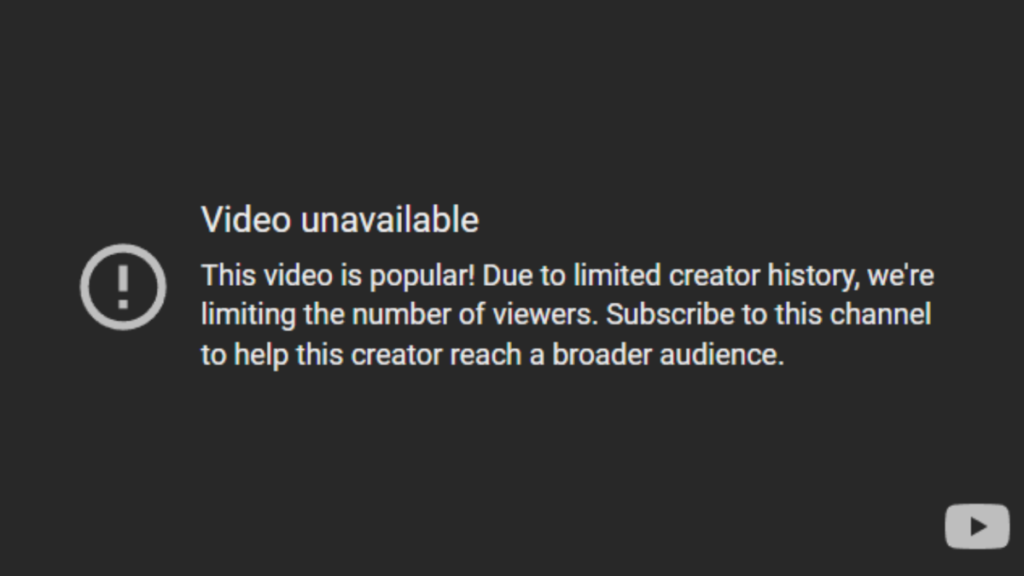 YouTube’s limiting views on some videos. Here’s why.

It’s always a bummer when you click through a YouTube link and see that message. Sometimes this means the video has been deleted. Other times it means the user changed the video’s settings to make it private.

However, over the past few weeks, YouTube viewers have noticed a new “video unavailable” message:

“This video is popular!” reads the warning, blocking viewers from watching the YouTube video. “Due to limited creator history, we’re limiting the number of viewers. Subscribe to this channel to help this creator reach a broader audience.”

Word quickly spread on social media about the warning. A Reddit post from Feb. 2, on the topic received more than 50,000 upvotes. Conspiracy theories disseminated on Twitter, with users believing that YouTube implemented this new policy specifically to stifle livestreams from the far right, anti-vaccine mandate rallies that have been happening in Canada.

However the “limited creator history” is not a direct response to current events.

According to YouTube, the company officially instituted a new policy in September 2021 regarding mobile live streaming. Prior to the change, a user could not stream to their YouTube channel via mobile device unless they had at least 1,000 subscribers. The change to that policy allowed anyone with a YouTube channel to livestream via their mobile device with some “guardrails” in place.

One of those guardrails is to limit viewers on mobile livestreams hosted on small channels in order to prevent abuse and limit those who seek to quickly spread harmful content. The policy is broad and effects the whole platform, meaning, even if a particular stream isn’t abusive or spreading harmful content, this message will appear if they have less than 1,000 subs.

“We’re always exploring new ways to let creators use more features while keeping our community safe,” a YouTube spokesperson said in an email conversation with Mashable. “To help smaller, aspiring creators, while preventing abuse of mobile live streaming, we’ve created safeguards to limit the spread of potentially harmful content. If a channel has less than one thousand subscribers, we limit the number of viewers on mobile live streams.”

Mashable found the earliest Twitter mention of the “limited creator history” warning dating back to more than a month ago, on Jan. 8, 2022. A Twitter user attempting to watch a dog sledding livestream being broadcast by a channel with less than 300 subscribers reported receiving the message.

The first report of seeing this warning on Twitter happened a full two weeks before the trucker convoy began. And limiting views on dog sledding stream is not exactly stifling political dissent, thought it does seem annoying if you’re an Iditarod fan.

But YouTube has long required users to build their channels and develop a repertoire on the platform before being able to access certain features. From the company’s standpoint, this minimizes abuses on the platform.

The policy also likely aids their community guidelines policies by preventing ban evasions from suspended users starting new accounts. If a YouTube received a strike and couldn’t stream on their channel, what would stop them from just livestreaming on a new channel they just setup? This policy.

And it’s also likely that another important aspect of the policy from the company’s standpoint is that it prevents fly-by-night channels from illegally streaming copyrighted content, like the Olympics or a new movie.

However, the warning message itself is rather vague. It doesn’t tell you quite how long a user will be prevented from watching the video. A user can also take the message to mean that if they subscribe to the channel, they can then immediately proceed to watch the video. (They can’t.) YouTube seems to be aware of the issue.

“We apply these safeguards to all channels who stream from mobile & have less than 1K subs,” said a YouTube spokesperson. “We understand that the in-product messaging might be confusing, which is why we’re working to update it.”