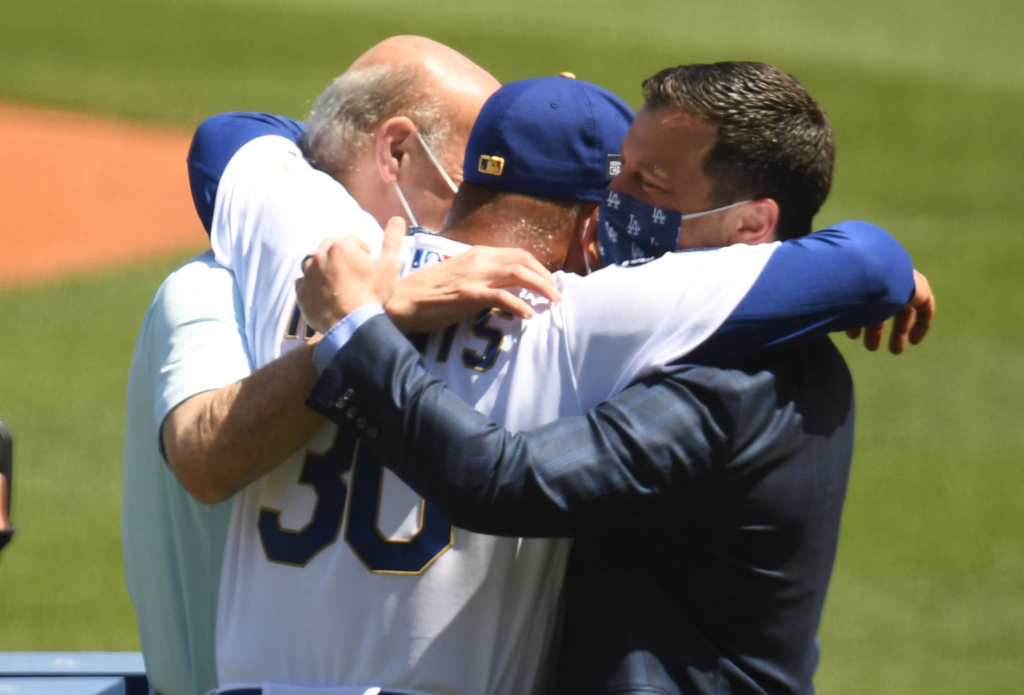 They have the rings, finally. Gaudy ones but classy at the same time, if that’s possible.

They’ll wear the uniforms and caps with the gold trim and the champions logo on the sleeve through the weekend. The huge flag with “2020 World Champions” now flies from one of the center field flagpoles. They’ve welcomed fans through the Dodger Stadium gates – including the brand new entrance in center field – for the first time in 19 months, appropriately socially distanced. And the organic sounds of real, live people Friday afternoon were and are a welcome change from last year’s canned crowd noise, which sometimes sounded as if it were coming from the bottom of a well.

Even longtime player agent and executive Dennis Gilbert being back in his seat behind home plate for real, rather than the cardboard cutout version of Dennis Gilbert, served notice that normalcy is near, that Dodger Stadium again feels like home.

And now it is finally, definitively, time for the home team to turn the page.

I suspect the Dodgers grasped that necessity long before now. A 6-2 record, following Friday’s 1-0 victory over Washington, certainly doesn’t suggest a team going through the motions or suffering from a World Series hangover, and in fact, more than one player has noted that the pandemic limits that prevented a mass civic celebration provided a ready-made motivation to repeat.

There should have been some closure Friday with the distribution of rings, but there remains a sense that the job isn’t really finished and truly won’t be until the floats and the convertibles are rolling down Broadway or Figueroa with triumphant players aboard.

“For me personally, you know, we didn’t get to celebrate after the World Series when we should have been celebrating, having a big parade back with our fans,” catcher Will Smith said. “Honestly, it makes me more hungry just to win this year and to get to throw that huge party. You know, I can just imagine two championships in a row, how big that’s going to be, how awesome it’s going to be. And I think that will really be where it hits me, if we won two. And hopefully, we can make that happen.”

This year already seems different in a good way.

The return of fans to The Ravine was not without its glitches on Friday. The club issued a statement acknowledging issues with the mobile ordering system for food and drink sales, saying it had “switched to traditional walk-up ordering” and would open additional concession locations beginning with Saturday’s game. (With social distancing protocols and health and safety precautions, of course.)

But having fans in the ballpark, and more importantly, hearing them, was a milestone.

“I don’t know the number of how many fans were here,” Manager Dave Roberts said after the game. “But it almost seemed like a packed house, and it was a great day.”

The announced number was 15,036. Roberts has talked in the past about how Dodger crowds at their largest and loudest can amplify the stress on the opposing team and create a home-field edge, and that energy was evident even with a smaller crowd.

“Last year I played 30 games here without (fans),” Smith said. “It was quiet, the fake crowd noise. But today, having them back, even just that 25, 30 percent capacity, whatever it was, it felt like a whole lot more than it was.

“… You know, just thinking about the top of the ninth inning there, (Reliever Corey) Knebel is pitching really well. And, you know, they really didn’t have a chance against him. He was on, the crowd was into it. And the three batters he faced, you could tell they can feel the crowd. I mean, it has an effect more than you really think.”

Championship celebrations at that first home game the next season can be a challenge, but the Dodgers have won six of their seven pennant raising/ring distribution occasions in L.A. (The Lakers, by way of contrast, are 7-5 on those celebratory nights in their L.A. history.)

Roberts came out to accept his ring after an introduction by Laura Lasorda, daughter of the late Tom Lasorda, in the first of what will be many remembrances of the Hall of Fame manager this season, including a ceremony Saturday night. But when Roberts received his ring and an embrace from club president Stan Kasten and president of baseball operations Andrew Friedman, overheard on the telecast were these words:

In other words, turn the page.