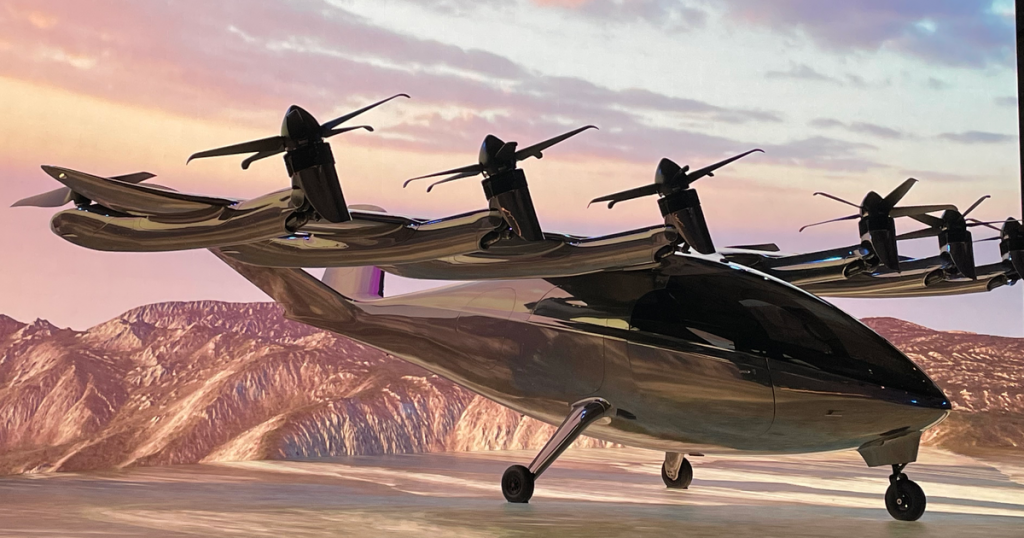 Archer reveals its Maker flying taxi, promising to lift us out of traffic hell

During rush hour traffic in Los Angeles Thursday, the city of gridlock got a first look at an electric flying taxi that’s part of a movement to shift commuters from the streets to the skies.

Aircraft developer Archer unveiled Maker, an electric vertical takeoff and landing aircraft (eVTOL) that can travel 60 miles at a top speed of 150 mph, to a crowd of about 100 people and many more on a livestream at an airport hangar just around the corner from SpaceX. The Maker, which takes off vertically like a helicopter but flies like a plane, is one of many electric aircraft that promise to shake up the transportation industry over the next decade.

“Who hasn’t sat in traffic wishing they could fly over it?” said Archer cofounder Brett Adcock.

The California company unveiled a two-seat demonstrator aircraft that may one day be autonomous, but it didn’t take off from the ground at its debut. Test flights are set for end of year and will be piloted. What Archer showed off in the hangar isn’t its answer to our bumper-to-bumper bummers, though. It envisions a five-seater piloted eVTOL zipping around Los Angeles and Miami by 2024.

How much will it cost to fly in Archer’s future air taxi? Just $3 to $4 per mile, said cofounder Adam Goldstein. A 15-mile trip from the bustle of downtown Los Angeles to beach-filled Santa Monica, which can take an hour in traffic, would take just eight minutes in one of Archer’s eVTOLs in 2024 — and cost $40. That’s comparable to taking an Uber Black, which is about $3 per mile with a $9 base fare.

“The whole goal is to make it affordable to the masses,” Goldstein remarked.

The fledgling eVTOL industry has to figure out charging issues, landing spots, optimum seating, integrating with other transportation options, convincing the masses that they’re safe — and to pay to ride them. Archer plans to use existing helipads and airports in Los Angeles and Miami at launch, but not every location has such infrastructure.

While the Maker’s debut put Archer center stage, a scathing legal challenge hung just behind the curtains. Archer recently defended itself against accusations of stealing trade secrets and copying patented innovations in court filings. Competitor Wisk, which has been developing eVTOLs for more than a decade, has . Maker’s design allegedly resembles Wisk’s own and Archer hired 10 Wisk engineers in 2020, one of whom downloaded thousands of files under the cloak of night before quitting, according to Wisk’s legal complaint. Archer has and has asked a judge to

The 3300-pound Maker looks like it has a helicopter body with jet wings. Instead of a large, loud rotor shooting up the center, it has 12 smaller ones, dotted along the 40-foot long wings’ front and back edges. Archer says the Maker will be inaudible when flying overhead due to its propellers’ low tip speeds. It’ll generate 45 decibels of sound, which falls somewhere in between the noise in a suburban area at night and a fridge’s hum. Archer boasts Maker can fly 50 miles from San Francisco to San Jose in 17 minutes.

Before Wisk sued, Archer secured a deal with United Airlines to buy t. It also got a $3.8 billion valuation after merging with a so-called “

While Archer didn’t fly the Maker at its unveiling, it tried to recreate the experience with panoramic images playing on a huge screen behind the aircraft and flashing lights as attendees watched in theater-style seating. Attendees also got to sit in an aircraft that so far has been only seen in carefully curated images.

If the Maker truly takes off in 2024, it Joby Aviation, another California company, also plans to make its five-seater eVTOL commercially available then. Uber, which had planned to unveil its air taxi in Texas last year, instead . However, the two plan to connect their apps for bookings. Meanwhile, two Uber Elevate cofounders joined Archer’s advisory board in March.

Germany’s Volocopter is charging 300 Euros ($365) for the first 1,000 people to take 15-minute flights in its two-seater in 2023 in Singapore. That’s a big jump from Archer’s promised fares. Also from Germany, Lillium expects to open its seven-seater to the public the same year as Archer and Joby.

How many seats a manufacturer stuffs into an eVTOL is a numbers game: More seats potentially mean more money, but they’d also require a bigger aircraft, which needs a larger, heavier battery to output more power, said Denis Heckmann, manager and lead of urban air mobility at mobility solutions firm FEV Consulting. Only one or two people tend to use car services on the ground per trip, so some eVTOL developers predict the same usage for their aircraft, he said from Dubai, which has been conducting autonomous air taxi demos since 2017 but still doesn’t have commercial operations. But encouraging ride pooling like Uber and Lyft could be advantageous cost-wise, too.

In five to six years, air taxis won’t be landing in your driveway like a flying car, Heckmann said. You’ll have to travel to so-called veristops or vertiports to use an eVTOL. The glorified helipads or mini airports will be costly infrastructure that operators will have to construct or lease.

As Archer eyes using existing infrastructure, Lillium expects to build that look like small airports, including in . Frisco, Texas is home to a before Uber sold it off; it’s just a slab of concrete with some yellow paint on it.

A NASA report forecasts that the market for eVTOL rides may be . But don’t expect to see the aircraft clogging the skies by then.

“It’s not becoming a metro in the sky,” Heckmann noted.

He was also more conservative about the cost of eVTOL flights compared to Archer’s estimates. He suggested that at first an eVTOL ride may generally be slightly less expensive than a helicopter trip, which can cost $200 per person for a 30-minute ride in LA, but that fares could come down for the industry over time as more people use eVTOLs. To do that, eVTOL companies must not just court current helicopter riders, but offer a new form of transportation to a greater pool of customers.

Still, most eVTOL passengers are likely to be well-heeled jetsetters or business commuters, . After the wealthy in Manhattan, Miami, and San Francisco make eVTOLs — maybe even unpiloted ones — profitable, somewhere down the line others may be able to afford a trip.

With funding from Hyundai, Los Angeles has started working on warming residents up to the idea of flying taxis. Last fall, the mayor’s office, in conjunction with the World Economic Forum, released a mission statement of sorts for air mobility. Among the promises:

Adcock and Goldstein painted a picture of people using their eVTOLs to commute to work, go rock climbing in a previously out-of-reach locale after work, or fly to a restaurant they normally wouldn’t go to because it’s too far away.

“Who’s going to use this service? Well, we think everyone,” Adcock said excitedly.