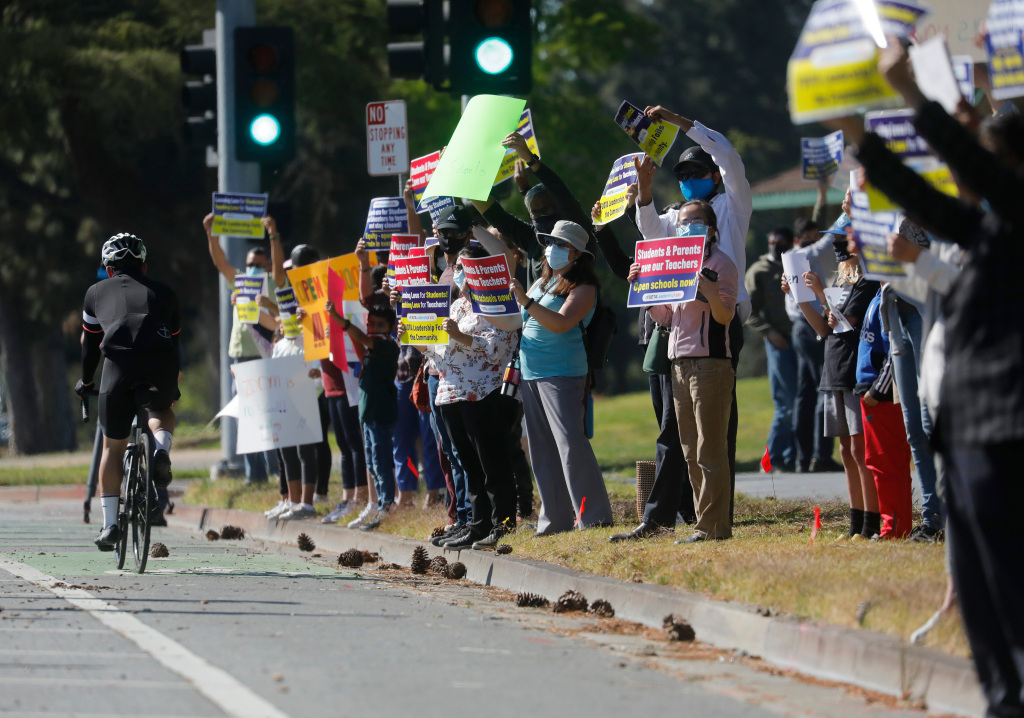 FREMONT — Dozens of parents pushing for schools to reopen for in-person instruction took to the sidewalks of Fremont Monday afternoon, holding a rally to keep up pressure on school district officials and teachers union leadership.

The rally comes just days after a lawyer representing a group of parents sent a letter to the district demanding schools reopen by April 26, or face a potential lawsuit.

“It’s high time for schools to open for any students who want to come back,” Padma Gopalakrishnan, a parent of two kids in Fremont schools, said Monday at the rally.

“Other districts have been able to do it. COVID is not any worse in Fremont than anywhere else. There is no reason to not open the schools,” she said.

The district superintendent, CJ Cammack, announced on March 31 that the district’s roughly 35,000 students would remain in distance learning for the remainder of the current school year after the district and the teachers union failed to reach an agreement on how best to reopen schools.

Some of the issues the district and union were split over included “staffing, the scope of grade levels eligible for a full return, and additional compensation for employees,” Cammack said in a prior newsletter.

Gopalakrishnan said the rally is one part of several efforts by parents to get kids back into classrooms, such as speaking at board meetings and threatening a lawsuit, because they are concerned their kids are losing out on more effective in-person learning, and are facing social isolation.

“We need to do everything we can,” she said. “Our students deserve to come back to school.”

Bob Bates, a parent who helped organize the demand letter and started a GoFundMe to help pay attorney fees, said parents are hoping for “some kind of intervention” between the district and teachers union to get them to an agreement on reopening schools.

He said the district was at “such an impasse with the union, that it didn’t seem the two parties could resolve things on their own.”

Lee Andelin, the attorney representing a group of Fremont parents, is doing similar work for parent groups agitating for school reopening around the state, including in Walnut Creek.

Many parents at the rally placed the blame for continued closure of schools on the teachers union, the Fremont Unified District Teachers Association.

Some claimed the union have made unreasonable demands, ranging from extra pay for teaching in hybrid learning models, or what some parents categorized as “social justice” efforts, like asking that the district not contract to have any law enforcement on campus for secondary school campuses during the year, and that teachers get restorative practices training.

Union president Victoria Birbeck-Herrera said parents blaming the union for the lack of open schools are oversimplifying negotiations in which she said the district was very rigid on what kind of reopening plans it would accept, and are making teachers feel undervalued.

“It does not benefit anyone to keep telling teachers they are expected to do whatever they are asked without compensation for their work, in a profession already paying less than comparable fields for their education,” she said.

Birbeck-Herrera has said the hybrid learning models would have required more work on the part of teachers, which is why they requested one-time increases in pay during negotiations.

She said demands over keeping police away from campuses, and restorative practices training, were dropped by the union “as soon as it was clear the district was not going to engage” on those topics.

The union has said it is willing to continue to negotiate over a return to classrooms in the spring, but the district has chosen to stop negotiating for the spring, and put its focus on expanding limited learning hubs for some students for the remainder of this school year.

While many parents said while they’re still hopeful they can salvage what’s left of the school year with in-person instruction, some, like Matthew Muller, said they’re mainly concerned about ensuring there is full in-person learning in the upcoming school year in the fall.

“It’s time for my kids to go back to school,” Muller said while at the rally.

“I want to be confident that if things are safe, that the union and the district are going to come together and come to a reasonable agreement that puts the kids back in school,” he said.

Right now, Muller said, “I’m not confident.” He said he’s looking for a “good faith” effort from both the district and the teachers union.

Jamie Black Phillips, a teacher in the district who also has two kids in its schools, left the union because she was frustrated with its leadership’s priorities and its approach to some issues including the possible removal of Fremont police officers from high school campuses.

She hopes Gov. Gavin Newsom issues a mandate to require all schools reopen for in-person instruction in the fall, so parents can be assured it will happen.

“There’s no mandate and there’s no guarantee right now, and that’s statewide,” she said.