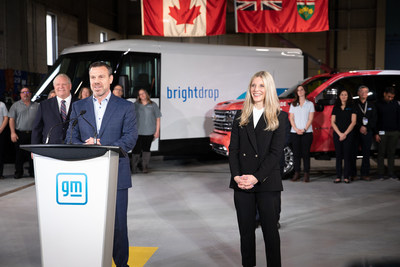 Together with the federal and Ontario governments, GM Canada made these announcements at the recently opened Canadian Technical Centre’s (CTC) McLaughlin Advanced Technology Track in Oshawa, Ontario, highlighting the company’s more than $2 billion in investments to transform its manufacturing operations.

Production of BrightDrop’s electric delivery vans will begin at CAMI Assembly in Ingersoll, Ontario in December 2022, following retooling of the plant this spring and summer.

BrightDrop’s first electric delivery van, the BrightDrop Zevo 600 (formerly EV600) was on hand for demonstrations. Also on hand was their new BrightDrop Trace (formerly EP1) electric carts, which were developed and tested in large part by GM’s CTC team in Ontario.

GM Canada also announced the Oshawa Assembly plant will be adding light-duty pickup production and a third shift of production in the coming months. As a result, Oshawa will be the only GM plant producing both heavy-duty and light-duty pickups, enabling flexibility and responsiveness to the North American market.

With the addition of the third shift, GM Canada will have added more than 2,600 new jobs in the Oshawa plant since it reopened. Fifty per cent of new production hires at the Oshawa plant are women, reflecting GM’s focus on diversity in the workplace.

GM also announced it will sign onto the Canada Diversity Challenge and the Canada Net Zero Challenge.

“Working with our government partners we have reopened GM’s Oshawa plant, creating thousands of new jobs and recruiting a record number of women in production roles,” said Marissa West, GM Canada president and managing director. “Later this year, our CAMI plant in Ingersoll will begin Canada’s first full-scale electric vehicle manufacturing with BrightDrop. This partnership with the Governments of Ontario and Canada is helping GM build a more diverse, innovative and sustainable industry and EV supply chain for the future – and we are proud to be doing that right here in Canada.”

“In Oshawa, Ingersoll, and communities across Ontario, auto manufacturers are stepping up to meet demand for clean vehicles and creating thousands of good jobs in the process. Today’s investment is an investment in our workers, our communities, and our future. Partnerships like these are critical to putting Canada on the cutting edge of the clean economy, creating thousands of new jobs, and making sure that future generations have a clean environment to live in.”

“This vote of confidence by General Motors in Ontario is more proof that by attracting game-changing investments our government is securing our auto sector for the next generation of workers. This investment will secure 2,600 jobs here in Oshawa and is a huge win for the people of Durham and Ontario’s auto sector. It shows once again that the cars of the future will be made right here in Ontario by Ontario workers.”

“This is proof that Canada’s auto sector is here for the long term. What today’s announcement means for Canadians is more jobs, more clean vehicles and more economic growth. GM’s continued commitment to its facilities in Canada, and its decision to set up the country’s first electric vehicle production facility, highlight how Canada is a world leader in building the vehicles of the future.”

“Ontario is proud to support GM’s major investment in their Oshawa and Ingersoll plants to manufacture the company’s next-generation models, including the new all-electric BrightDrop commercial vehicle. By reducing the cost of doing business in Ontario by nearly $7 billion annually, our government has created the right economic conditions to attract yet another historic investment that further positions Ontario as a North American leader in developing and building the cars of the future.”

General Motors of Canada is headquartered in Oshawa, Ontario and is part of a global company that is committed to delivering safer, better and more sustainable ways for people to get around. In Canada, General Motors markets Chevrolet, Buick, GMC and Cadillac vehicles through our strong Canadian network of dealers, as well as OnStar services. More information can be found at www.gm.ca or by following @GMCanada on Twitter and Instagram.

Cautionary Note on Forward-Looking Statements: This press release may include “forward-looking statements” within the meaning of the U.S. federal securities laws. Forward-looking statements are any statements other than statements of historical fact. Forward-looking statements represent our current judgment about possible future events and are often identified by words such as “aim,” “anticipate,” “appears,” “approximately,” “believe,” “continue,” “could,” “designed,” “effect,” “estimate,” “evaluate,” “expect,” “forecast,” “goal,” “initiative,” “intend,” “may,” “objective,” “outlook,” “plan,” “potential,” “priorities,” “project,” “pursue,” “seek,” “should,” “target,” “when,” “will,” “would,” or the negative of any of those words or similar expressions. In making these statements, we rely upon assumptions and analysis based on our experience and perception of historical trends, current conditions and expected future developments, as well as other factors we consider appropriate under the circumstances. We believe these judgments are reasonable, but these statements are not guarantees of any future events or financial results, and our actual result may differ materially due to a variety of important factors, many of which are described in our Annual Report on Form 10-K, our subsequently filed Quarterly Reports on Form 10 Q, and our other filings with the U.S. Securities and Exchange Commission. We caution readers not to place undue reliance on forward-looking statements. Forward-looking statements speak only as of the date they are made, and we undertake no obligation to update publicly or otherwise revise any forward-looking statements, whether as a result of new information, future events or other factors that affect the subject of these statements, except where we are expressly required to do so by law.