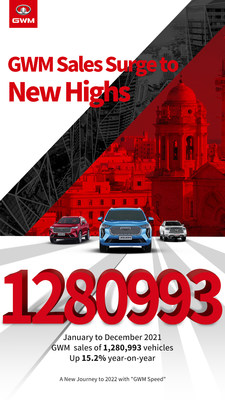 BAODING, China, Jan. 13, 2022 /PRNewswire/ — GWM released the latest sales data on January 6 that the company registered a volume of nearly 1.3 million vehicles in 2021, up 15.2% year-on-year, which marks the new record that the sales have been more than one million units for six consecutive years.

Under the challenging conditions of the global pandemic, GWM has still seen surging sales growth. The official data showed that in the latest December, 162,369 new vehicles were sold, a month-on-month increase of 32.5%.

The trendy HAVAL JOLION, the highly intelligent HAVAL H6 HEV and many other new models attracted users across the globe, becoming the stars in the SUV segment. Statistics showed that HAVAL H6 HEV has won the top two in the Thai C-class SUV market for five consecutive months.

GWM pickup also performed well, which sold a total of 233,006 units, the main contributor to which was the spread of GWM pickup in more than 50 countries and regions, including Australia, Chile, South Africa and Egypt. GWM POER and WINGLE became co-drivers for GWM pickup’s sales, resulting in total cumulative global sales of 2 million units.

As the world’s new-generation intelligent and safe pickup, GWM POER was awarded the latest stringent A-NCAP five-star safety ratings in Australia, which has shown as the new benchmark in the entire industry. This achievement made GWM POER become “one of the top three safe pickup brands in Australia“.

Particularly, in terms of vehicle performance, GWM POER features a 3.5T drag force, with strong off-road performance. Considering both utility and entertainment features, it became a favorite among users, catering to various usage scenarios such as lure fishing and camping. In the annual model selection organized by Autocar, GWM POER was awarded “The Best Model of the Year.”

With the popularization of electric vehicles, GWM in this wave has built several new energy routes including hybrid and all-electric technologies and launched a variety of new energy models through early planning years of R&D.

Seeking Alpha, the website with crowd-sourced content for financial service, displayed that in the sales ranking of global electric vehicle manufacturers, GWM ranked 13th with a 2.1% market share.

Based on such outstanding sales performance, in 2022, GWM’s HAVAL, ORA, TANK and other brands will continue to launch products featuring different styles to continuously keep sales growth momentum.