HBO’s ‘The White Lotus’ elevates tension to an art form

If anyone refers to “Sunday Scaries” during August, I will assume they are talking about watching HBO’s The White Lotus.

Mike White’s miniseries follows a crooked crew of wealthy tourists and skeptical staff at a luxury resort in Hawaii. Episode 1 establishes that someone will indeed die during their weeklong stay, but we don’t know who, how, or when, and the uncertainty, per Mashable’s Alexis Nedd, is enough to make you “chip a molar.”

Plenty of shows and movies tease a Big Event in the beginning and then spend their runtime revealing how it happened — so why is The White Lotus so exceptionally stressful? The sun-drenched paradise setting swiftly becomes threatening instead of inviting, and White’s direction offers scarcely a breather from constant foreboding about what the hell is going to go wrong.

White expertly ties all the characters together in scene after scene through montages; even when they aren’t crossing paths or even in the same location, he and the editors cut rapidly between concurrent action while Cristobal Tapia de Veer’s score heightens the anxiety by approximately 7000%.

There is normal stress, and then there is ‘White Lotus’ stress, amped up to 1000 by these two.
Credit: hbo

“[White] wanted to have the music bubbling all the time underneath, with the characters and adding some sense of tension or mystery,” Tapia de Veer told Mashable in a Zoom interview. “I thought that people could find the music groovy or whatever, but I didn’t think people were going to pick all the subliminal dark stuff that’s happening in there.”

Tapia de Veer likened the White Lotus‘s characters to animals in a zoo who appear domesticated but are actually wild. In some scenes, he said, “the music is laughing at them.” He uses tribal drums, primitive flutes, and even real animal noises to underscore this. The resultant “harmonic tension” (“I don’t think I have one flute that is in tune with another flute”) can be jarring, especially to those accustomed to Western music.

This points to another source of boiling unrest that the show finally calls out in episode 4: the legacy of colonialism. Most of White Lotus‘ characters are rich and white, and the few that aren’t are either working for rich whites, or visiting on their dime — like Paula (Brittany O’Grady), who exits in the middle of dinner because she can’t stand watching Native Hawaiians enact a luau performance for the very people who stole their land. She and Olivia (Sydney Sweeney) try to explain race and gender dynamics to Nicole (Connie Britton), but to little effect. For three episodes these characters could have been naïve to their rampant privilege; as of now, they are willfully choosing to turn a blind eye.

The girls have their own drama now, with Paula sneaking out nightly to hook up with Kai (Kekoa Kekumano) because she’s afraid Olivia will try to take him if she finds out. Olivia, on her own power trip, responds by doing exactly that, flirting with Kai at the luau. Maybe it’s the fact that Sweeney plays a terrifying teen so well (we all remember Sharp Objects!), but every interaction with Olivia is one errant eye roll from leaving the other party shattered. But what’s a luau without a roast? 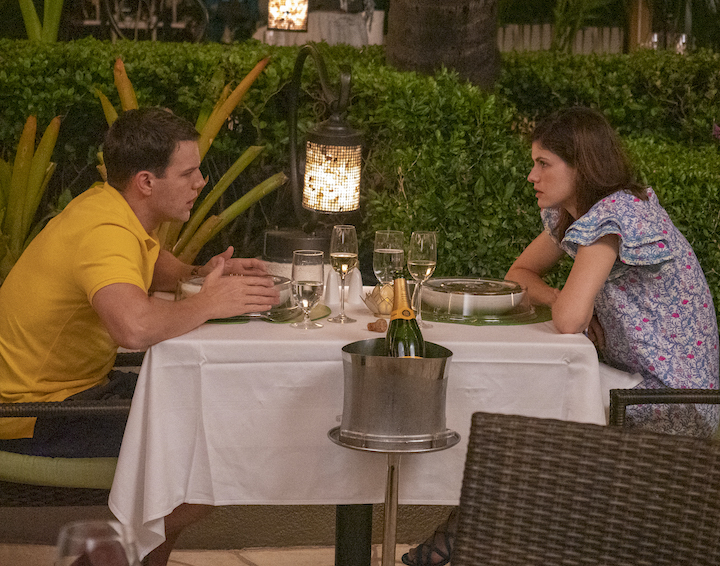 Desperate to know when and how this horrible marriage will end!
Credit: hbo

All these elements come together expertly because White is a master of his voice. The show’s dark comic tone hits exactly that part of your brain that wants to cringe, hide, and also watch even more closely. It practically incites the muscles in your jaw to grimace with dread and secondhand embarrassment. Every light moment peels away at something more insidious, and by episode 6 that’s all we’ll be left with. The White Lotus resort may not include a theme park, but it is one harrowing rollercoaster.

The White Lotus airs Sundays at 9 p.m. on HBO and HBO Max.