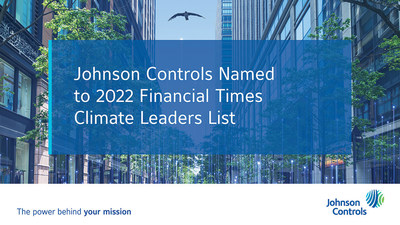 CORK, Ireland, April 7, 2022 /PRNewswire/ — Johnson Controls (NYSE: JCI), the global leader for smart, healthy and sustainable buildings, today announced that it has been named to the FT Climate Leaders in Europe list for a second consecutive year.

Research shows that almost 40% of greenhouse gases come from buildings

Europe’s 2022 Climate Leaders list recognizes companies across Europe that have shown the highest reduction of their emissions intensity between 2015 and 2020, which is measured by greenhouse gas emissions relative to revenue. Johnson Controls was one of only 400 companies selected from more than 4,000 across Europe.

“Being recognized by the Financial Times for a second consecutive year as a climate leader in Europe is a particularly meaningful and illustrious honor for us,” said Tomas Brannemo, vice president and president, Building Solutions Europe, Middle East, Africa and Latin America, Johnson Controls. “Sustainability has always been one of our key strategic pillars and as the critical climate change battle continues, it is important for Johnson Controls to keep leading the way in cutting emissions and delivering clean, smart and sustainable solutions for our customers and communities around the world.”

Among the earliest industrial companies to report emissions and pledge emission reductions, Johnson Controls has made tremendous progress – reducing carbon emissions and energy intensity by more than 70 percent since 2002. It was recently named #1 in its industry group and #12 overall as one of the 100 Most Sustainable Corporations in the World and is one of just 45 corporations awarded the Terra Carta Seal which recognizes private sector companies who are creating genuinely sustainable markets.

Research shows that almost 40% of greenhouse gases come from buildings, and as the EU seeks to become carbon neutral by 2050, Johnson Controls remains at the forefront of effectively turning the ambition into a reality through the decarbonization of buildings. Last year, the European Commission committed to cut greenhouse gas emissions from their 1990 levels by at least 55% by 2030 under the European Green Deal. The European Energy Performance of Buildings Directive will be an important pathway on how to drive down carbon emissions from buildings.

Through the deployment of its OpenBlue digital platform, Johnson Controls utilizes digitalization as a key enabler for the building renovation wave in Europe and the rest of the world. OpenBlue net zero solutions allow for the sustainable optimization of buildings, and Johnson Controls has seen a significant improvement in environmental impact by helping customers consume less energy, conserve resources, and identify pathways to achieving healthy, net zero carbon communities.

“Our Sustainability efforts boost our customers’ bottom line and help protect the planet by enhancing efficiency and cutting waste. We put the best technology to work so that buildings become flexible assets that are part of the smart, clean infrastructure needed to meet carbon reduction goals,” said Katie McGinty, vice president & chief sustainability and external relations officer at Johnson Controls. “Being at the forefront helping to drive efforts to tackle global climate change is part of our DNA, and we are dedicated to supporting a healthy planet, healthy people and healthy places.”

Johnson Controls continues to take significant steps to further improve its environmental impact and has committed to achieving net zero Scope 1 and 2 carbon emissions by 2040 – ten years ahead of the Paris Climate Agreement goal. By 2030, the company aims to cut its Scope 1 and 2 emissions by 55 percent and Scope 3 emissions by 16 percent. These ambitious 2030 emissions reduction targets have been approved by the Science Based Targets initiative.

About Johnson Controls
At Johnson Controls (NYSE:JCI), we transform the environments where people live, work, learn and play. As the global leader in smart, healthy and sustainable buildings, our mission is to reimagine the performance of buildings to serve people, places and the planet.

With a history of more than 135 years of innovation, Johnson Controls delivers the blueprint of the future for industries such as healthcare, schools, data centers, airports, stadiums, manufacturing and beyond through its comprehensive digital offering, OpenBlue. With a global team of 100,000 experts in more than 150 countries, Johnson Controls offers the world`s largest portfolio of building technology, software as well as service solutions with some of the most trusted names in the industry. For more information, visit www.johnsoncontrols.com or follow us @johnsoncontrolson Twitter.