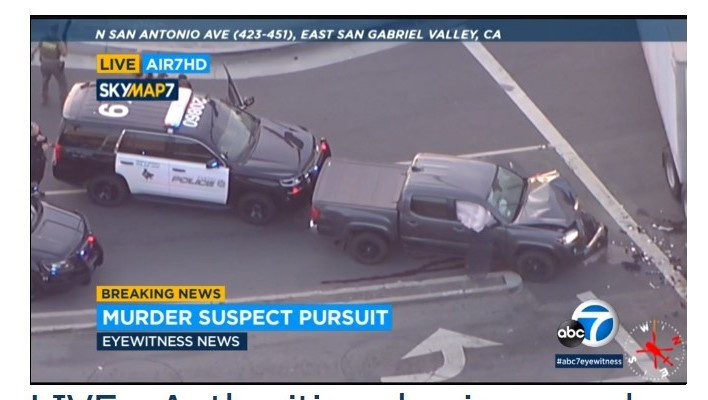 A motorist who careened toward oncoming traffic, snaked through crowded parking lots and rolled onto sidewalks while pursued by law enforcement through portions of four counties crashed into a big rig in Pomona before he was taken into custody Tuesday, April 6.

#BREAKING: Suspect crashes into tractor-trailer in Pomona, bringing an end to dangerous pursuithttps://t.co/CPZJJgrCJ3

Riverside County Sheriff’s officials announced they were in pursuit of a suspect in a Twitter post at 6:05 p.m. Media reports suggested a murder suspect was behind the wheel of the the black pickup chased by Riverside County Sheriff’s deputies and California Highway Patrol officers. It was seen racing up to 90 mph in live footage of the pursuit, before its front end slammed into the passenger side of a tractor-trailer in the Pomona area at about 7 p.m.

At times, the motorist stuck his arms out the pickup’s driver-side window to gesture at police and news crews while he sped up and down the 60 Freeway and weaved through traffic on side streets. The vehicle exited the freeway and was in the area of Pomona when it slammed into a big rig that was hauling a trailer. It was rendered disabled, with a smashed front end, deployed airbags and fluids pooling beneath it.

Police ordered the driver to exit the vehicle at gunpoint. He crawled on his belly toward officers and was taken into custody. A passenger wearing high heels also got out, walked backwards toward police and was cuffed.

Broadcast coverage said the suspect had traveled through Riverside, San Diego, San Bernardino and Los Angeles counties during the chase.

Further information was not immediately available.

This is a developing story.