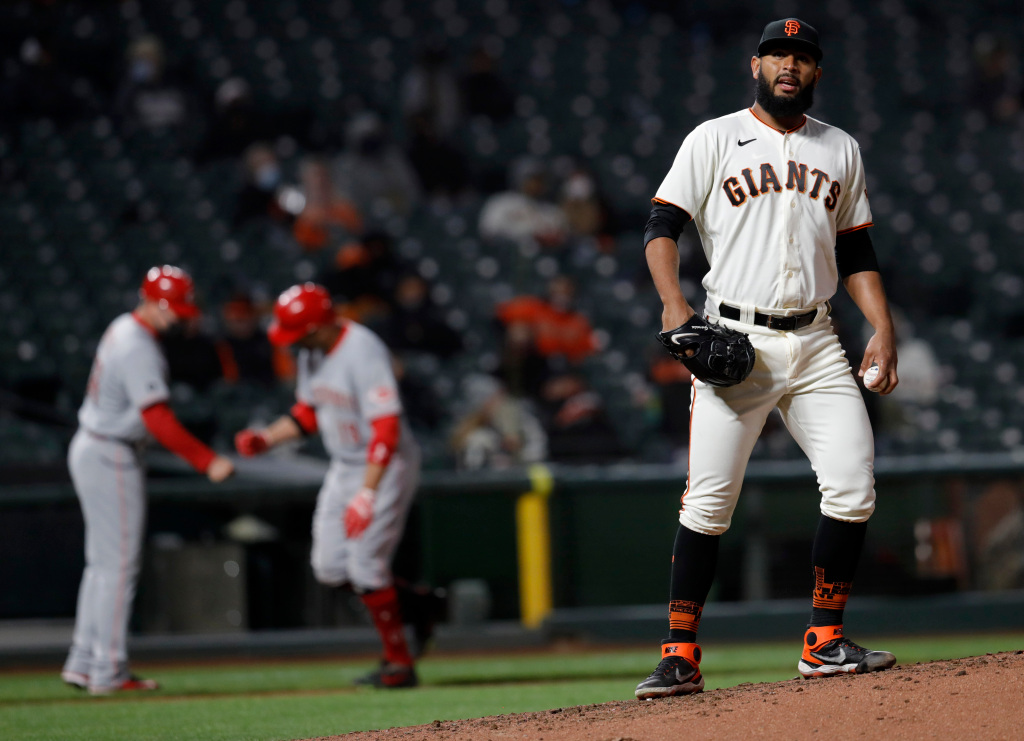 SAN FRANCISCO — Through the first nine games of the season, the Giants’ starting rotation was so good that it was mostly able to mask the team’s biggest deficiency so far.

The Giants’ lineup isn’t hitting and after a 3-0 loss to the Cincinnati Reds on Monday in their tenth game of the year, concerns about the club’s lackluster offense are continuing to grow.

Right-hander Aaron Sanchez turned in a solid start for the Giants in their series opener, but was lifted in the bottom of the fifth with two outs and Brandon Crawford standing on first base. Sanchez’s turn in the order came up and Gabe Kapler realized that his offense might not have many better scoring opportunities.

Unfortunately for Kapler, the Giants and the 3,662 fans in attendance on Monday at Oracle Park, the manager was right.

Pinch hitter Tommy La Stella hit a soft groundout to the left side of the infield to end the inning on a night, squandering an opportunity against Reds starter Wade Miley that couldn’t even be defined as a rally.

“(Sanchez) was efficient enough and I think he had a little more in the tank,” Kapler said. “He could have given us another inning. At that point in the game, you have to find a way to score some runs. You have to score runs to win a baseball game and we had some weapons on the bench and decided to go to the bench.”

The rest of the night was as uneventful as you’d expect for a lineup that was held scoreless for the second time this season and hasn’t scored more than four runs in a game since April 2.

“I think overall we’ve gotten some big hits, but I don’t think this is the type of offense that we are,” Kapler said of the team’s offense, which is averaging 3.1 runs per game this year. “I think we’re the type of offense that sees a lot of pitches, that gets pitchers on the ropes and gets big hits and produces big innings. We haven’t seen that consistently.”

Sanchez wasn’t dominant on Monday, but he managed to hold a Reds offense that entered Monday’s game leading the majors with 7.33 runs per game to two runs in 5.0 innings. The right-hander missed all of last season while recovering from a 2019 shoulder surgery and while his fastball velocity is a few ticks below where Sanchez would like it to be, he’s been effective against both San Diego and Cincinnati.

Aside from leaving a 3-1 fastball over the heart of the plate that Reds leadoff man Jesse Winker launched into the Giants’ bullpen for a two-run home run, Sanchez was mostly able to induce soft contact and gave his defense a chance to make plenty of routine plays.

“When you’re in the big leagues, I feel like you’ve got to come correct every night,” Sanchez said. “For me tonight, when I got ahead, I was dominant. When I fell behind, I got in trouble. For me, it’s more or less just staying ahead and the outcomes are on my side.”

Sanchez extended the Giants’ streak to 10 consecutive outings of at least 5.0 innings for their starters, which matches the 1937 club for the second-longest stretch to open a season in franchise history. The first Reds batter who didn’t have to face Sanchez, Joey Votto, yanked the second pitch he saw from lefty Jarlín García over the right field wall to extend Cincinnati’s lead to 3-0.

Finding ways to get their veteran hitters rolling is clearly the Giants’ top priority, but finding ways to encourage fans to come out to Oracle Park is also an issue the organization is taking seriously, particularly because their players feed off the energy.

“It’s always nice to pitch in front of a home crowd and when you’ve got them rooting for you in any situation, so that was cool,” Sanchez said. “I love when the fans bring energy, obviously it pumps me up.”

The city of San Francisco is permitting the Giants to open Oracle Park at 22% capacity during the month of April, but the franchise has been unable to sell out any of its four home games and saw attendance fall sharply for Monday night’s game against the Reds. After announcing a crowd of 7,390 for the club’s home opener on Friday, the Giants tickets sales were cut by more than half for their series opener against the Reds.

One of the primary factors in the low ticket sales is a city health order announced in late March that mandates the Giants to be one of only a handful of teams in the majors to require fans to show proof of a full vaccination or a negative COVID-19 test within 72 hours of a game to attend.

The health order is expected to be adjusted at some point during the first half of the season and the Giants should soon be allowed to expand their capacity, but when that happens, they’ll need more than just solid pitching to entice fans to show up.